Whether you’re just starting Warframe or you need some extra help, this guide offers some tips and tricks to survive the system’s most ominous adventures.

The Grineer Queens have dispatched the ruthless Captain Vor to grow their empire. Part and parcel of his Mission is the elimination of you, the Tenno threat. Awaken from Cryosleep, rebuild the segments of your Orbiter, and free yourself from Vor’s clutches. 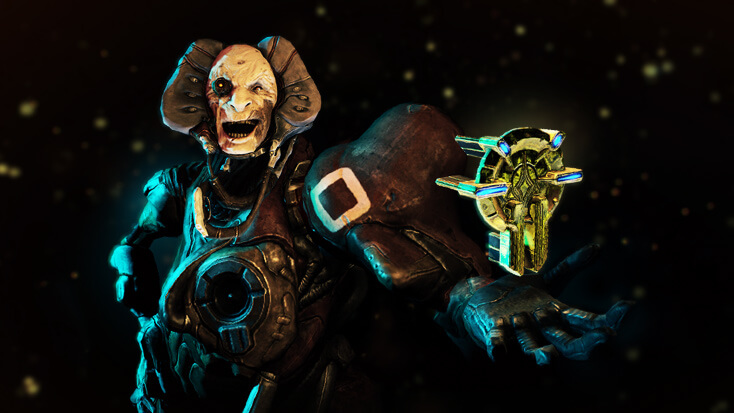 “For generations you’ve slept, no purpose, no cause to wake you. But now, something has risen from the ruins of the Old War” - Lotus

NOTE: If you skipped this Quest when the Quest System was introduced, it will be considered completed and will not affect future Quest unlocks.

Vor’s Prize sends you on a number of Missions across Earth as you raid Grineer settlements, factories and outposts in search of components and segments to repair your Orbiter. Make sure you check the Quest Tab in Navigation to see where you need to go next!

Remember to go to your Arsenal and upgrade your Warframe and Weapons with the Mods you receive to make yourself more powerful!

To equip a Mod:

If you're unsure how to Mod your equipment, use the Auto-Install feature by going to “Upgrade” then clicking “Actions” followed by “Auto-Install.” It’s a great way to get experience with the system and in no time you’ll be a master of Modding!

Captain Vor has placed an Ascaris device on your Warframe -- technology specifically designed for capturing Tenno and their Warframes. To remove it, follow the steps below.

Vor’s Prize is just the start of your exciting adventure in the Origin System, Tenno. Take your new-found powers and restore order to a chaotic Solar System! Your next objective is the Once Awake Quest!

According to intercepted messages, the Grineer are experimenting with some sort of biological weapon. Details are sparse, but the messages originated from Mercury. Go there and find out what the Grineer are up to. 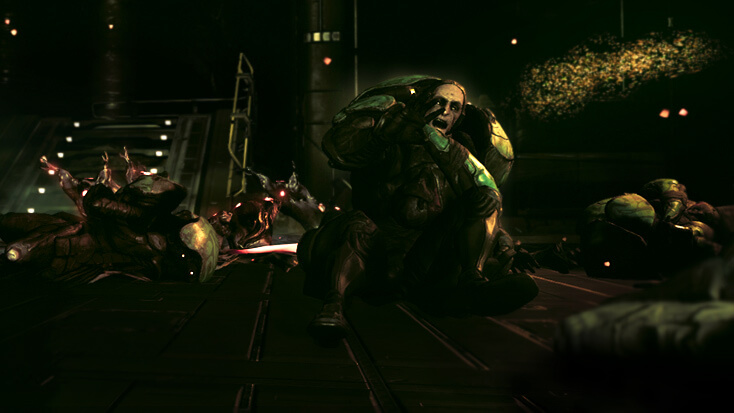 “Additional test Marines have arrived. The [redacted] tore through the previous batch much faster than expected.” - Doctor Tengus

Complete the Mercury Junction on Venus, which requires you to:

The first Mission is a Spy Mission, so bring a few Ciphers in case you get caught and need to quickly hack puzzles. Ciphers can be crafted at the Foundry.

Heat Damage is very useful in this Quest (Tip: If you have any Heat Damage Mods, equip them! To equip a Mod to your Weapon, go to the Arsenal in your Ship, choose your Weapon, and select “Upgrade.” Select the Mod you wish to equip, then select an open Mod Slot to equip it.)

Head to M Prime and successfully recover three Data Units. This data will give you the information you need to continue your investigation into the Grineer’s biological experiments.

Begin your battle against the Balor Fomorian

The Grineer have completed construction of their ultimate warship, the Balor Fomorian. As Tenno, you must bring down this metal monstrosity, but you don’t have the necessary tools -- not yet. 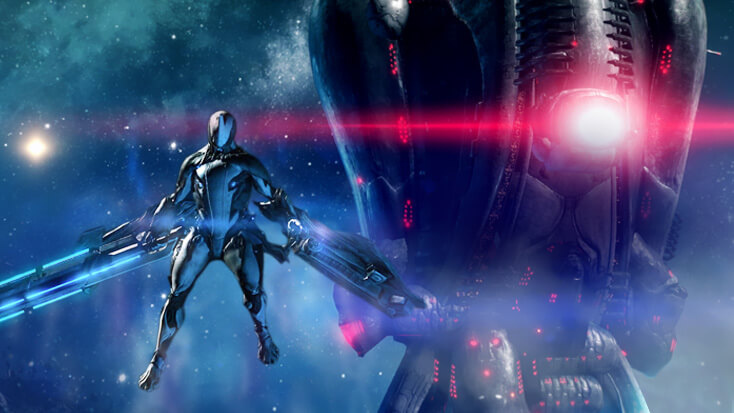 “The Balor Fomorians are coming but you will be ready.” - Lotus

You must have completed the Mars Junction, which requires you to:

The Archwing Quest has a variety of Mission types, including Excavation and Spy, so it might help to bring some extra Equipment such as Ciphers or Energy Restores along.

You must uncover and construct your very own Archwing to take the battle to the vacuum of space or deep seas. Over the course of this Quest you must complete the following Missions:

Archwings are a totally new way to play Warframe and have unique Weapons and Mods for you to upgrade and experiment with. Try out different combinations and find your perfect playstyle! Completing The Archwing Quest will grant Tenno an Odonata Archwing of their very own. You’ll need your Archwing to explore the watery depths of Uranus, complete the Limbo Theorem Quest, or use it to zip across the Plains of Eidolon in a flash!

Track down a thief-for-hire and recover the Arcane Codices

The Grineer are searching for the Arcane Codices, mysterious artifacts the Grineer hope will cure their clone defects. But their plans are ruined when a contracted thief named Maroo steals the last Codex and goes into hiding. Tenno, find Maroo and recover the Codices. 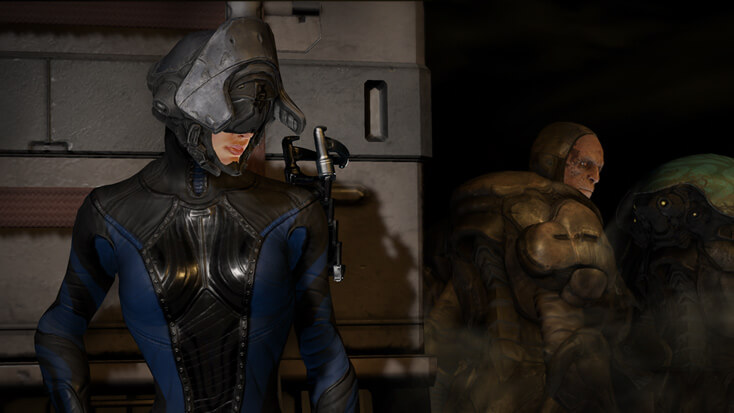 “Hushed and empty is the womb of the sky.” - Unknown

Complete the Phobos Junction on Mars, which requires you to:

Most of the Missions in this Quest are Spy Missions, so bring a few Ciphers in case you get caught and need to quickly hack puzzles. Ciphers can be crafted at the Foundry.

This Quest introduces Sensor Regulators in Spy Missions. Shooting these floating drones or being seen by them will trigger the alarms!

Find Maroo, and then use her insider information to break into Data Vaults and find the Arcane Codices!

Uncover the Mystery of Chroma

Cephalon Simaris needs your assistance, Tenno. Simaris discovered a curious anomaly on Ceres and dispatched a team of Sentinels to investigate. The Sentinels did not return. It falls to you to investigate this anomaly. Are you ready, Tenno? 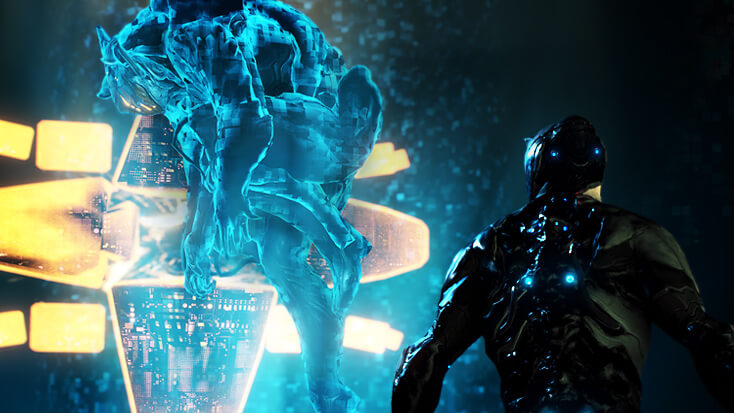 “Here we shall search and find. The eyes of day drinking the night.” - Unknown

You must have completed the Europa Junction, which requires you to:

Part of this Quest involves scanning Synthesis Targets for Cephalon Simaris, so make sure you visit Simaris in any Relay to stock up on Synthesis Scanners and Kinetic Siphon Traps!

Simaris has tasked you with investigating what he calls a “curious anomaly.” Follow his instructions, track down the mysterious transmissions, and uncover the mystery of Chroma!

Learn more about the Lotus

Strange drones on Uranus will shine a light on Warframe’s biggest mysteries, some of which are answered in this Quest and others remain to be discovered in the cinematic Quests beyond. 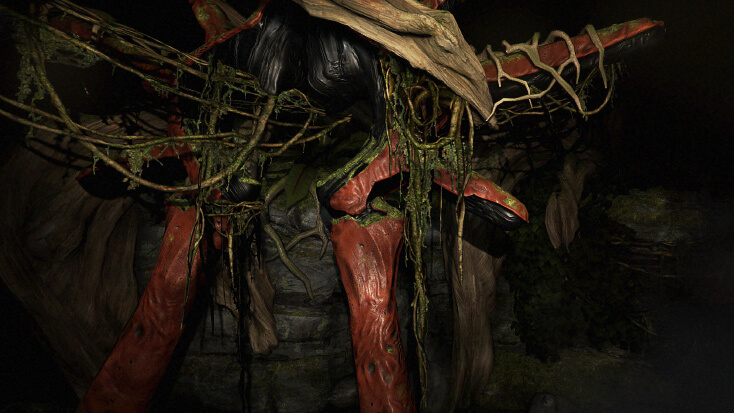 “You want to know why they are here? Cause I found it! The tomb!” - Tyl Regor

Unlock the Uranus Junction, which requires you to:

After scanning an Oculyst, you’ll receive an Inbox message from the Lotus that will begin the Quest.

This Quest will require you to scan wreckage from the Old War. Unlike most scannable objects so far, this one is BIG.

After you receive the Inbox message from the Lotus she will send you to Gaia on Earth to find mysterious drones from an age long past. After you scan the wreckage, you’ll be tasked to scan two more Oculyst scouts. Don’t let them notice you!

Discover who you really are

An ancient threat re-emerges, which pulls back the veil on the Old War, the Tenno and the intricate history of Warframe’s universe. 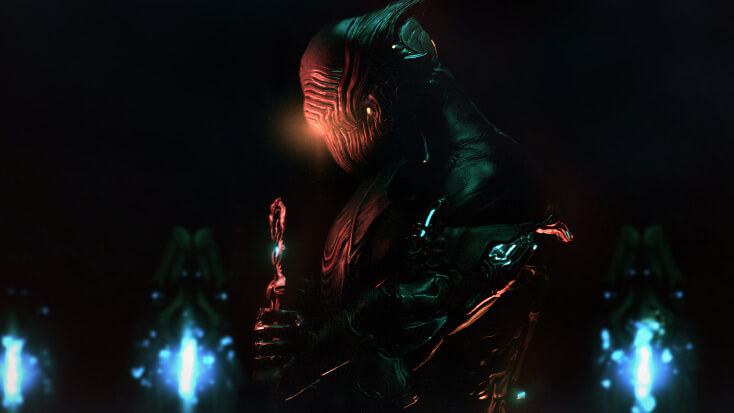 Unlock the Neptune Junction, which requires you to:

Prepare for a challenging cinematic experience by bringing your strongest -- and favorite -- Warframe and weapons (Primary, Secondary and Melee). You'll be encountering enemies unlike those you've ever seen before.

A certain Mission will require you to locate an object without any guidance. Explore until you find it!

Head to Umbriel, Uranus to locate more information on the Reservoir, the source of the Tenno’s power. Once you have that info, your path will lead to new locations previously hidden to you.

Learn the truth of your past to shape your future

As the follow up to The Second Dream, The War Within will take your Tenno on a journey to discover their origins and awaken to their true potential. 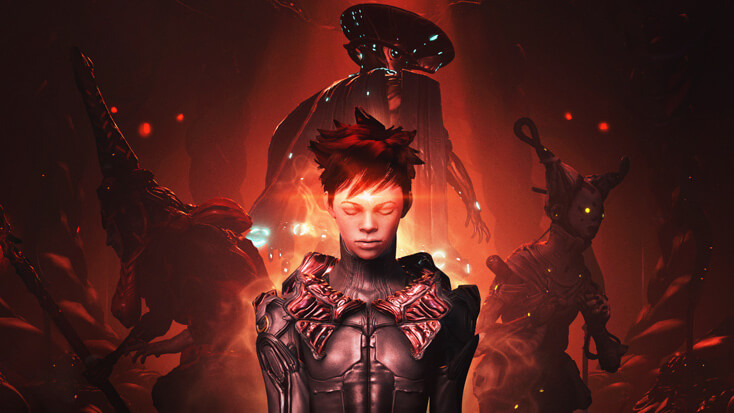 “But the dreamers have awakened. They will come for us.” -Worm Queen

Complete the Sedna Junction which requires you to:

The War Within will require you to find Capture targets; however, these are not your average targets. When threatened, they will attack with deadly precision. Keep your wits about you, Tenno!

There are sections of The War Within that require you to play Solo, as well as sections where you will be unable to abort the Mission or return to your Orbiter to change your Arsenal Loadout until it is completed. Make sure you’re ready for a challenge when attempting The War Within.

The Lotus has sensed a disturbance in the Reservoir on Lua and you must investigate, Tenno. Although there is far more going on behind the scenes than even the Lotus could have predicted. Be vigilant, Tenno, and seek out the truth wherever it hides.

The War Within is essential in order to grow your Tenno and become the warrior you were meant to be.

Reveal the mysteries behind an abandoned Steel Meridian ship and the horrors that lie within.

Chains of Harrow is one of Warframe’s darkest Quests yet. Follow the source of a mysterious transmission to an abandoned Steel Meridian ship and learn more about the one they call Rell. 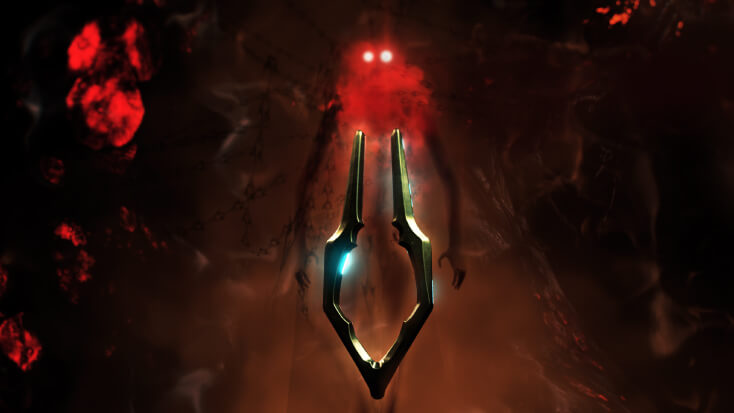 Ordis receives a strange transmission from the Red Veil Syndicate. Head to Earth to investigate the source of the message and discover what happened to Rell. This Quest will open the door to new locations and strange new characters.

How long have we waited for this moment?

You’ve started on the warrior’s path. You know what happened aboard the Zariman Ten-Zero. Now it’s time to learn the true nature of your most revered ally. 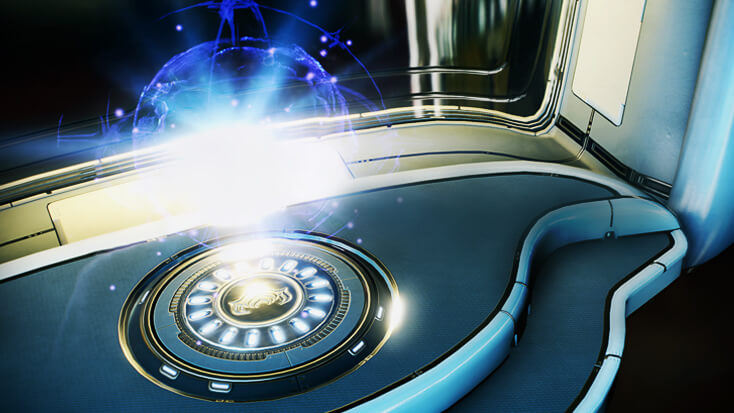 “My daughters... sons, I want you to know my last thoughts are of you.” -Margulis

This Quest sets off a sequence of events that are sure to change the Origin System as you know it, Tenno.

Once you're on Lua, follow the glowing energy trail left by the Lua Orb. Listen closely to the dialogue that plays as you search around -- what you'll learn will shine a new light on a familiar character.

Upon completion of the Apostasy Prologue, a familiar item will appear in your Personal Quarters.

A foreboding vision leads the Tenno on a hunt for a savage Warframe. 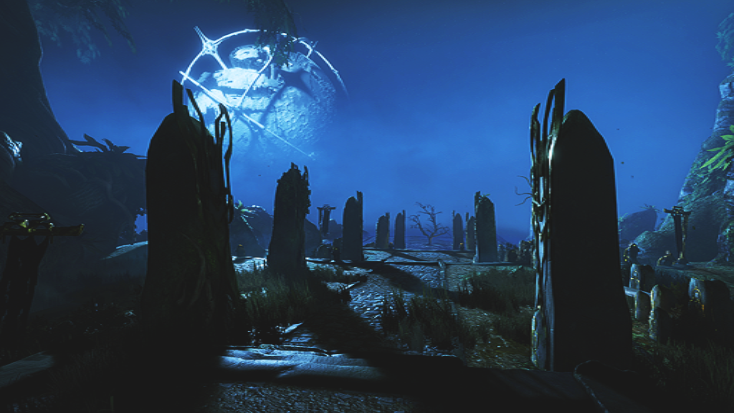 “Howl all you want, it won't bring him back.”

The Sacrifice will introduce some new enemies with devious new abilities.

Follow a mysterious vision to learn a piece of the Warframes’ secretive history. Investigate Sentient activity and try to uncover what -- or who -- has encouraged their heightened presence in the Origin System.

A unique addition to your Arsenal - complete the Sacrifice to discover its full potential! A weapon of Orokin origin.

A reunion with an old enemy will have unknown consequences for the Origin System.

There are some fates worse than death as an enemy of the Tenno finds out firsthand. Hear what they have to say and heed their warning. 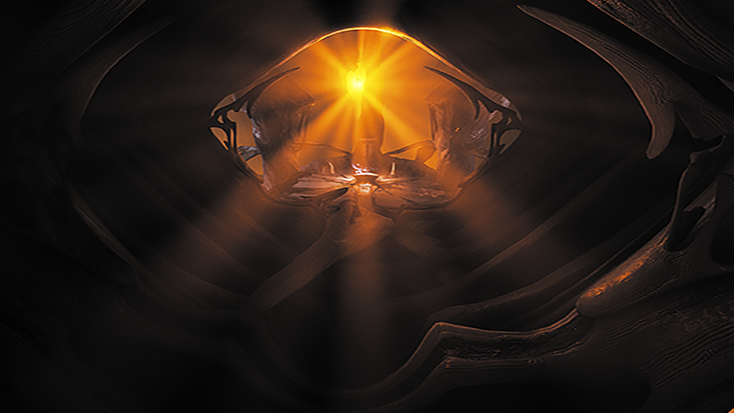 “So...tell me, devil. Do you understand what must be done?”

It’s important that you stay out of sight. Use your Void Dash if you hope to remain undetected.

Build the Dry Dock in your Clan Dojo to assemble a Railjack with the help of a new Cephalon! 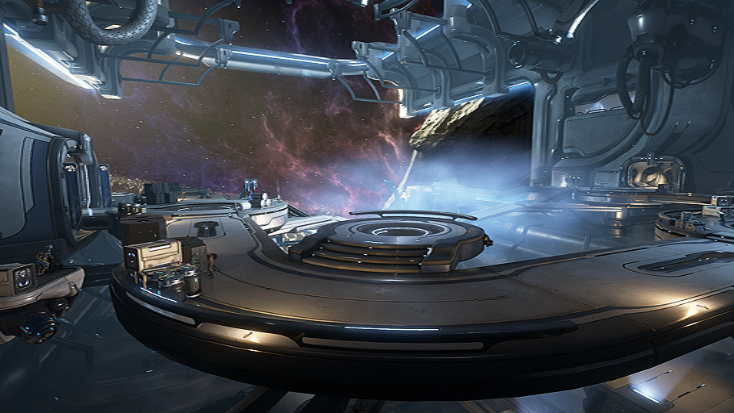 “Aboard this Railjack, we work before we play.”

The Railjack is a powerful piece of Old War technology. Each segment must be restored with careful precision -- a process that requires time and patience.

Track down Railjack pieces and defend them from attackers before you return to the Drydock and contribute resources to their construction! Complete and assemble all six pieces to finish your Railjack.