April 27th is the official release date of our next update, Angels of the Zariman, and Devstream 161 was completely dedicated to outlining the content coming to all platforms on that date!

If you want a deeper look at what to expect later this month, including Gyre, the Focus Rework, Incarnon Weapon Systems, new game modes, and more, we’ve outlined them all in the overview below.

- Our Nine Year Anniversary celebrations are on-going! Log in before May 2nd to receive your free Wisp Dex Skin, and participate in Alerts and Bonus Weekends all month long!
- Gift of the Lotus Alerts are live on all platforms for 24 hours after the stream. Don’t miss your chance at an Exilus Warframe Adapter Blueprint and an Exilus Weapon Adapter Blueprint.
- Cross-play and cross-save are still actively being worked on, but we don’t have any major news to share!

Our next major update is on the horizon, featuring a new Quest, new game modes, a new Warframe, and much, much more. For those wanting more details, we’ve separated what was covered into their own sections for deeper reading!

For those of you wanting to ensure you’re ready for the next Quest, we’ve compiled requirements for you below: 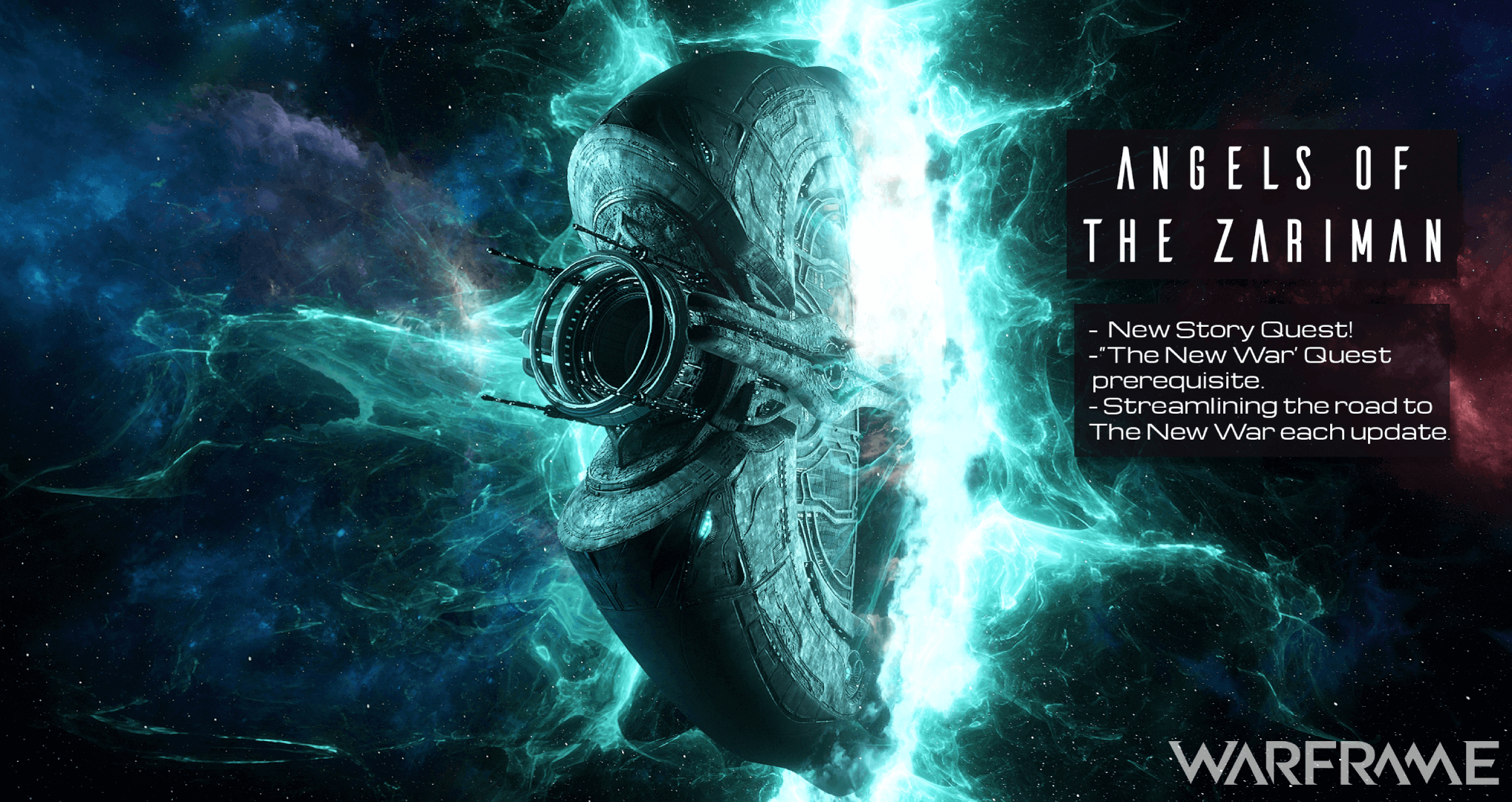 On the note of The New War requirement, the team is actively streamlining the road to the cinematic quest line for new players. Part of this includes revisiting Junction requirements, such as the “Build a Specter” requirement that offer large time gates for players. Another change is that Tenno who complete the Heart of Deimos Quest for the first time will be rewarded with the necessary Blueprints to craft a Voidrig Necramech, a required part of your Arsenal to play The New War. Keep an eye out for continued improvements in the future!

Previewed in our previous Devstream, let’s take a look at the next Warframe: Gyre! As a refresher, she is electricity-inspired, but in a much different route than Volt. In the clips below showcasing her abilities, you’ll see the ways our team has pushed the physics tech in-game in fun new ways for her kit!

In these clips, you’ll also get a look at her custom dash!

Gyre’s abilities have a 10% chance to deal critical damage for each Electrical status that affects the enemy.

Launch a Gyratory Sphere that will deal high damage on impact and periodically deal electrical shocks to nearby enemies. Hitting at least 3 enemies with the initial launch enhances damage.

Throw forward a Gyratory Sphere that will implode after 2 seconds, or can be manually triggered.
*Coil Horizon is Gyre’s Helminth Ability!

Gain a brief burst of increased Critical Chance and Energy Regen, with each kill extending duration. Casting is on a cooldown.

Gyre’s mechanisms spin at incredible speeds, generating an Electric Field that shocks nearby enemies. When Gyre gets a critical hit, a large electrical discharge will chain from the enemy that was hit to nearby enemies.

As is tradition, Gyre also comes with special cosmetics and weapons with her release!

This giant primary weapon cannon is Gyre’s signature weapon, which you can see in the clip below!

It is very important for the continued health of the game that we make design changes to our systems instead of constantly adding new. This is essentially going to require re-learning focus, but the pieces that make up this Focus 3.0 are stronger for moment-to-moment gameplay choices.

In short, the Focus rework touches two points:
Operator Gameplay, where we have introduced a Void Sling system to replace Void Dash, and where we are adding the use of ability keys to bring more functionality to the Operator.
Focus School Rework, which aims to boost the lesser used Schools by a) giving them more interesting and useful abilities, b) defining a clear role and gameplay style for each school, and c) incentivizing Warframe-Operator Transference as part of the core gameplay loop.

Here is a small look at how those two goals have manifested in-game:

We have prepared a Dev Workshop that covers what was discussed in the stream, so for a full recap, check it out here!

Links to Twitch Highlights where each Focus School’s nodes are showcased are included in the Dev Workshop above. Since they are still subject to change, we’ll save the final written descriptions of them for the patch notes!

Last Devstream we showed off the Void Flood mission, and now we’re previewing the Void Cascade mission. Void Armaggedon is another new mode players can expect, but we’re keeping it a surprise for actual release!

In the following gameplay clips, we have removed all transmissions to avoid spoilers for the Angels of the Zariman quest. You will be introduced to four new characters via that Questline, and so you’ll officially meet them then!

Void Cascade is an endless mission type that blends Operator and Warframe gameplay. Players work to prevent the Zariman from being overtaken by the Void by purging Exolisers from corruption.

A corrupted Exoliser is protected by an anti-transferrence bubble. As the Operator, you cleanse the Exolisers by shooting the Corruption with your Amp. Upon doing so, you come face to face with a new enemy that was “haunting it”. You can kill this enemy’s body, but their spirit can go on to take over other foes should you not vanquish it as well (with your Amp).

Make sure you do so, because these foes will continue to try to take back the Exolisers you have freed from them. As this is an endless mission, Tenno will have to continually purge and protect Exolisers to keep the Zariman safe!

As you might see in the clip above, we also wanted to give players an additional way to earn Focus in missions. With the Rework, enemies that require using the Operator to kill them will provide a flat amount of Focus to the Focus school currently equipped.

Angels of the Zariman - What Else is Coming!

First revealed in Devstream 160, we have more to share about the evolving weapons, aka Incarnon Weapon system coming with the Angels of the Zariman update. These will be available from a new vendor found in the Chrysalith!

We were inspired by the idea of evolving gear, as seen with the Protovyte cosmetics. For these special Incarnon weapons, players will have to unlock the Incarnon evolution levels by completing a variety of challenges. With each evolution, a player can select a Stat attribute for the weapon from a list of choices.

You can see how these evolutions and stat choices are represented in the video below.

We’ll be shipping three weapons of this type to start, which can be seen below:

You can see the weapon in its base form at the start, and how it has transformed into its Incarnon version later on in the mission:

In the first image, you’ll see the ceremonial base version of this secondary weapon. The second image is its Incarnon form, which can be activated in real time upon the completion of special Incarnon challenges! 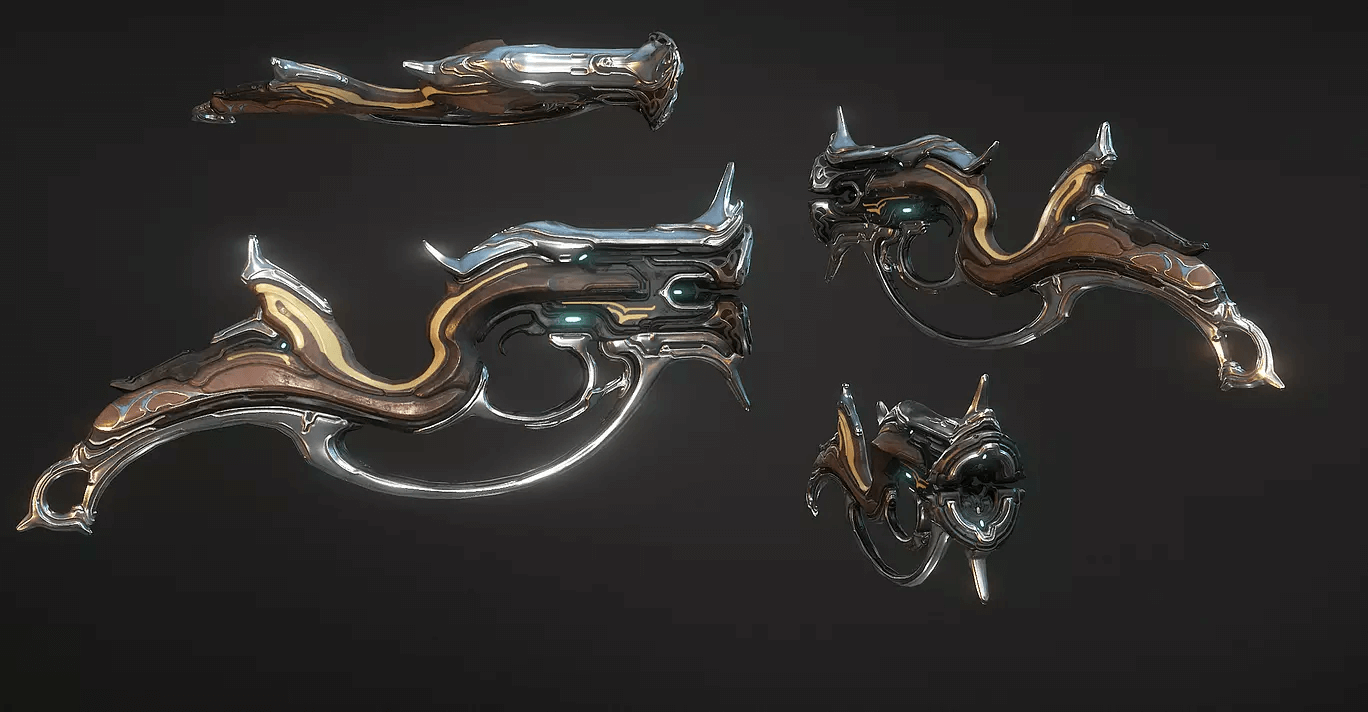 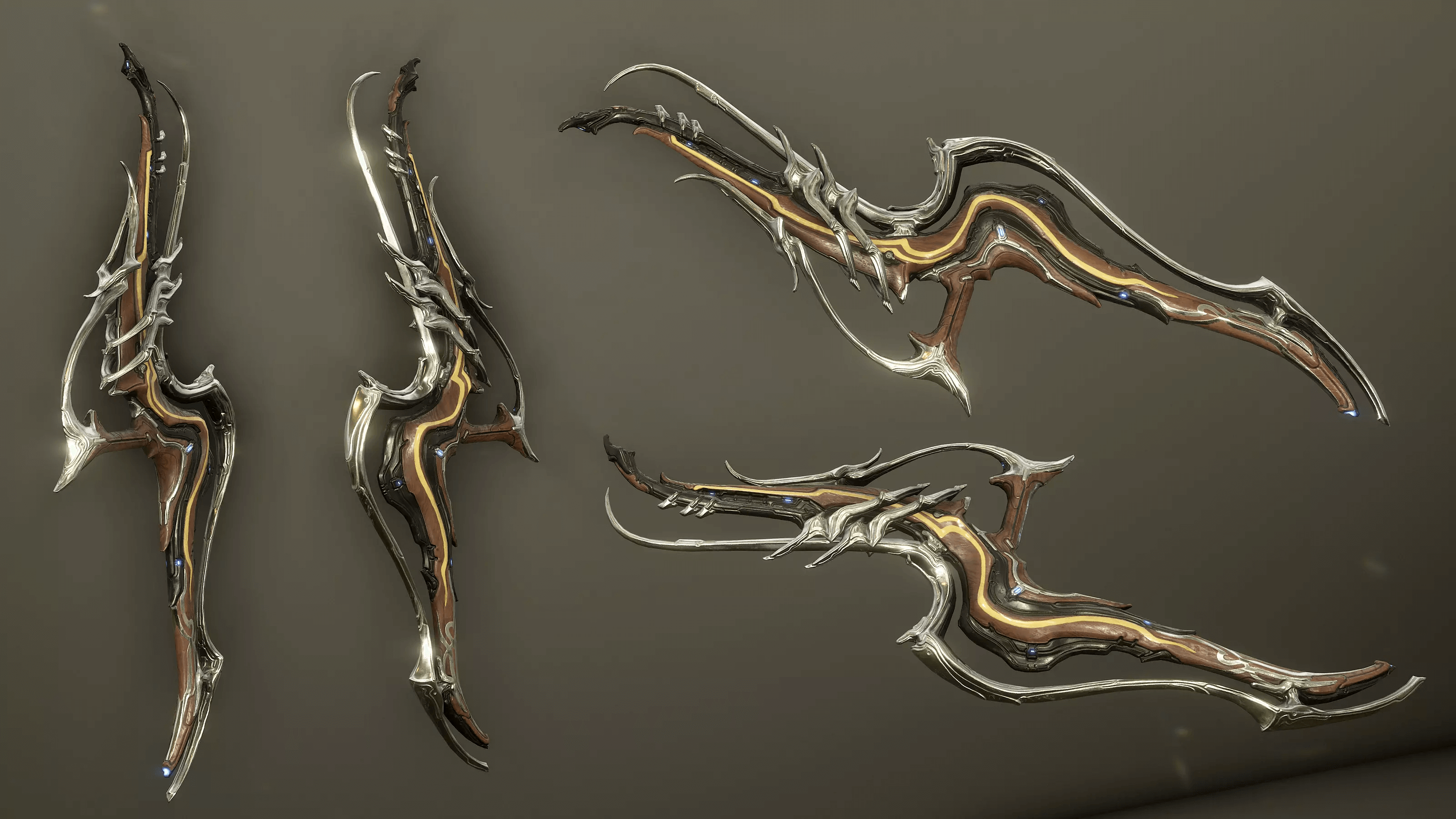 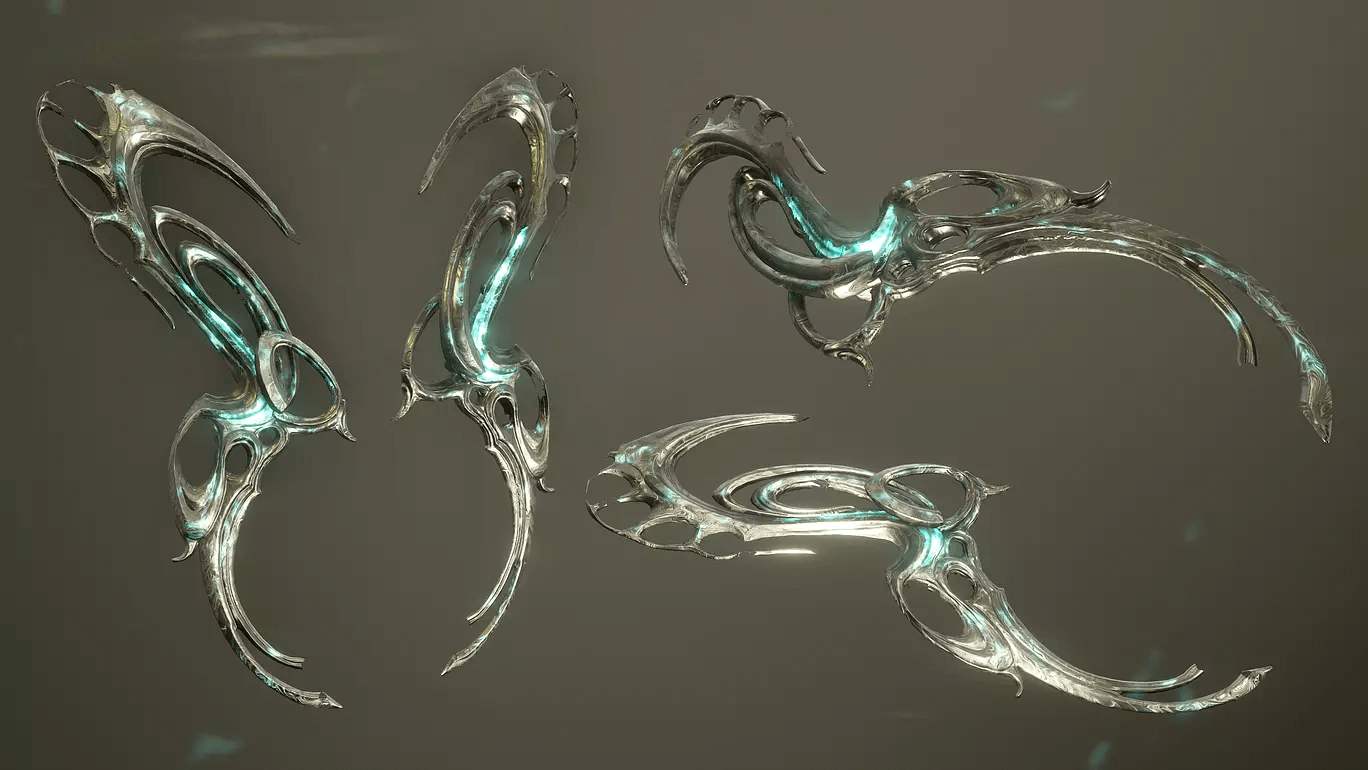 The Hespar is the first Heavy Scythe that Tenno will be able to get their (two) hands on! This new melee grip is coming with the Galeforce Dawn stance. You can see it in action below:

We want Eximus to have an impact in your missions, while we also changing many Eximus abilities to have clear counter/avoidance strategies to reward skilled players. Devstream 160 has a great overview of this rework, which you can read about here.

In today’s stream, the team showed off a new overhealth mechanic aka “Protection” that makes Eximus a tankier threat. Protection will temporarily keep them immune to Warframe crowd control abilities and anything that will stagger, knockdown, stun, mind control, ragdoll and blind. Additionally, while Protection is active, Eximus will be unaffected by Radiation Status Effects and susceptible to a max of 4 Cold Status Effects at one time. This will encourage you to engage with them more interactively as opposed to easily overpowering them with abilities alone. It should shift the focus of fighting Eximus to using a mixture of using weapons and teamwork, and make Eximus units feel like more of a true threat.

This is a flat value that represents a portion of their overall Health/Shields, not an additive amount! Protection is indicated with a bar overtop of their existing Health/Shields. With the same goal of making enemies more consistent in terms of difficulty, Protection will be the same amount at each level, regardless of enemy type.

You can see it in action here, plus a preview of the reworked Shock Eximus.

Clan-focused Tenno might remember us previewing a Clan Recruitment system back in Devstream 155! We are hoping to officially ship it with Angels of the Zariman.

Here is a quick recap of how this system will work:

Warlords or Clan members with the new role of “Advertiser” will be able to Advertise their clan for a cost -- actual costs shown are placeholder! Clans can write a brief description about their Clan’s interests and also add flags to help prospective members filter the ads. These flags include:

Clanless Tenno can view ads through the Clan Menu and also apply to join those that they are interested in!

In the clip above, you might have noticed a new zoom feature we’re adding to the Arsenal for Warframes. Players will be able to zoom and enhance to get a better look at their Fashion Frame:

Finally, as you may have seen in some of the weapon showcase clips, text description for weapons always stays on the screen when viewing them in the Arsenal!

For Tenno interested in more customization, we took a quick trip back to the Dormizone before Tenno can move in themselves:

We mentioned last Devstream that we’d be asking the community to name the Gardener Bot seen in the Zariman, the Tenno delivered!

Introducing, VERD-IE, the “Vegetation and Environment Regulation Drone - Independent Element”. Thank you to everyone who suggested names, and congratulations to StallordD for having their submission chosen.

If seeing them in the Zariman is not enough, you’ll be able to bring VERD-IE with you via a coming Sentinel Skin:

We mentioned the Valkyr Deluxe Skin designed by Liger Inuzuka was coming with Angels of the Zariman, but now we have full details on the skin name and all of the new cosmetics coming with it!

The Valkyr Carnivex Skin is coming with:

You can see these all in action below:

Nidus’ Maggot will soon be available as a Decoration for your Orbiter.

When we released Nidus Prime Access back on September 8th, 2021 we had originally hoped to include the prime versions of his Infested creepers as an additional ship Decoration.