Sign Up
Devstream 160 Overview
What's to come in March and April 2022!

Devstream 160 has come and gone, featuring reveals and discussions of what’s to come March and April 2022! For a look at what’s on the schedule from next week’s update, to the coming Angels of the Zariman release in April, we’ve compiled all of the highlights below.

There may be some light spoilers for the New War ahead, so tread carefully!

If you want to catch the shenanigans live, you can also watch the full episode here:

- Keep an eye out for the usual Gift of the Lotus Alert for 24 hours following the stream to get your own Riven Cipher!
- Reminder: Nora’s Choice ends on March 13th, so finish up your Acts and redeem your Creds before the next Nightwave series commences.
- Cross-play/Cross-save is being worked on but we have no concrete updates at this time!

In other overviews, we’ve tried to keep the most-hyped content at the top, with more niche reveals/discussions further down. For this one, we’ll work in chronological order -- for Updates that is. Rebecca and the team covered 3 releases coming in March and April, so we’ll work through them in order of when to expect them!

Next week, Tenno on all platforms can expect a release with three major beats:

First, Nightwave! We announced that Nora’s Mix Vol 1. is coming next week, featuring new Acts and new goodies. You can read more about the Acts in our Dev Workshop, and see a preview of the Rewards below:

Augment tweaks are also coming for 15-16 of the lesser-used ones. We discussed these in a previous Devstream, but now they’re confirmed! Pablo stated these were from A-L, so expect us to review M-Z at a later date.

Garuda is also getting some Ability kit tweaks to improve the overall flow and feel of her playstyle. Pablo mentioned that a few of her Abilities are getting invulnerability states while casting, and that her passive is changing.

While previously Garuda would receive a damage buff the lower her health was, this buff is now tied to how many enemies you kill. The more you rip and tear, the more you are rewarded for it. This is reflected in a new UI icon in the bottom-right corner of your screen:

In the clip above, you might have noticed Garuda looking a little shinier (and spiky, if that were even possible) than usual. That’s right -- Garuda’s Prime is officially arriving soon!

In addition to the new Prime Access launch, we are also celebrating 9 Years of Warframe beginning March 28th! If you missed out on the old Dex content, you will see it returning, as well as a new Dex Skin!

Log in during our Anniversary celebrations and get the Wisp Dex Skin for free. More details on the campaign to come at a later date.

Angels of the Zariman - Coming April 2022

In our coming major update in April, we’re taking you straight to the Zariman. With this release, you can expect a new Quest, a new Warframe, new Cosmetics, three new Game Modes, and a new tileset to explore. That’s a lot to cover, so let’s break it down:

If you’ve played the New War Quest, you will be familiar with the Zariman ship. We’re introducing a new Quest in this update, that will give you more access to this ship after you’ve completed it.

On this new tileset, you’ll be able to play new missions and visit a new social hub called the Chrysalith. This is the first social hub of its kind that will let you seamlessly access procedural missions without load screens. There’s so much beauty to explore, but here’s a quick look at the (empty) hub:

While you can’t see them in the footage above, you will be introduced to new Zariman NPCs and a new Zariman Syndicate. Expect a similar system to the Necralisk on Deimos where you will earn standing in exchange for resources you gather!

In this new ship, you may also see a familiar Cephalon face from previous Zariman adventures that will offer you side objectives during your missions, should you wish. Nothing wrong with a little extra credit, Tenno.

Finally, if this doesn’t seem welcoming enough, Tenno will be able to make the Zariman really feel like home with new player apartments that they will be able to decorate as they wish. There is an extra room for those really invested in this system, where you will be able to customize the view through your window (called Vistagraphs).

To keep you company, there is a little gardening drone buddy that we will let the community name. If you’re in the Design Council, head over to our forums and submit your suggestions!

As we mentioned, you’ll be able to transition from the social hub in Zariman to procedural missions seamlessly, which is great -- but you’ll also be able to play new missions after that seamless transition. There are three new missions coming with this update that you will be able to select from the Star Chart or from a Bounty NPC: Void Flood, Void Cascade, and Void Armageddon.

For this Devstream, we showed Void Flood!

Since this gamemode is still a work-in-progress, expect some names and textures to possibly change.

This is a parkour-focused endless mission where players need to collect Void Orbs to gain Void Energy. This energy will be used to repair Void Fractures that appear in-mission. The longer that these Void Fractures are left open, the more debuffs you open yourself to. You can grab these Orbs from fallen enemies, or in clusters that spawn for those parkour-inclined.

Sealing three fractures completes the wave and spawns a miniboss for you to defeat, after which the cycle continues in true endless mission fashion!

Here is a preview of our next Warframe: Gyre!

She will come with electricity-themed abilities -- but will be very different from our current lightning lord Volt. Expect to learn more about her kit in the coming weeks!

For those wanting a deeper look at our coming Eximus and Focus reworks, check out our Preview Dev Workshop! Below, we’ll do a very quick recap of what was touched on, but more details are available in the forum post linked above.

We mentioned Eximus reworks in passing during Devstream 159, but we have some footage to share of both Arson and Energy Leech Eximus. To recap, our goal with this rework is to make Eximus add a level of difficulty to missions while offering players counterplay. The clips below are a great illustration of these new mechanics and the ethos behind them:

We introduced Focus in 2015, and it’s undergone growth and changes in the years since its release. In 2022, we feel incremental changes won’t address systemic refresh needs, and our Angels of the Zariman Update will bring a reworked Focus. Read all about it here.

There’s a lot of customization options in Warframe (Fashion Frame is endgame, after all), but we’re hoping to add even more in this update! We’re introducing Void Shell skins, which will allow you to select textures to apply to each tint on your Warframe, letting you create a truly unique look.

These textures will be a mix of earned and purchased, and we hope to expand on them more in the future!

This tech will only be available on Void Shell Skins for your Warframe (and a Void Shell Suit for your Operator, which you will receive from the Angels of the Zariman Quest) -- it’s not a mechanic we can retroactively apply to existing cosmetics without completely having to redo them all. As a result, we’ll slowly be rolling out more skins in this series in the future so hopefully your favourite Warframe can get that extra personal touch!

In the new Zariman social hub, you’ll meet a character who will offer you Evolving weapons. Similar to the Protovyre cosmetic series, these weapons will evolve based off of challenges you complete in-game. You will unlock various aspects of this weapon that you can pick, and respec as you wish! We only have concept art and rough UI mock-ups available, but here is a preview of what to expect:

The current slated list of weapons are: dagger, pistol, shotgun, rifle, and tonfa! The weapons shown in the UI concepts in the clip above are not the final weapons, to be clear. Here are concepts of them below: 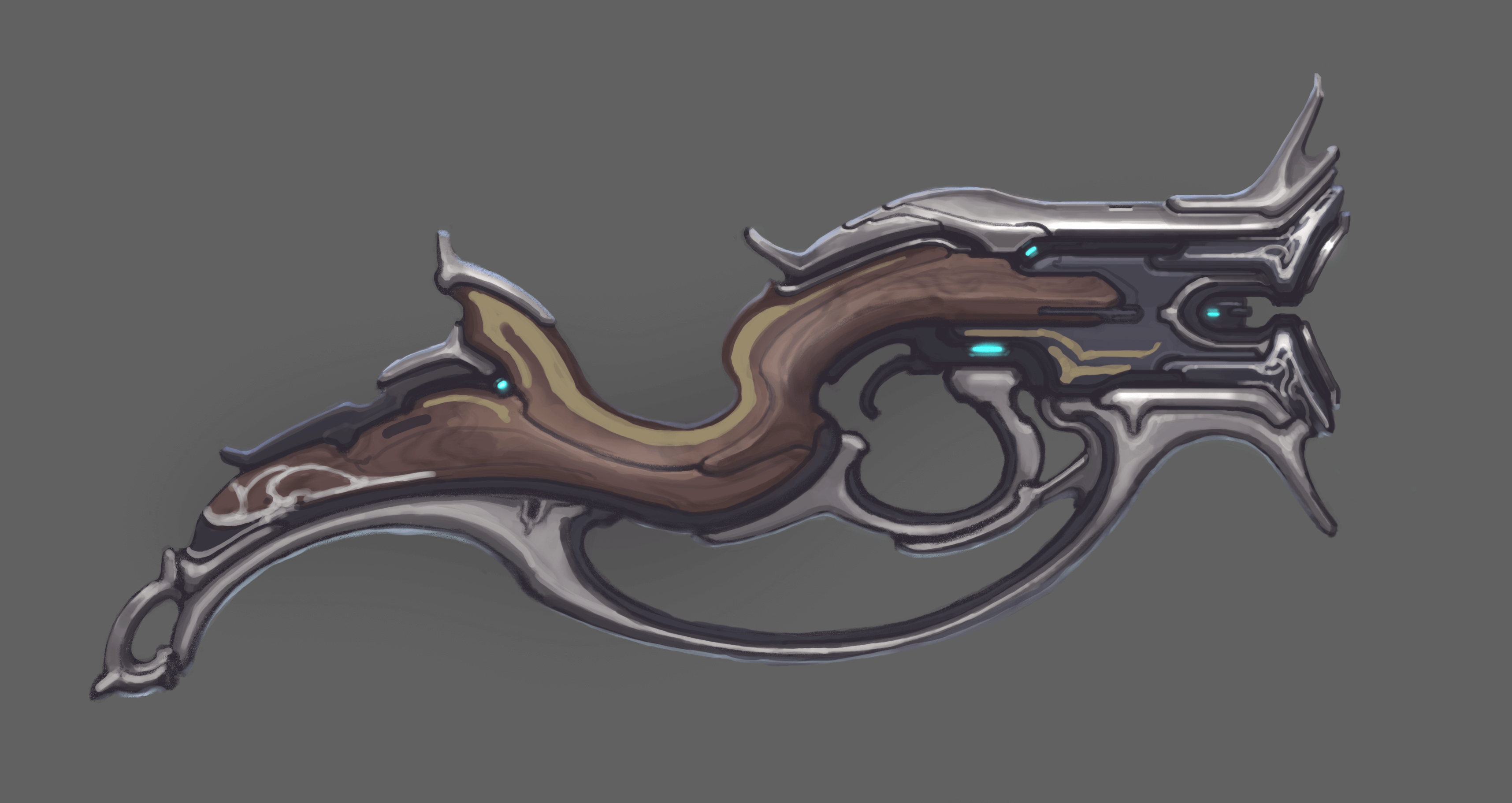 
And a weapon you can use these on in the future:

Expect the previously showcased Valkyr Deluxe Skin in this update!