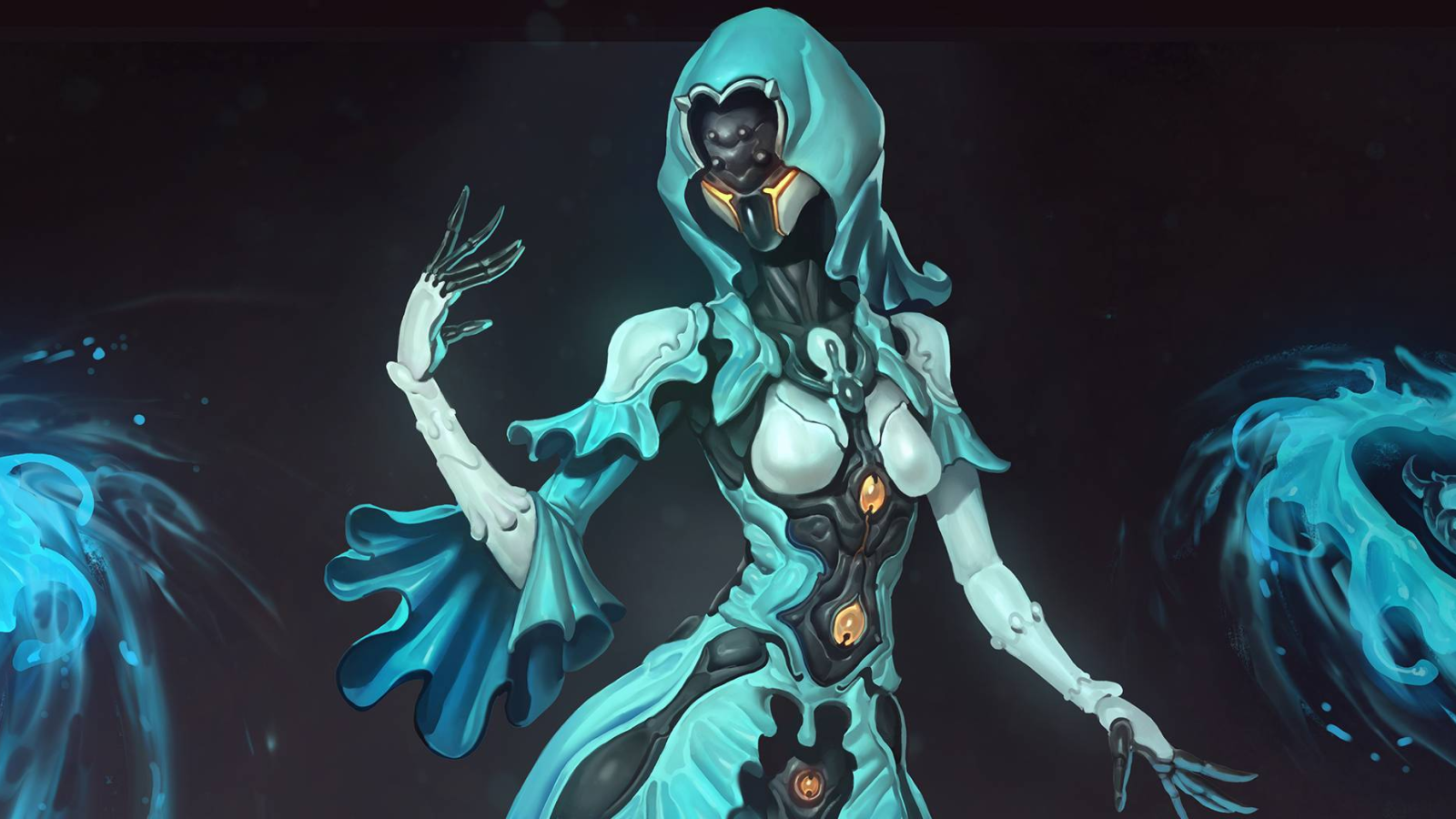 If you want to catch all the details, check out our full livestream, or read about the highlights in our overview below:

- Our Fan Merchandise Policy is now available, for those looking to sell some of their own unique Warframe creations.
- Gift of the Lotus Alerts are live for 72 hours following the stream. Don’t miss your chance for a Sevagoth In Action Glyph, and an Orokin Catalyst Blueprint!
- Congratulations to /r/Warframe on hitting 500k members!
- TennoCon 2021 is happening on July 17! Here’s a look at some of the merch that will be coming:

You can see more images of upcoming merch here: https://imgur.com/a/ft86QzT 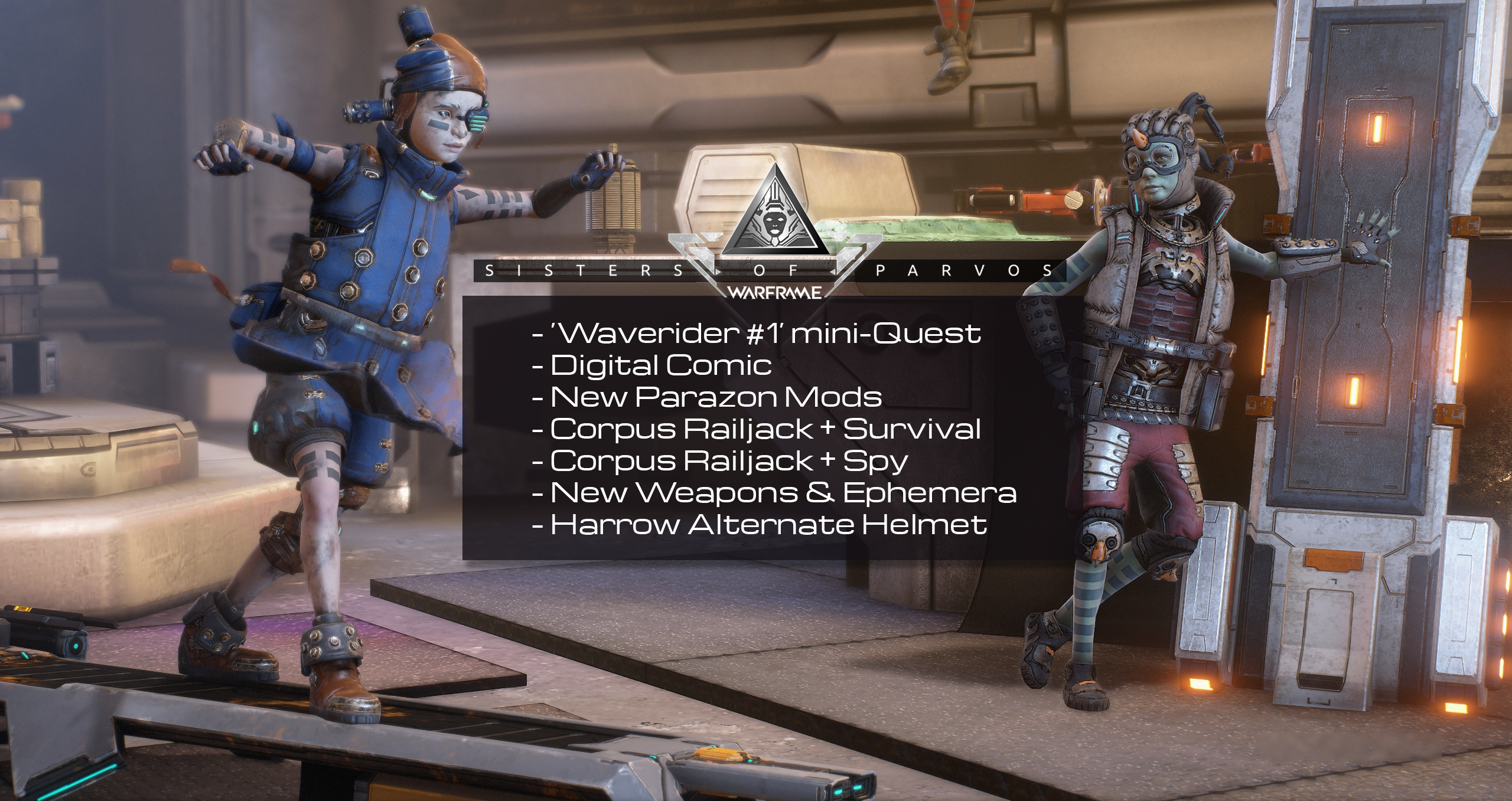 This update will be released simultaneously on all platforms! You can check our our “In Dev” thread for our console Tenno below: https://forums.warframe.com/topic/1266029-console-update-sisters-of-parvos-status-in-dev/

The Patron saint of Vent Kids! This Warframe will be coming with her own mini-quest and comic. We commissioned the amazing ChickenDrawsDogs to draw the comic cover: 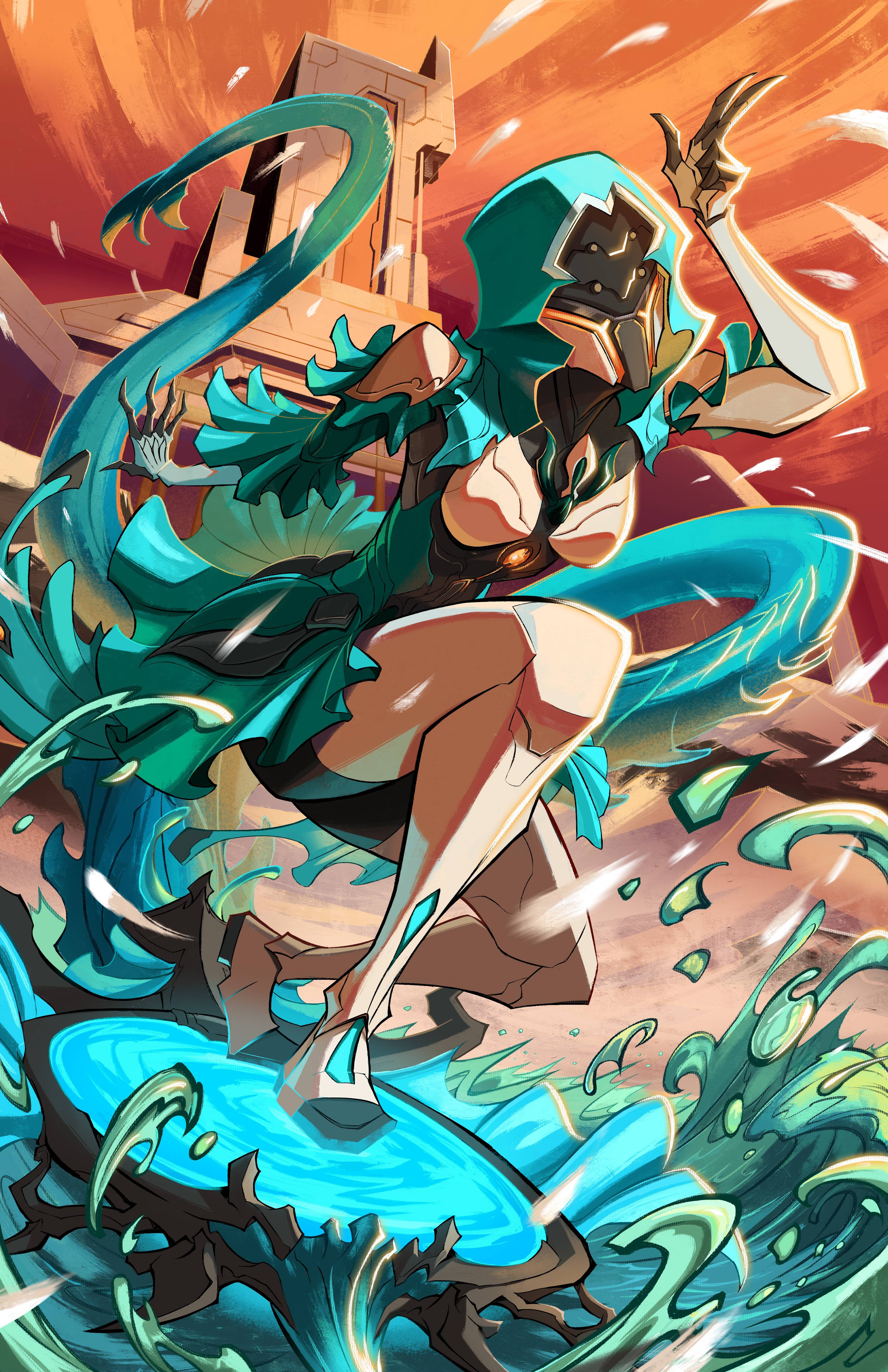 Passive: While moving, your secondary weapon does more critical.

Ability One - Sea Snares: Send out globules of water that ensnare enemies, CCing them and dealing damage over time.

Ability Two - Merulina: A health-based k-drive that Yareli can drive around on in-mission. Redirect some of the damage you take to Merulina while on board!

Ability Three - Aquablades: Casts a swirl of blades around you that damages any enemy foolish enough to walk within it.

Ability Four - Cyclone Strike: Gather enemies in a fast-casting AOE and launch them into the air.

Yareli is also coming with her own signature weapon, lovingly nicknamed the “bubble gun”: 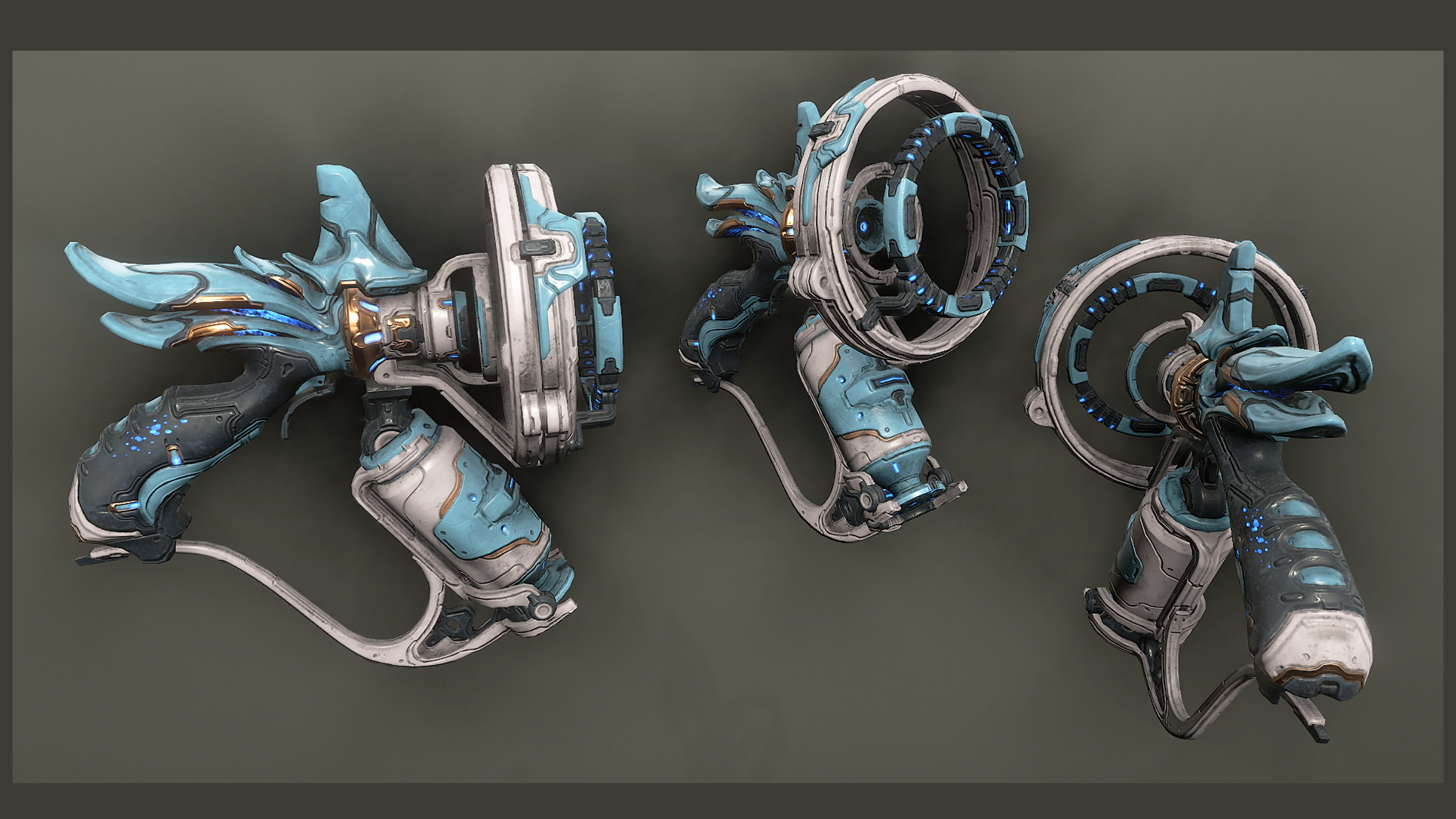 If you want to see some behind-the-scenes images of how this final weapon was developed, you can see the work-in-progress images here: https://imgur.com/a/X9XY5sY

Finally, here are some previews of her amazing idle animations!

Previously known as “Corpus Liches”, the Sisters of Parvos are the next progenitor-based foes to come to Warframe!

You will be able to generate your very own Sister of Parvos by donating a Zenith Crown to Granum Void. Once you’ve completed the mini-mission in-game, a Sister candidate will appear, similar to a Kuva Larvling. Upon vanquishing them, your new foe will await you upon return to your Orbiter!

While Kuva Thralls contribute to your progress against Kuva Liches, a more dogged enemy awaits you in your quest to identify your Requiems: the Sisters’ Hounds themselves. These enemies are tougher, but offer more Murmur progress overall.

When your Sister has had enough and is ready to fight, she will flee to a specific node in the Railjack Star Chart (Neptune for Sisters, Saturn for Liches), where you can start the showdown. Other Tenno looking to fight their own Sister of Parvos will matchmake to the same node, where you can work side-by-side to take down your unique foes one-by-one!

We mentioned the new style of ‘briefcase’ weapons that are coming with the Sisters, but there will also be new “Sisters” variants of existing weapons you can expect from this new system:
- Arca Plasmor
- Flux Rifle
- Tetra
- Cycron

New Ephemeras:
Like with Liches, any Sisters you generate can come with an Ephemera. We’ve shown off some of these in the past, but here is a look at 2 new versions that will also be coming:

Here’s an example of an Ephemera on a generated Sister:

Rank 10 of the Command Intrinsic will unlock Elite Crew Members available for hire from Ticker. These Crew come with unique traits based off of their highest Crew stat.

For example, a highly proficient Gunner may offer 50% bonus damage for Lavan weapons; a Crew mate with a high Endurance stat might have the perk of healing all nearby allies for 500 health after killing an enemy! 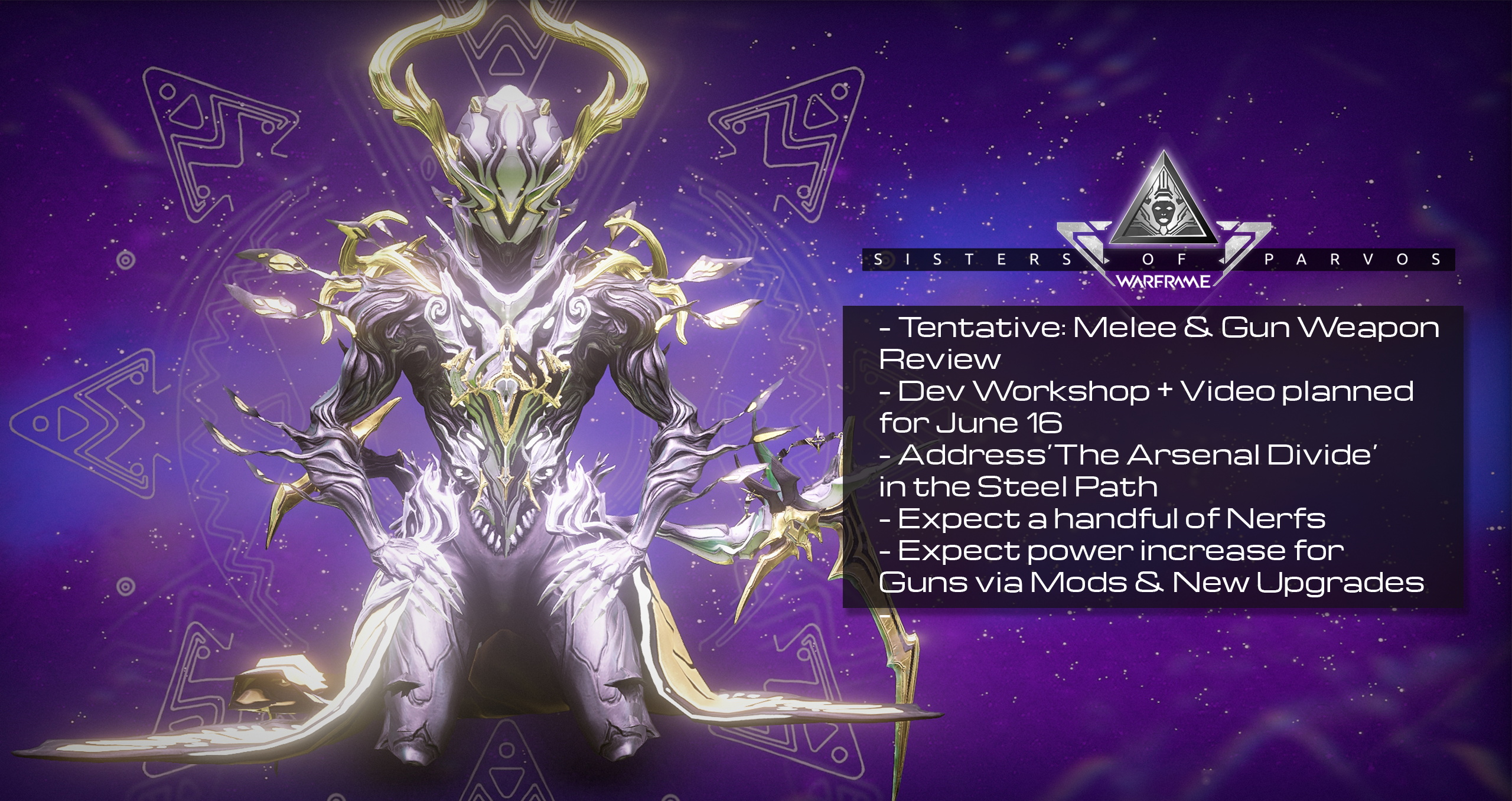 We have made mention of this in the past, but for those who missed it: the discrepancy of power between melee weapons and primary/secondaries is an issue we are hoping to address. Our philosophy has been to tackle this with the goal of increasing the power of Guns via Mods and new Upgrades -- but there may be a handful of nerfs along the way as well.

Expect full details in a Dev Workshop and a Video currently planned for June 16. 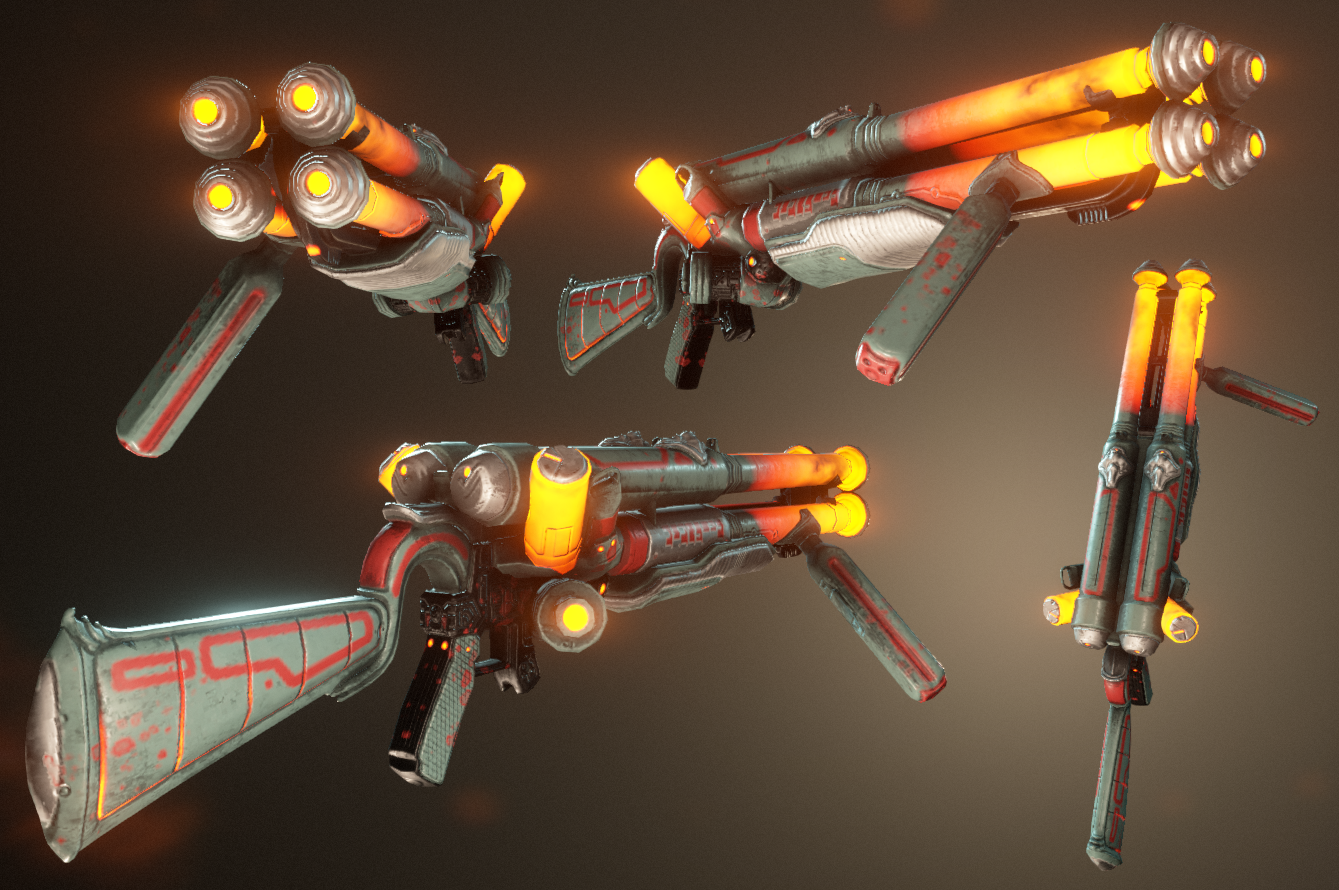 Briefcase Melee Weapons
You will be able to acquire the new ‘Briefcase’ Melee Weapons via Ergo Glast in the relays! Here’s a sneak peek at these new offerings: 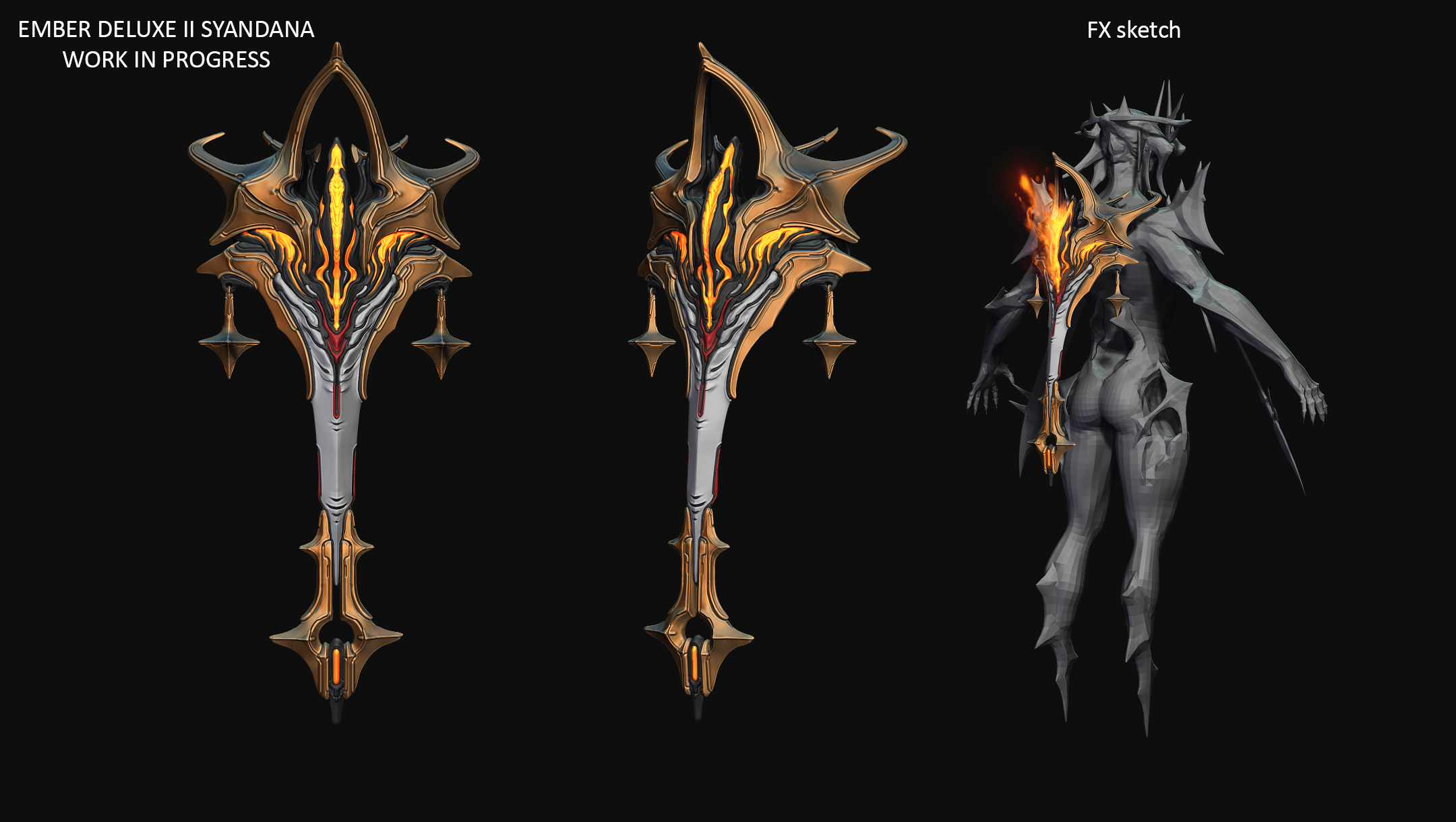 Maroo has a new business venture for our friendly Tenno. In exchange for some of your resources, she’ll spread the word about your Clan to others within the Solar System. This new system is to offer a dedicated space for Clan recruiting in addition to Recruiting chat.

You will be able to offer a custom “advertisement” that highlights the strengths of your Clan, as well as what kind of players you’re interested in recruiting. Tenno who are looking to join a Clan will be able to search through these listings to find a place to call home. These listings will be of a limited number due to database limitations, but all numbers and values in the screenshots below are still placeholder! 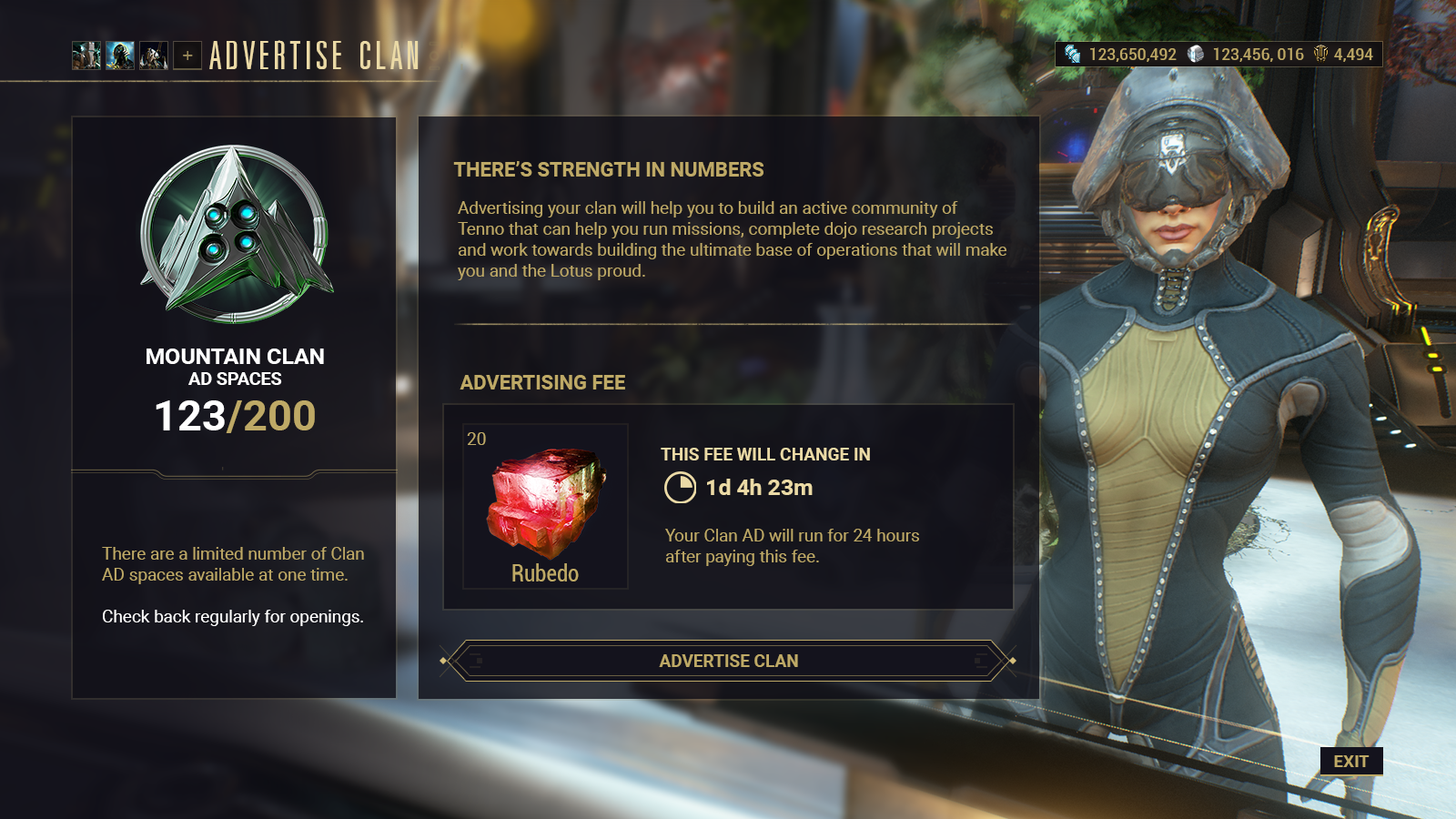 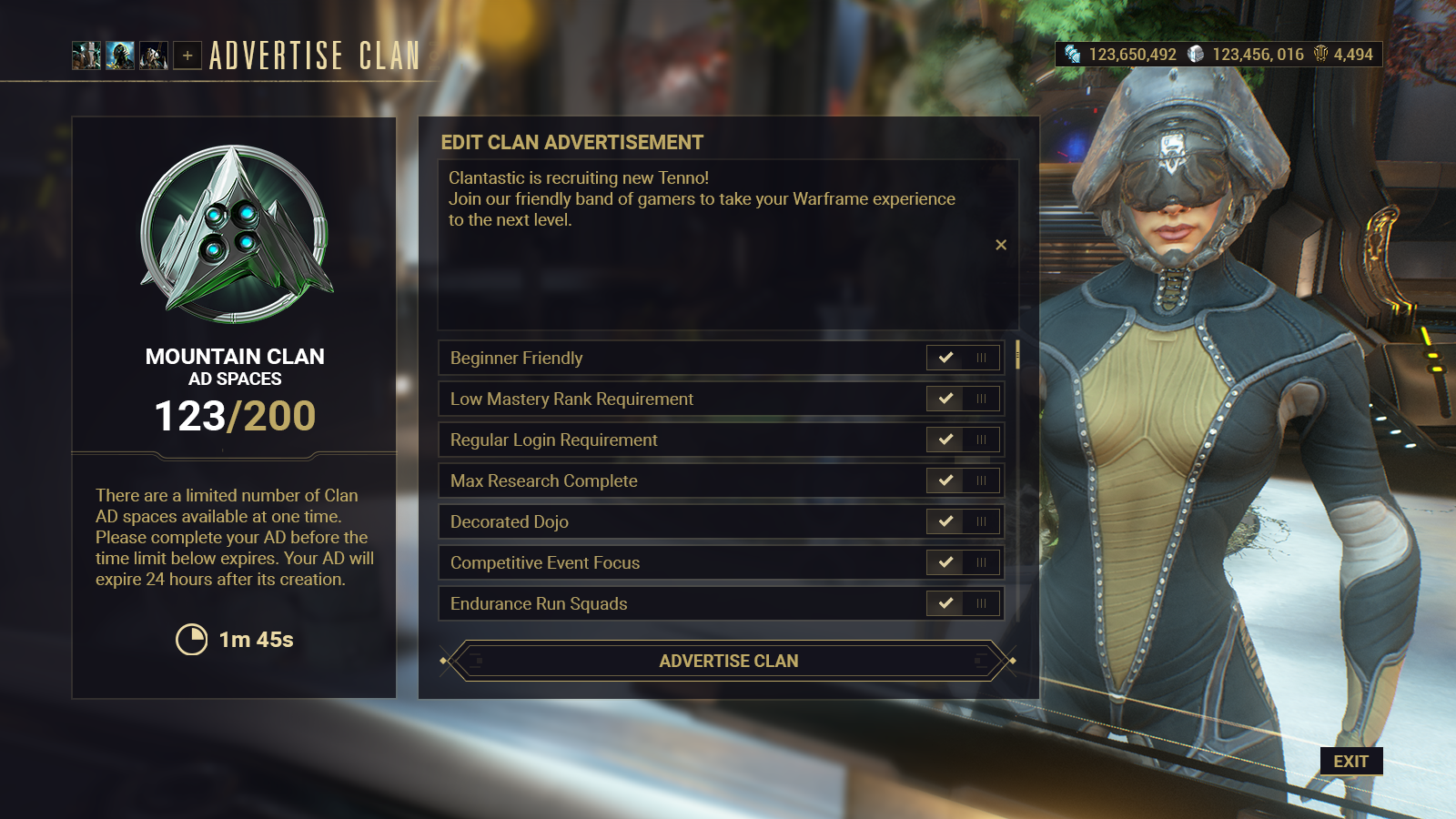 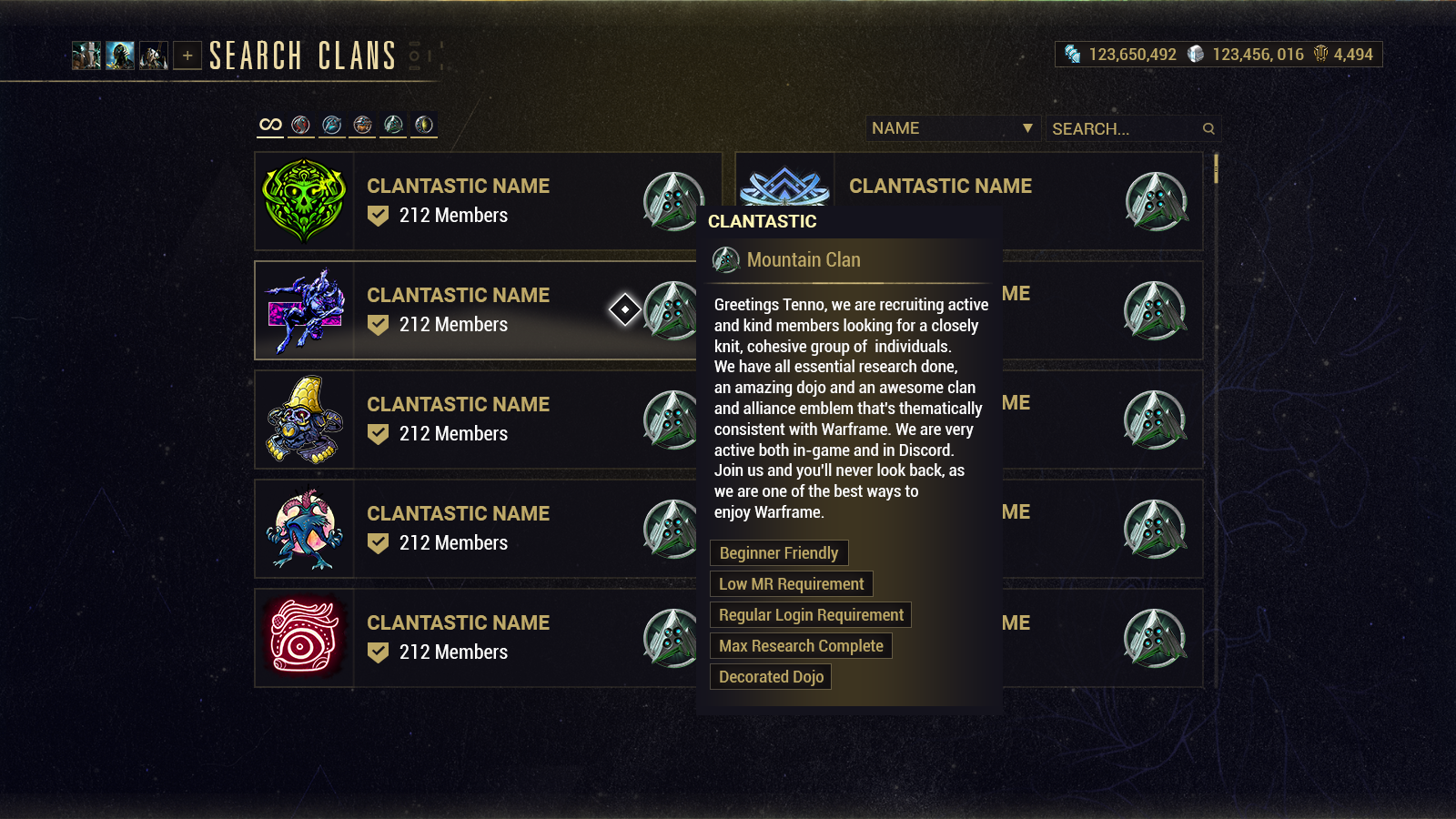 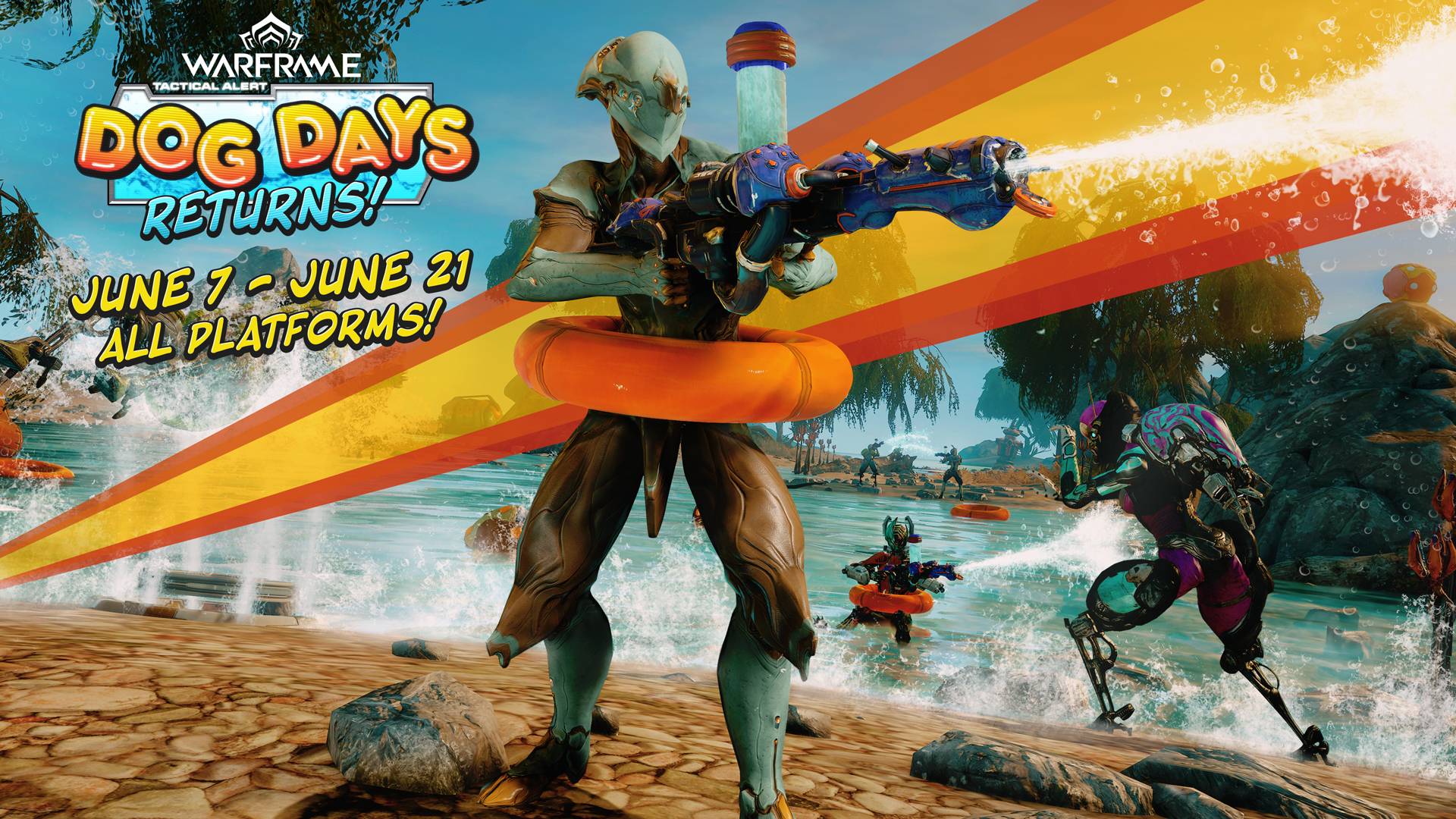 Dog Days is returning from June 7 to June 21 on all Platforms! We are adding the much-requested Soaktron Skin so you can soak your foes year-round!

- Modular Archwing is still being worked on, just not for Sisters of Parvos. Currently, the Gun vs Melee balancing is our priority.
- Rebecca used her alt account to ask about Warframe houses, to a non-committal response!
- Other faction ships in Railjack would be fun, but perhaps simply hijacking Corpus or Grineer crewships in a more significant way may be a better option to add more ship variety to Railjack. We have other “unpaid debts” to address before we look into this further.
- We’re looking at a lighter weight refresh to Nightwave, but we have other priorities at this time. The narrative asks for Nightwave are being revisited in favour of using that work in quests or other places instead.