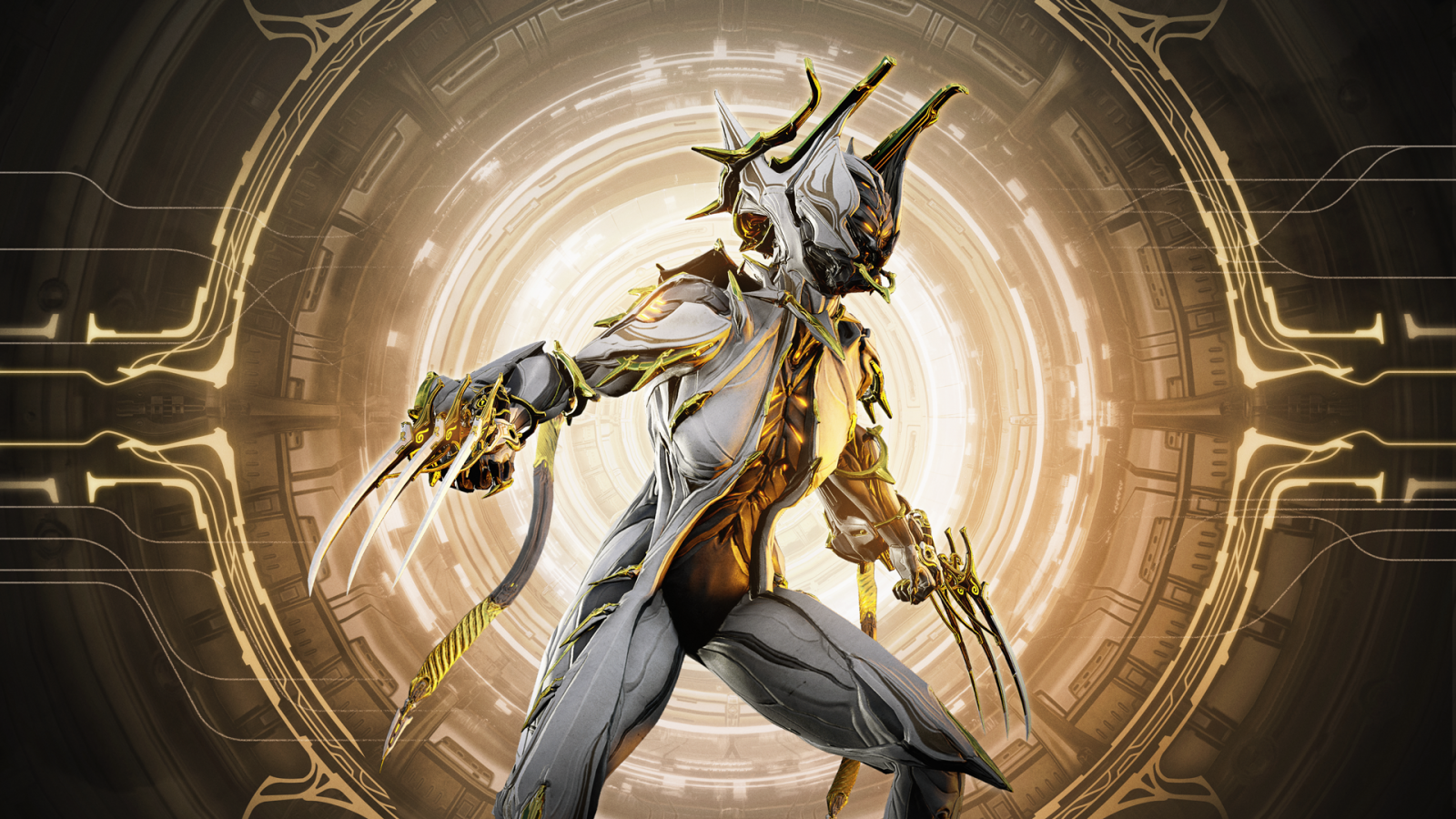 Cry havoc and sharpen those claws, Tenno! The anguished screams of Valkyr Prime are once again ringing out in the Origin System thanks to her reappearance in the current Prime Resurgence rotation. Earn or instantly unlock her (along with her Prime Weapons and Accessories) to take advantage of her savage ferocity!

While Valkyr Prime has a well-earned reputation for being a berserker on the battlefield, a number of niche builds also offer more flexibility depending on the kind of Mission you’re using her for. Take a look at some of our favorite guides for tips on how to maximize Valkyr’s iconic Talons, while also deploying some unique Mod choices for more versatile options.

L1fewater’s Valkyr is one such example of a niche build. In this case, his version of the tormented Warframe is engineered for taking out “high-priority targets, such as Acolytes and Demolysts.” This is achieved by replacing Rip Line with Octavia’s Resonator, which will group up common enemies and render them easier to destroy, allowing you to focus your efforts on the more difficult foes. Resonator gives Valkyr some much needed crowd control, as her Warcry Ability only slows enemies, and Paralysis simply knocks them down.

The Mods for this build are focused largely on Valkyr’s Hysteria, which activates her deadly, Exalted Talons. L1fewater notes that because her Talons can exact triple damage during slide attacks and also possess additional Critical Chance, a single slide attack can deal millions of damage in red crits.

You’ll want to focus primarily on Strength and Duration here. Strength will increase the already-high damage output from Valkyr’s Talons, as well as amping up Warcry’s attack speed buff, armor buff, and the ‘slow’ that it applies to enemies. Duration is important because both Resonator and Warcry are time-based, and you’re going to want to have them active for as long as possible during battle.

Duration is also important when it comes to the Hysteria-focused Augment Mod, Enraged. This Mod increases Damage and Critical Chance by an astonishing 200%, while capping the Ability’s Duration at 15 seconds and adding a matching cooldown (although this cooldown is adjusted based on other Duration Mods you might have applied, and you can also disable the Ability midway through to avoid the full cooldown if you prefer).

Enraged is the key to effortlessly taking out deadly foes like Demolysts. Remember, the 200% damage increase from the Augment is being applied to an Exalted Weapon that is already quite powerful, so you should be able to easily take out Demolysts within seconds before their Nullifier fields pulse and disable your Hysteria. After that, you simply wait a few seconds for the cooldown, then rinse and repeat as necessary.

For the Talons themselves, L1fewater suggests Modding for Viral and adding Condition Overload for even more damage. Slap on Sacrificial Steel for Crit Chance, Primed Reach for Range, Gladiator Might for Critical Damage, and Gladiator Vice for Attack Speed.

And that’s basically it! Throw out your Resonator (or “ball of yarn”) to control the majority of the room, and then focus your hyper destructive Talons on more dangerous, high-priority targets.

As the title of this video suggests, Brozime’s Valkyr build is also relatively niche as it’s optimized specifically for the Void Cascade gamemode. Full disclaimer: this is a demanding build in terms of maxed-out Mods and Forma, and while some of the Mods can be cut in the name of affordability, others cannot.

Starting with Weapons, Brozime prefers using the Laetum Incarnon Pistol with the Secondary Dexterity Arcane added to it, as this will add to Valkyr's combo count and keep up the damage she can deal with her Talons. You could also add Primary Dexterity to a Primary Weapon, but Brozime prefers to stick to Secondary Weapons only with Valkyr, as it’s easy to accidentally switch to guns while using her Hysteria, which can deprive you of its benefits at an inconvenient moment.

The Praedos is your recommended Melee Weapon for this build, equipped with Gladiator Rush, Gladiator Might, and Gladiator Vice. In terms of its evolution path, it’s really only the second and fourth evolution choices here that will make a difference. Be sure to opt for extra Sprint Speed and Slide for choice #2, and extra Parkour Velocity for choice #4.

Crucially, Brozime replaces Valkyr’s Rip Line with Ash’s Shuriken, which is then enhanced by the equally crucial Augment Mod, Seeking Shuriken (which allows you to completely strip away enemy Armor). Beyond this, you’ll be focusing on Strength with Mods such as Power Drift, Energy Conversion (in conjunction with the Madurai Focus School) and Transient Fortitude. But Efficiency is also incredibly important, and you’ll want to Mod Valkyr so that she expends no more than 3.75 Energy per second while using Hysteria to make this build viable. To this end, you might also consider Primed Flow and Arcane Energize on Valkyr, and/or a maxed-out Emergence Dissipate on your Operator. This latter Arcane is ideal for Void Cascade, as you can dash into clusters of enemies to generate additional Energy and keep yourself going. Rounding out this build are Narrow Minded for added Duration (which helps if you plan on using Warcry at all), and Arcane Fury which grants you additional Damage.

Building out Valkyr’s Talons for this build is an expensive endeavor, as it includes four Forma to accommodate no fewer than five maxed-out Primed (and Sacrificial) Mods. While Brozime stands by his choices, he also points out some potential cost-savings: you can use the regular Pressure Point and Fever Strike Mods instead of their Primed versions, if you choose, and Quickening is a decent substitute for Primed Fury (these adjustments alone can save you about 120,000 Endo and some Forma). Primed Reach, however, is non-negotiable, as Valkyr benefits greatly from the additional Range.

Based on the numbers alone, Brozime calculates that you’re best off activating Hysteria, and then focusing on slide and jump attacks only so as to maximize its Damage multipliers. If you play on PC, it might be worth binding both the crouch and Melee attack actions to a single key so you can execute slide attacks more quickly (and spare the muscles in your hand). With this setup, the Void Cascade gamemode should be a walk in the park.

Grind Hard Squad: NOW IS THE BEST TIME TO BE A VALKYR MAIN

Although GrindHardSquad (GHS) contends that Valkyr is currently one of the strongest Warframes in the game, this build is specifically useful for Steel Path Survival Missions (especially when you’re farming Relics and Steel Essence at the same time).

As with the other builds we’ve examined above, GHS identifies Hysteria as Valkyr’s strongest Ability, and the focal point of their build. Her Talons can take out her strongest enemies, while also allowing her to avoid Damage and Status (especially from Eximus units). She can also keep it active indefinitely, as it’s possible to get additional Energy by using the Emergence Dissipate Arcane (as Brozime does).

Armor stripping is also important to this build. Unlike Brozime – who opts for Ash’s Shuriken Ability – GHS recommends using the Unairu Focus School Abilities Caustic Strike (to deplete Armor) and Magnetic Flare (to deplete Shields). The idea here is to cast both of these Abilities against tougher enemies, and then use slide attacks with Hysteria active to eliminate them. This method is effective even against Acolytes, allowing you to one-shot them once you’ve removed their defenses.
GHS opts for Mirage’s Eclipse in lieu of Rip Line, and suggests adding Umbral Mods to your Talons to increase Damage output even further. For the Warframe itself, Arcane Strike is recommended for extra Melee Attack Speed, Gladiator Resolve for added Crit Chance, and both Primed Continuity and Narrow Minded to lower Hysteria’s Energy consumption. If red Crits are your priority, then you should also equip a Melee Weapon replete with the same Gladiator Mods Brozime recommends for his Praedos, so you can maximize your Crit Chance before ripping enemies apart with your claws.

As the videos above demonstrate, Valkyr is more versatile than her berserker reputation would suggest. Hysteria is undeniably her strongest Ability, but you can use the tormented Warframe as more than a simple shock trooper. A careful selection of Mods can allow you to dominate the Void Cascade gamemode, target specific high-level enemies during Missions, or rip and tear your way through Steel Path Survival.