Sign Up
Saint of Altra
AVAILABLE NOW ON ALL PLATFORMS 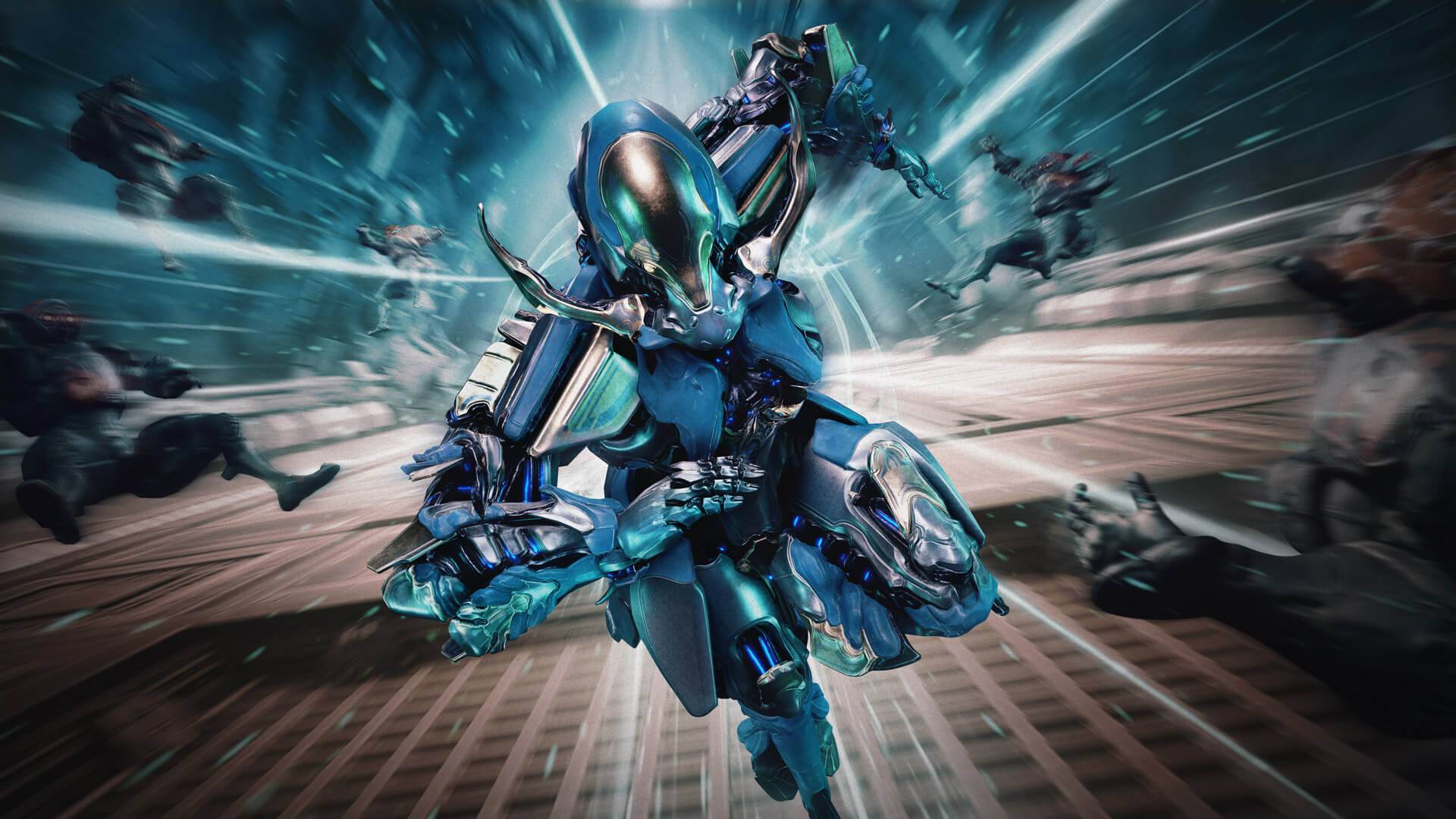 Gauss shifts his kinetic Abilities into overdrive along with a convoy of new gameplay, customizations and rewards! Face some of the toughest enemies in the Origin System with six new Disruption Mode missions, let the Void consume you with the Harrow Reliquary Collection, show off your shredding skills with a playable Shawzin and more!

SPRINT INTO ACTION AS GAUSS 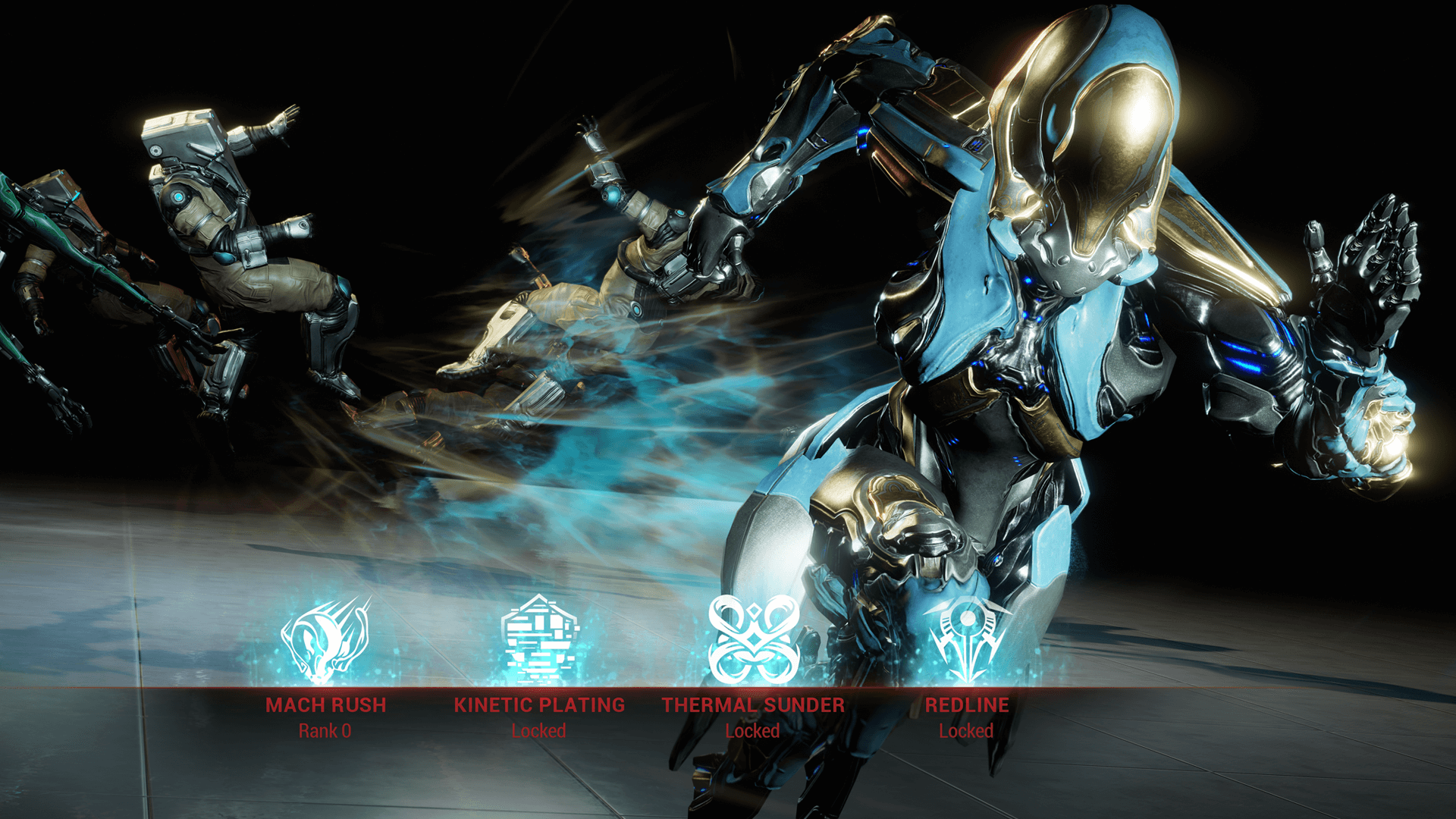 PASSIVE
Never stop moving. Keeping Gauss in motion generates an electrical current that charges his Speed Gauge, helping Shields recharge up to 80% faster, and decreasing recharge delay up to 80%.

MACH RUSH
Burst into a hyper-sprint to bowl over enemies and charge the battery, or crash into solid objects to generate a powerful shockwave. Hold to rush continuously.

KINETIC PLATING
Generate armor plating that converts a portion of absorbed Kinetic Damage into Energy, and protects Gauss from being staggered or knocked down. Damage Resistance is relative to battery level.

REDLINE
Push Gauss’ battery beyond the redline, supercharging his Abilities and setting Fire Rate, Attack Speed, Reload Speed, and Holster Rate into overdrive. When past the redline, bolts of arcing electricity dance periodically from Gauss, exploding en masse when the ability is deactivated.

Alad V, ever the enterprising businessman, has sold his tech to anyone with Credits to spare. As a result, Disruption Missions are popping up all over the Origin System bringing new rewards for willing Tenno like valuable Kuva from the new Kuva Fortress Disruption Node. 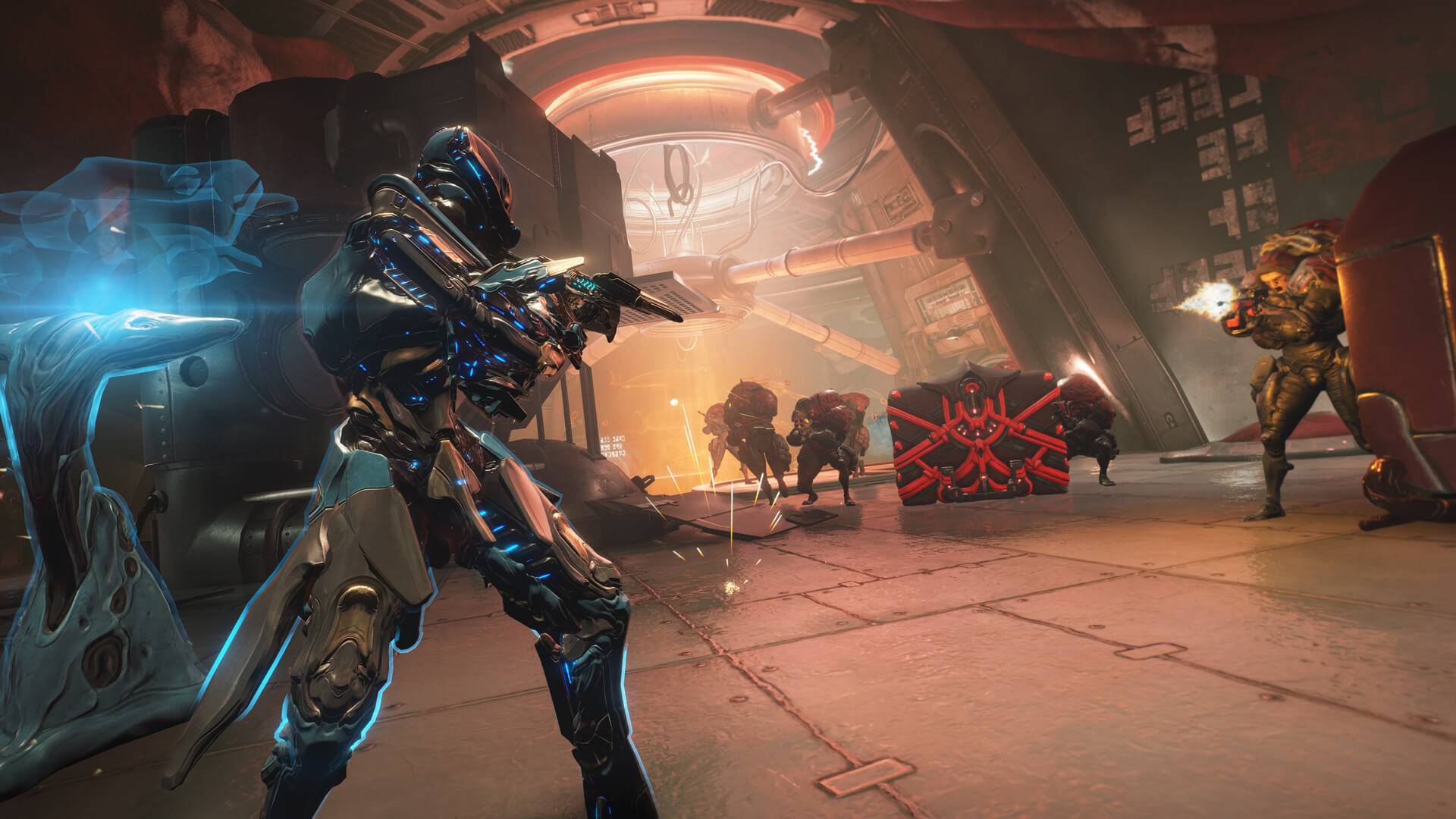 New Challenges
• Grineer Enemies join the fray with a twist! Vay Hek’s grotesque collection of Ghouls take the place of Alad V’s Amalgams. Hold them off as they try to wrestle back control of the Terminals scattered around the mission.

New Rewards
• Earn Kuva in Kuva Fortress Disruption Missions or uncover the new Universal Syndicate Medallion, found in all Disruption nodes (except Mars) to gain 1,000 Standing with any of the core 6 Syndicates

Note: The Sacrifice Quest must be completed to unlock Disruption Mission Nodes for the Kuva Fortress and Lua.

Feel the need for speed with these brand-new Weapons and Customizations.

ACCELTRA
Using a barrage of rapid-fire plasma rockets, Gauss’ signature weapon lays down a path of destruction. Reloads are faster while sprinting, even more so in Gauss’ hands. For safety, rockets arm after traveling safe distance. 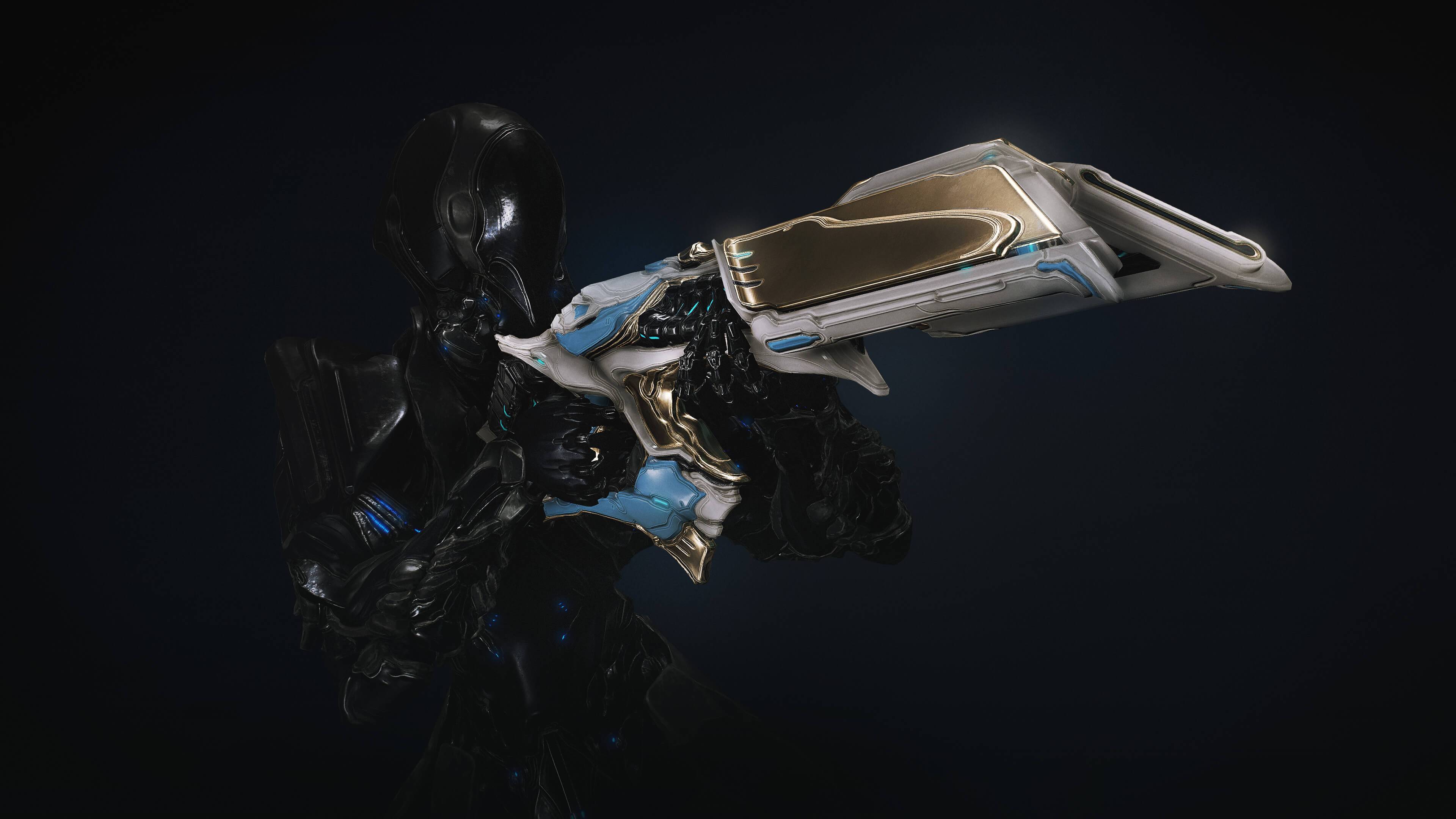 AKARIUS
Bombard legions of enemies with target seeking rockets. These dual launchers reload faster while sprinting, even more so in Gauss’ hands. Rockets arm after reaching a safe distance. 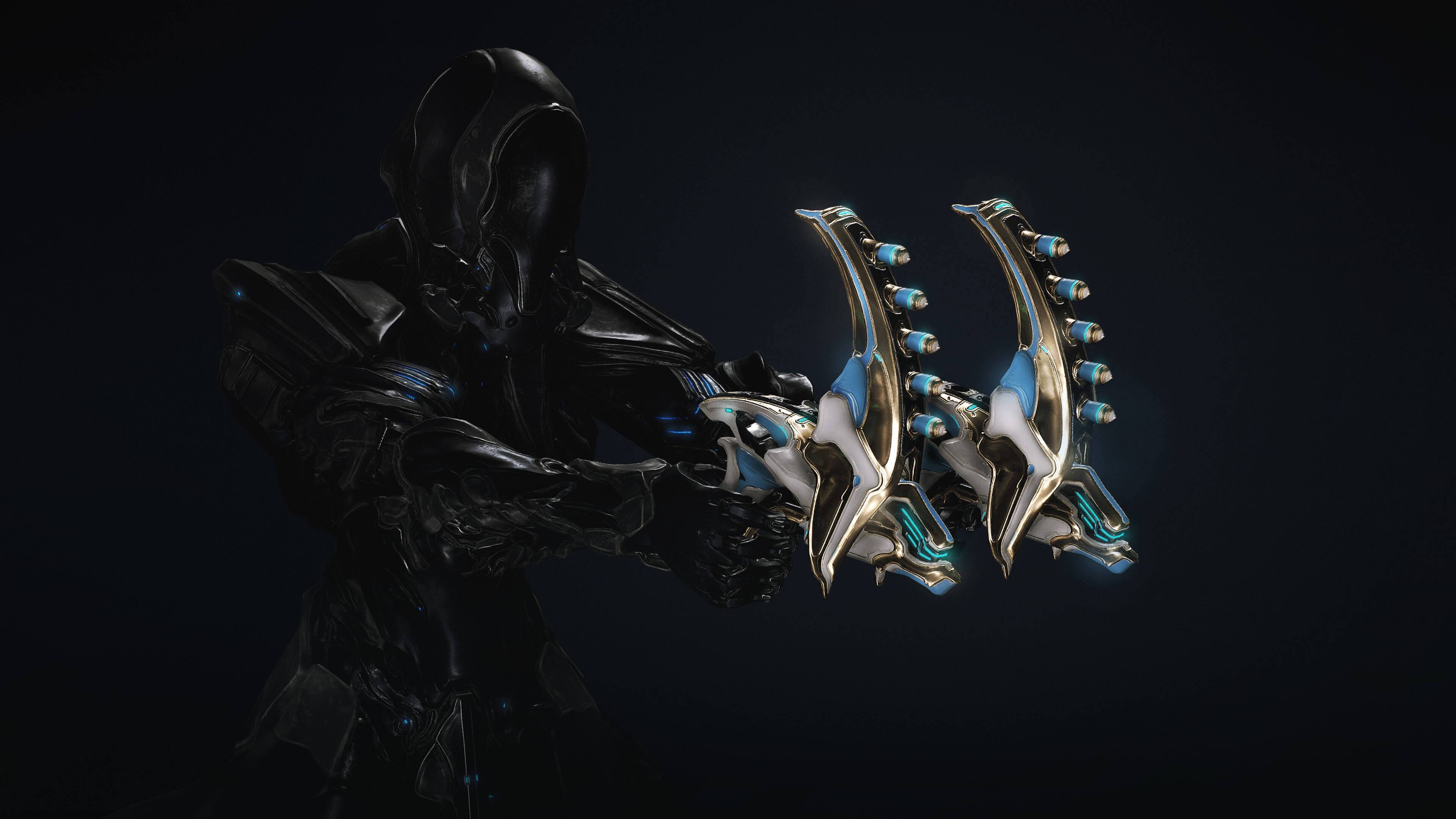 ALTRA SYANDANA
Sleek and streamlined, Gauss' signature Syandana is sure to turn heads as you speed by! 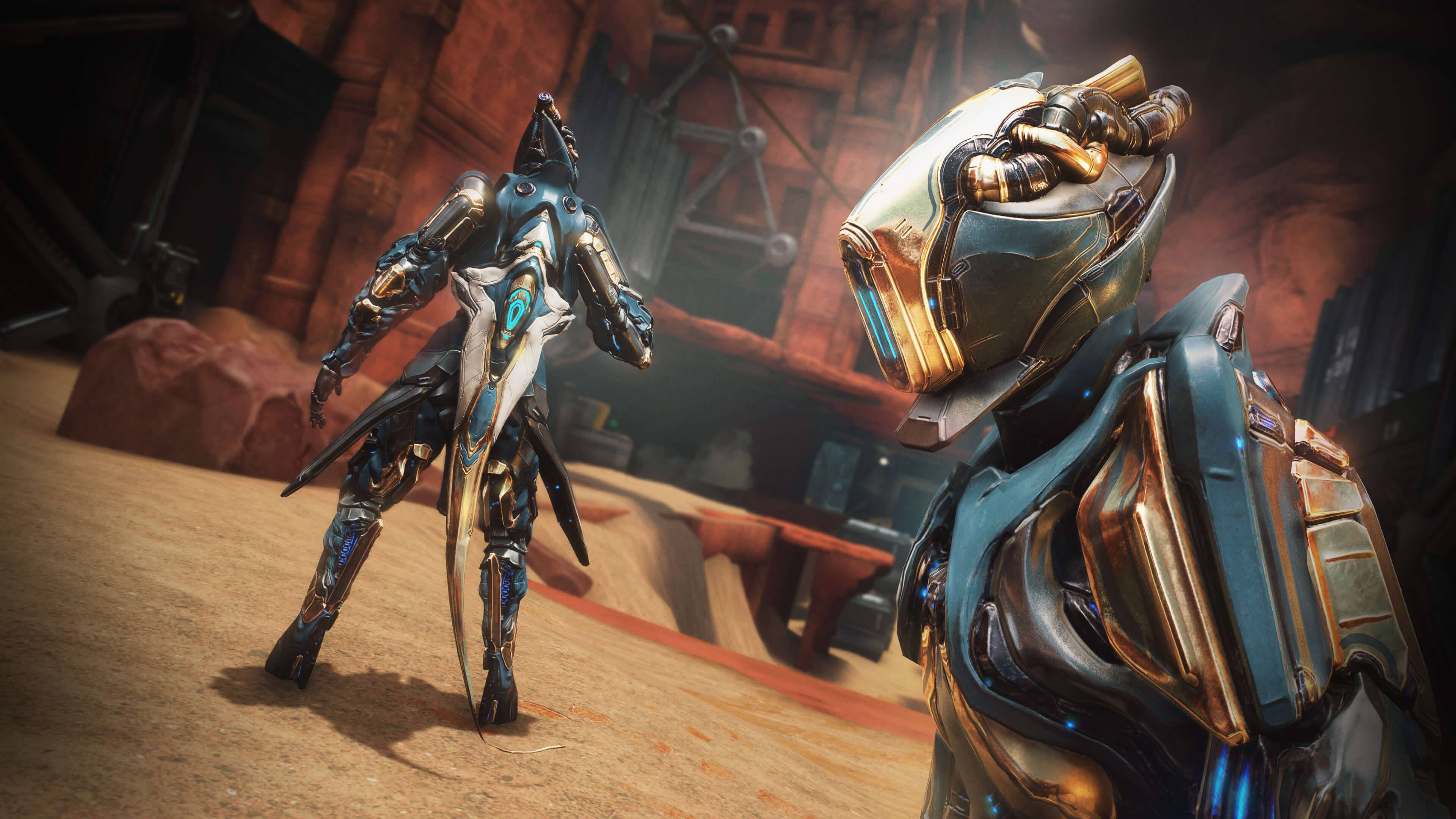 Bound by void and will, Harrow's twilight heart pulses within the sacred casket of a body reinvented. Wield malicious spirits and arcane power with the Harrow Reliquary Collection, and renounce heresy with the Etheria Armor Set and Renuntio Spear! 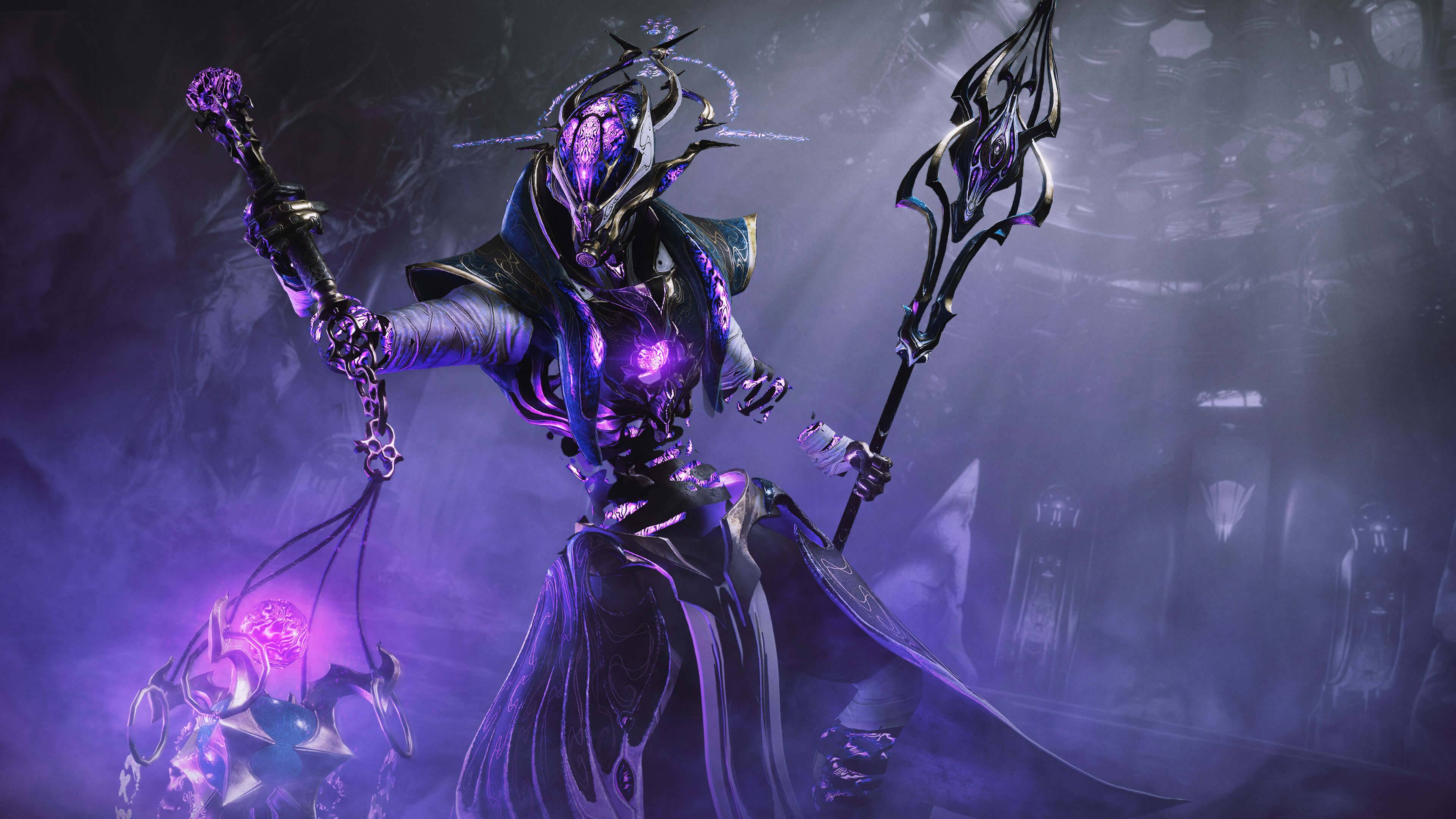 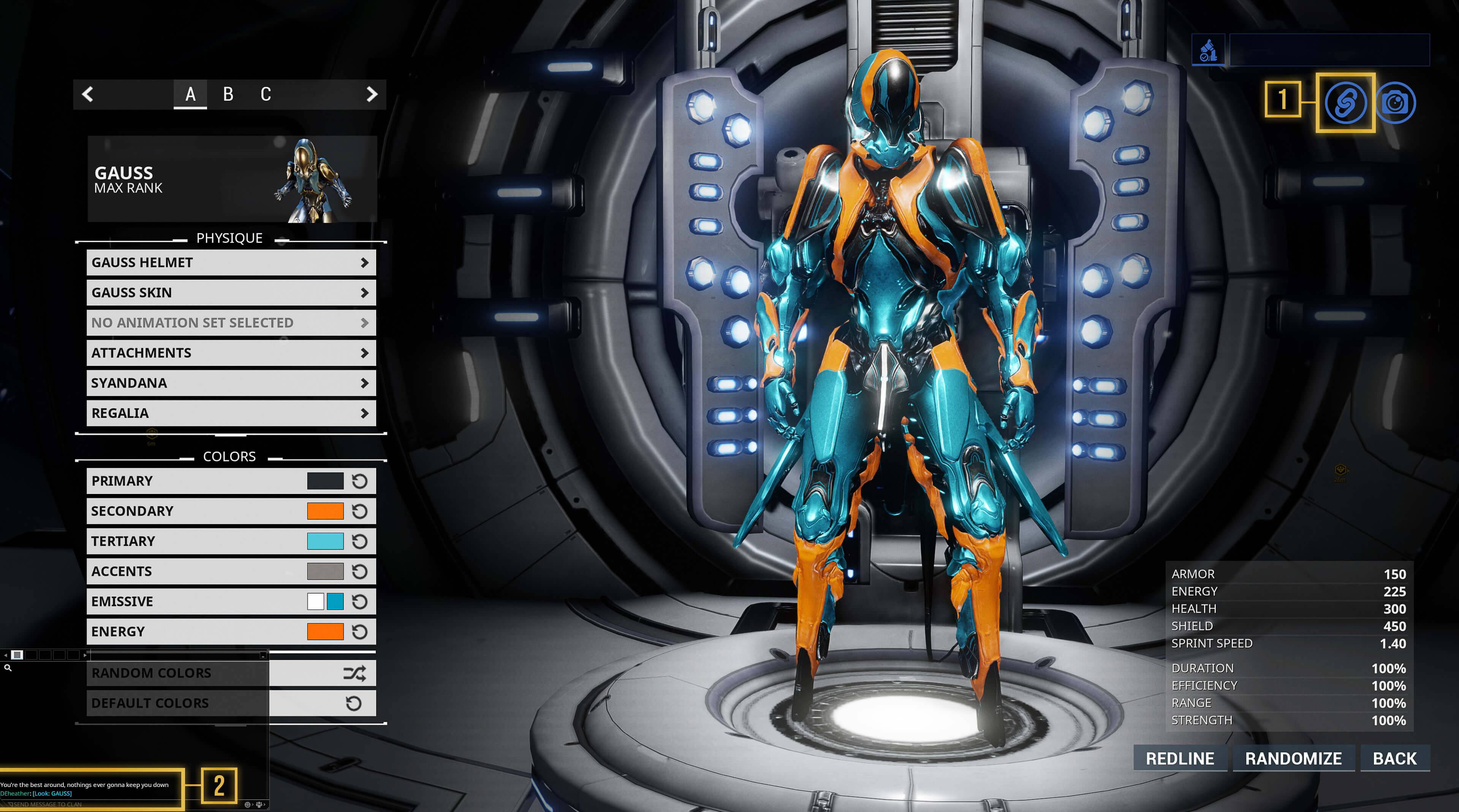 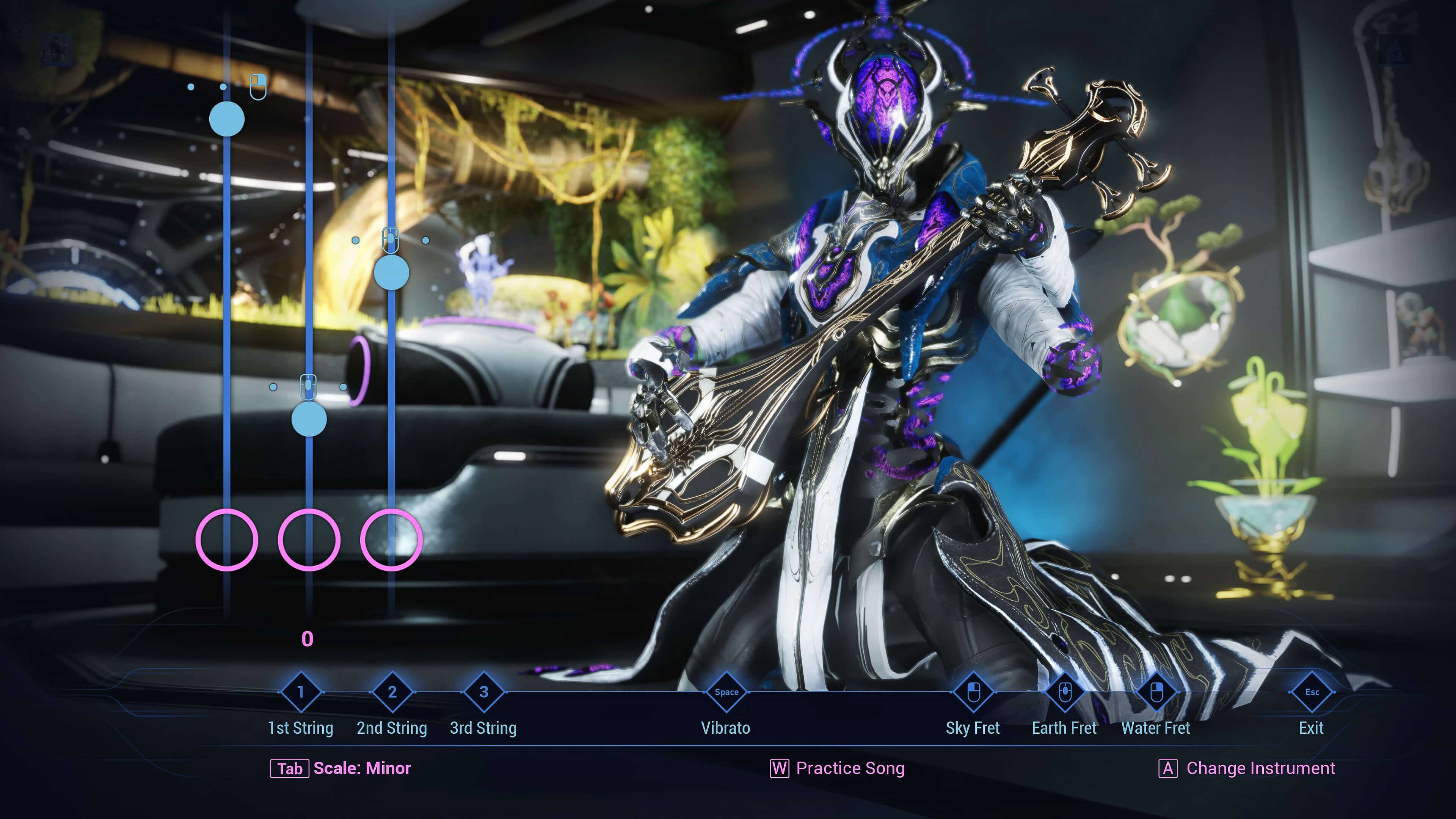 Does your love for Infested Aesthetic spread through your being like a festering disease? Start crafting today and get your hands -- or hand-like appendages -- on Infested Dojo pieces that would make Lephantis wriggle with pride. 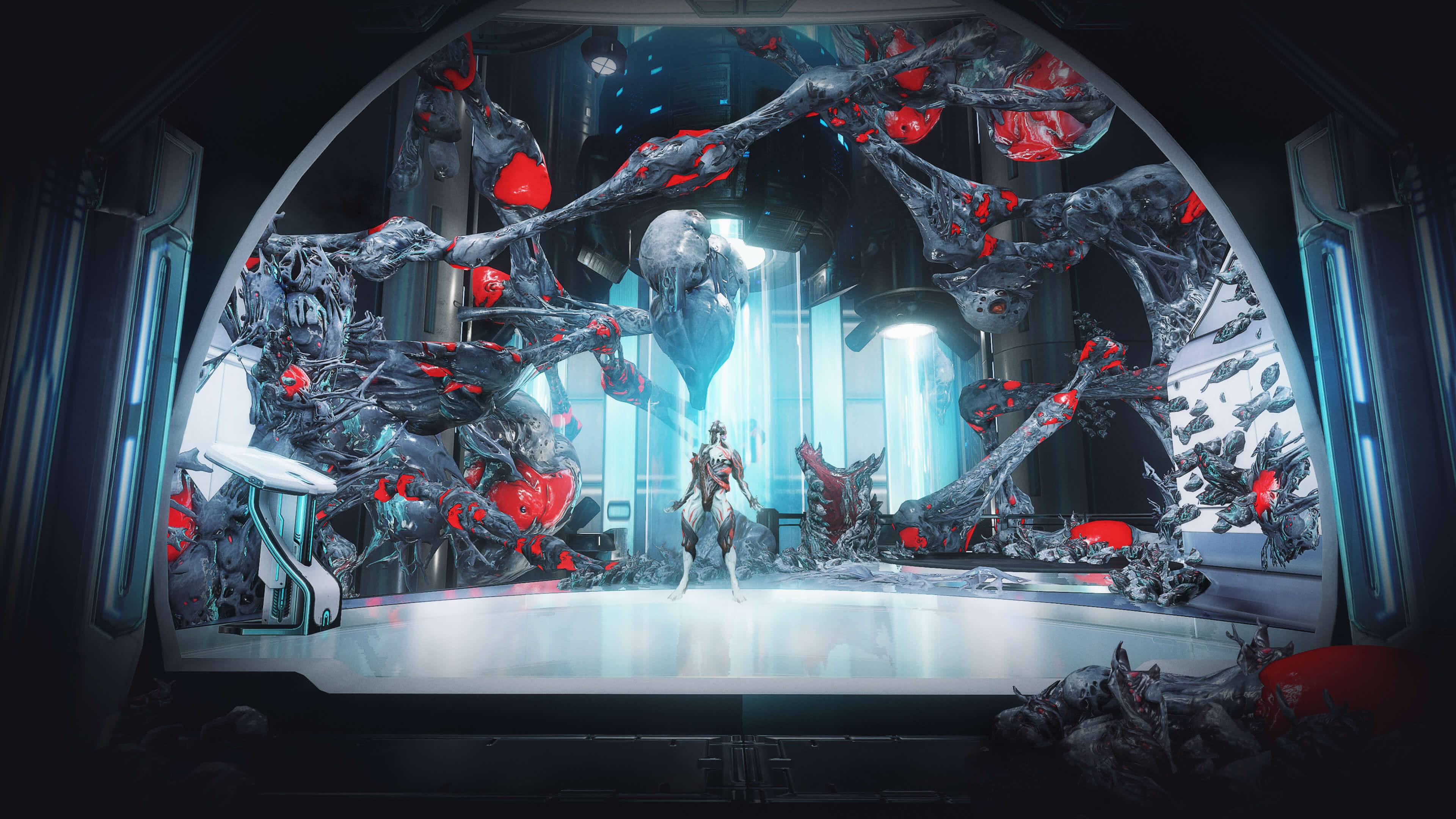 • Riven Slot Increase: players can now increase their collection of Riven Mods from 90 to 120.

The next mainline update for the Nintendo Switch is here! Since these updates tend to be quite large, we took a look at how we can save some space to make way for this behemoth. That said, we have remastered shaders once again for the launch of Update 25.7.4.

Please note that the download size will appear larger (2.5 GB) than the update's actual total size. This is due to the remastering process so it will take a bit longer to download. However, once it is complete, the update's total size will only be 1.6 GB. This will make Warframe's total size on the Nintendo Switch approximately 17.9 GB.

Prepare for the update by making sure you have at least 2.5 GB free on your Switch in order for the download and its remaster portion to begin.