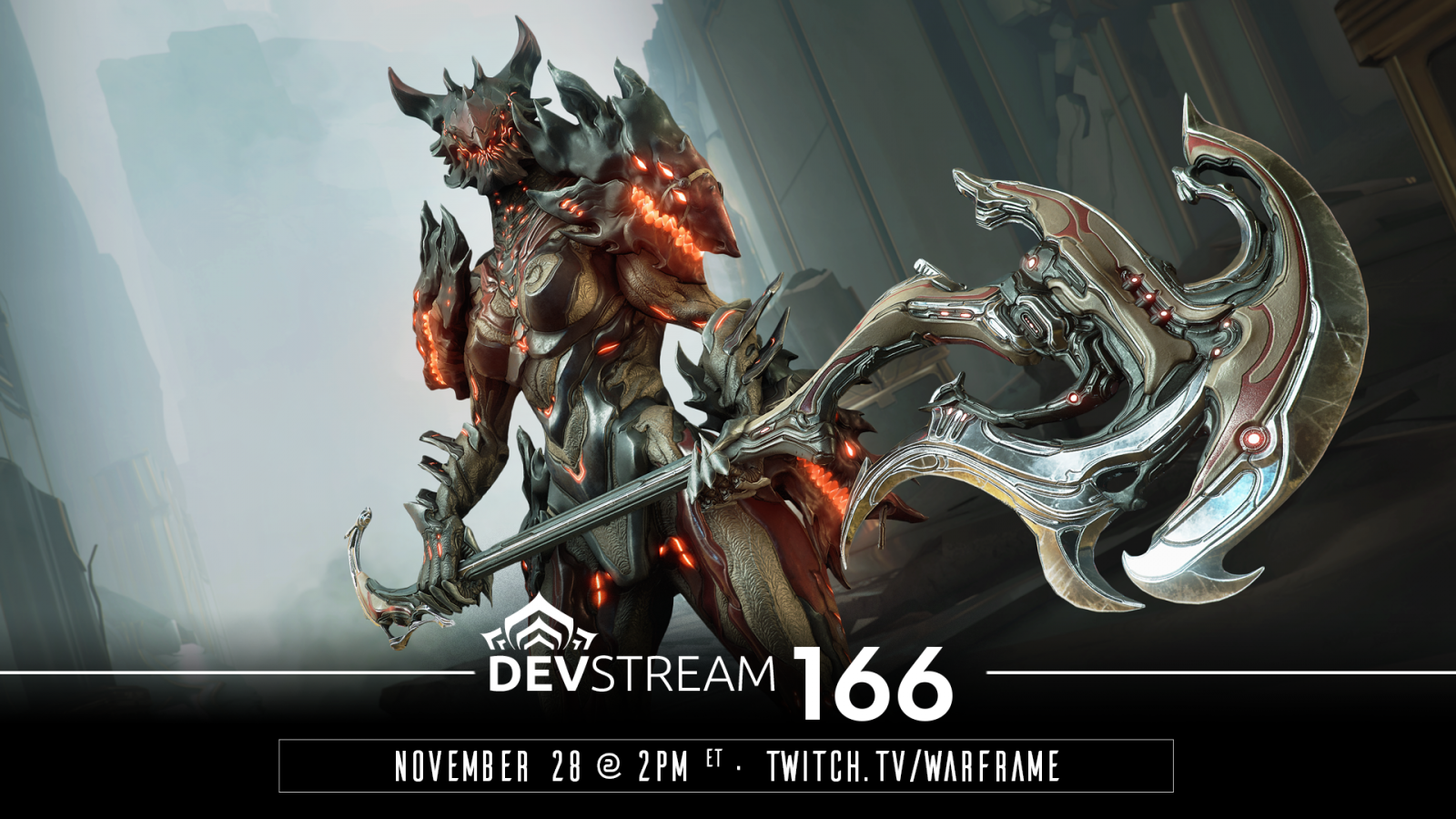 Welcome to the final Devstream of 2022! We’re joined this week by Kary (Art Director), Megan (Community Creator), and Rebecca (Creative Director) as we look at the upcoming Lua’s Prey update.

For a look at Voruna’s Kit, Grendel and Yareli Reworks, our next Prime and more, check out the full episode on our YouTube channel. Or, as always, catch the highlights in our overview below.

- Don’t miss the Gift of the Lotus Alerts live for 24 hours after the stream. You have until November 29 at 3pm ET to earn your own Orokin Reactor, and Orokin Catalyst.
- Our Cross Play journey continues. We are intending to quietly turn on Cross Platform availability for other platforms in the future -- so look out for some surprise tests hopefully very soon.
- Visit Varzi on December 1st for new Prime Resurgence offerings: Ivara Prime and Oberon Prime!
- Tennobaum Festivities are returning in December 2022!
- Prime Gaming Season 5 has started with the wonderful Octavia Iridos Bundle!
- As we move into the holiday season, look forward to a Duviri-focused Devstream in January 2023.

Our next Prime has been revealed. Players can expect Baruuk Prime, arriving soon! When this new Prime Access launches, players will also be able to acquire: 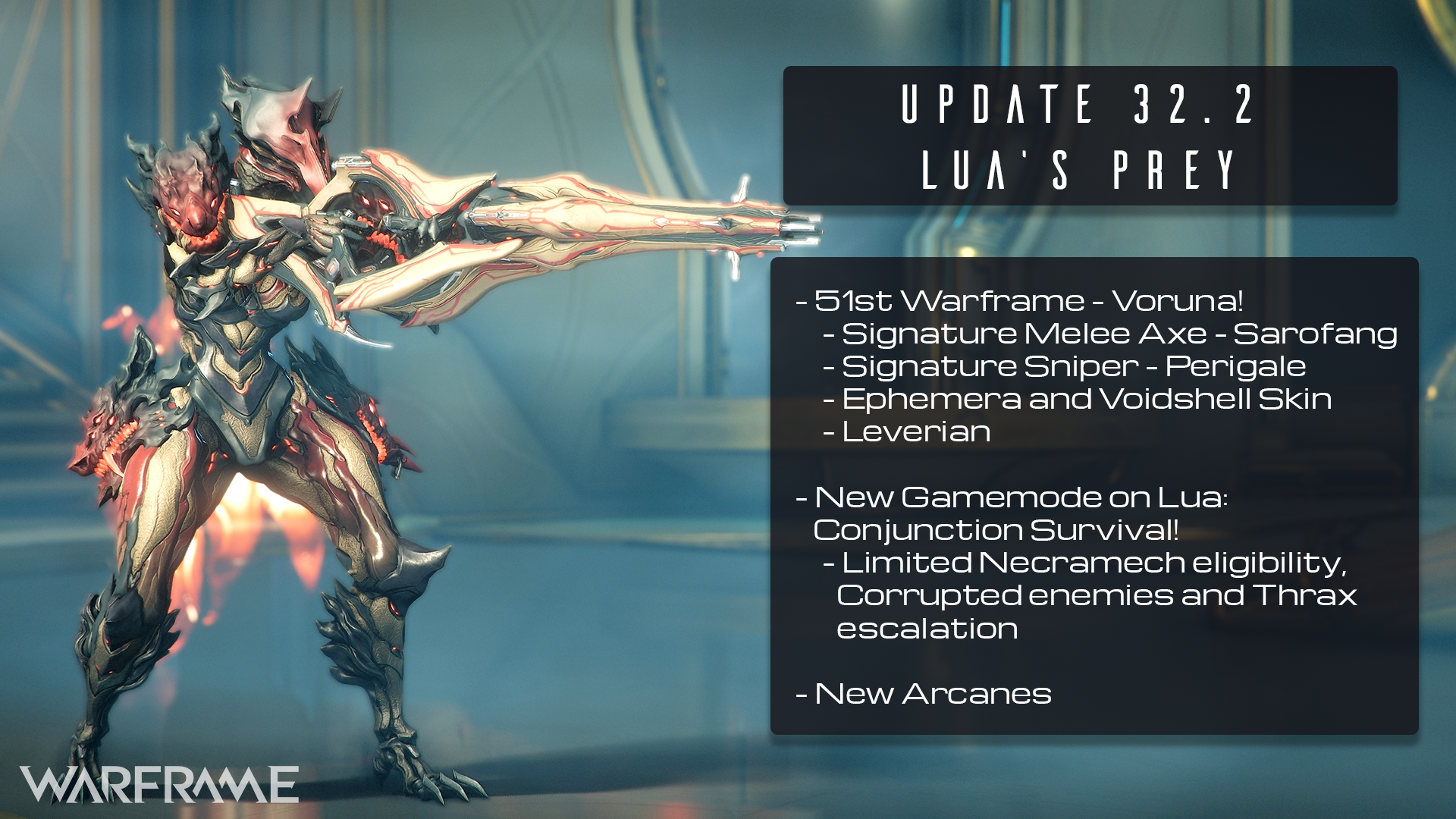 Voruna, our 51st Warframe, is coming with Lua’s Prey! In this update, there will be two ways to obtain her on the free path:

The first path is to earn her blueprints from the new Lua Conjunction Missions, which we covered in Devstream 165. As a quick recap, these missions are a Survival variant with added lore and gameplay challenges:
- Players will be able to use their Necramech for 2 minutes on a 10 minute cooldown in this mission.
- Every wave, new Lua Thrax Variants will spawn that accelerate your Life Support drain, making them a priority target!
- A Dax Ally wanders about the tileset between Life Support towers. Standing within his strange aura will offer you Ability Strength and Casting Time buffs.
- There are two different nodes for this mission type as they offer different rewards and challenge levels.

The second path is to trade the new Lua Thrax Plasm resources with Yonta in the Chrysalith for her Blueprints. This approach is similar to what we did with Lavos in Orphix Venom, where players can directly purchase the blueprints you are missing if you’re having bad luck!
- Lua Thrax Plasm is obtained from Lua Conjunction Nodes as a guaranteed reward every 5 minutes
- The amount earned scales with mission difficulty, if you are up for the challenge.

Visit Drusus to be regaled with the tale of Voruna and her companions. Tour through custom murals and search for her Prex Card. While you are there, you can also replay the Lua’s Prey official cinematic for your viewing pleasure.

For lore reasons, this Leverian is only accessible to Tenno who have completed The War Within! 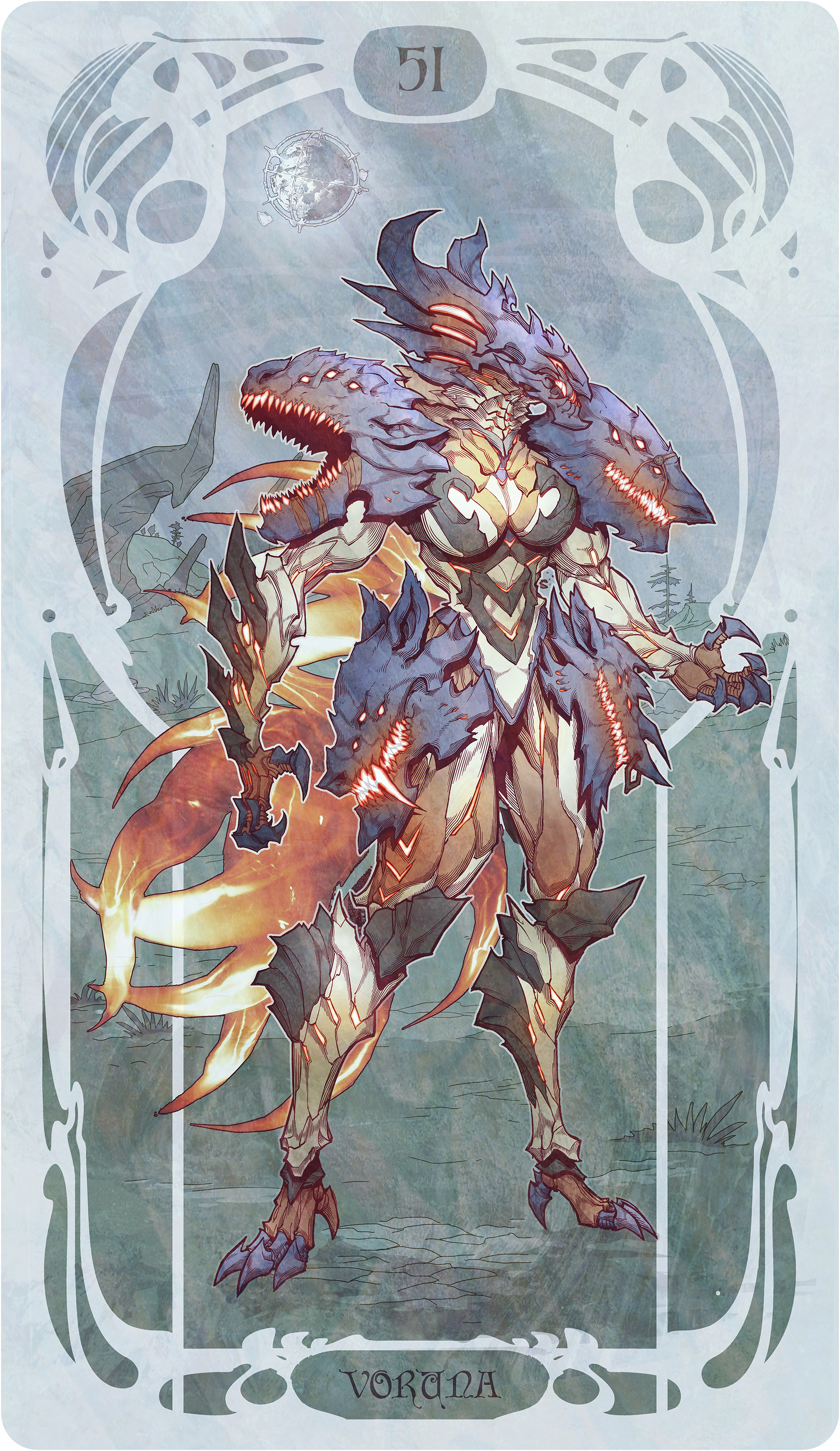 While we are close to releasing Voruna, please keep in mind that final balancing tweaks and changes are always possible up until release. Descriptions of what you see below may not be final!

PASSIVE
Voruna never fights alone, and as a result has access to four different passives she can swap between. In mission, hold the Ability key to call upon each wolf’s unique Passive power. There is no energy cost to swap between passives, but you can only unlock the passives for abilities you have unlocked.

Here’s a look at that swapping and custom HUD in action:

Ability 1 - SHROUD OF DYNAR
Dynar shrouds Voruna with invisibility and accelerates her speed. Invisibility ends when Voruna attacks, but if you perform a lethal hit within a short window after invisibility ends, you earn a Critical Damage and Status Chance buff.

Ability 2 - FANGS OF RAKSH
Cast upon an enemy to jump onto them, where they are afflicted with 5 random Status Effects are applied at 10 Stacks each. On target's death, spread the Status Effects to other nearby enemies.

Ability 3 - LYCATH’S HUNT
Lycath hunts to sustain the pack. There is a chance for enemies killed by melee attacks to drop health orbs. Enemies killed by headshots have a guaranteed chance to drop energy orbs.

*This is Voruna’s Helminth ability at 50% its efficacy.

Ability 4 - ULFRUN’S DESCENT
(TAP) Voruna drops to all fours and prepares 5 brutal charges that lock onto enemies. Ulfrun, the most powerful wolf, leads the attack as Voruna dashes toward her target. A lethal attack doubles the damage of your next charge, so pick your targets wisely.

Voruna is coming with her own Signature Weapons:
- Perigale - Primary Sniper with custom sniper UI.
- Sarofang - Axe Heavy Blade melee weapon.
- Not a weapon but a killer piece of Fashion -- she is also bringing her own Okuri Tails Ephemera which can be used on all Warframes for those who purchase it.

Voruna is also coming with her own Voidshell Skin and Alternate Helmet, which can be seen here:

Finally, we have a treat for our sound design lovers out there, courtesy of Mark from our Sound Team! Hi Mark! 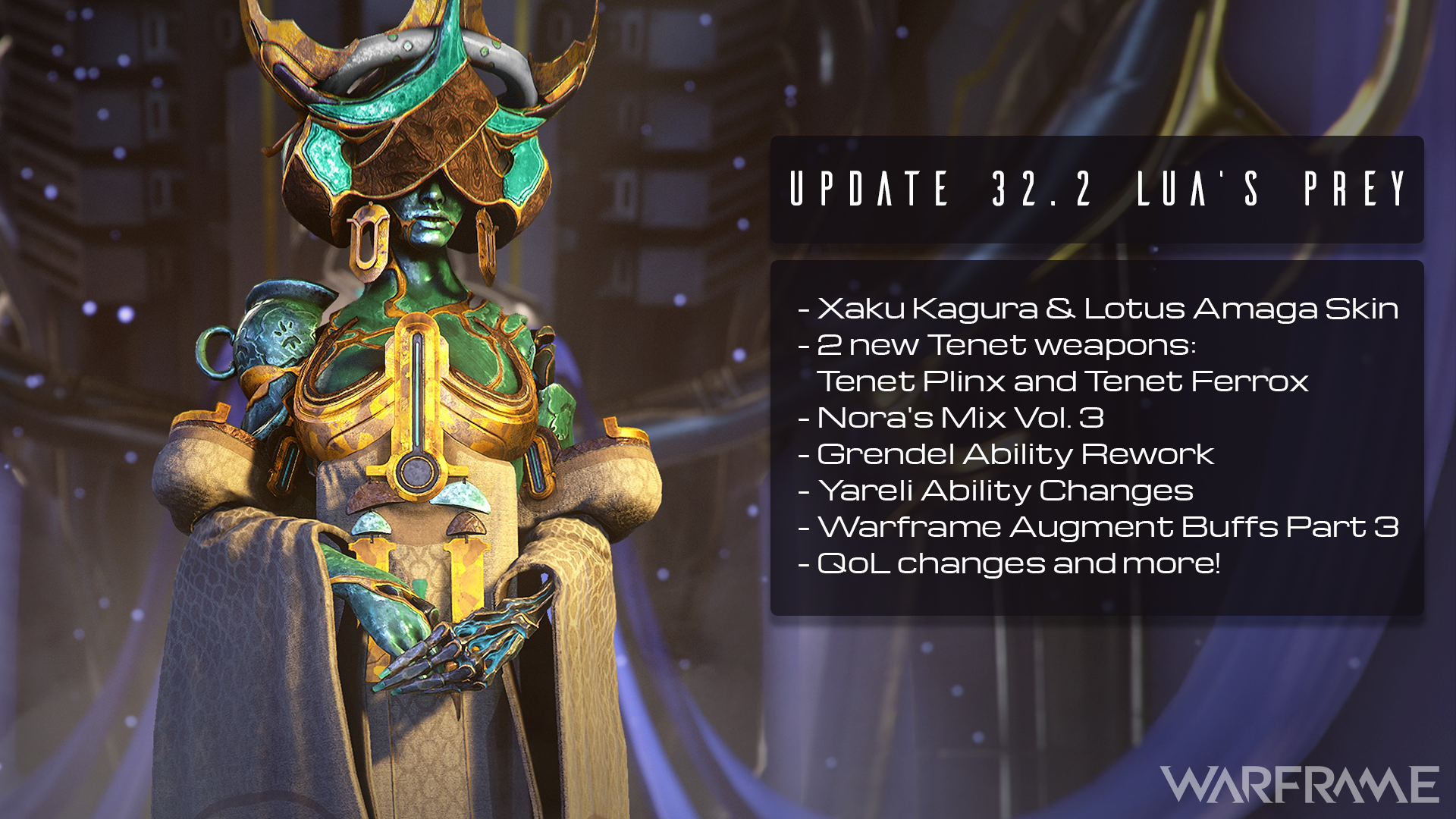 Grendel is getting a complete refresh of his kit! Since Pablo made such a wonderful overview video (I hope it wins all of the awards at whatever film festivals he submits it to), we will not be showing clips -- you can see the full rotund glory of Grendel in the video above. Here’s a quick recap of what is changing:

Passive: Armor gained from enemy in gut buffed from 50 to 250

Feast:
- Reduced number of total enemies Grendel can eat to 5. There is a new UI indicator showing the health of each individual in his gut as well.
- Removed energy drain from enemies in his Gut.
- Gourmand Augment Mod is changing to offer an additional 150 Armor per enemy (400 total) in his Gut.

Nourish:
Removed “cycle to cast” mechanic, and now all buffs are triggered upon ability cast.
Casting heals Grendel for a flat health value, and applies the following buffs:
- 2x Energy efficiency from Orbs for Grendel and Allies in range.
- Grendel and buffed allies explode radial Viral Damage causing 10 stacks of Viral Procs and staggering enemies.
- Grendel and allies within range get bonus Viral Damage on their weapons.

Pulverize:
Now in the third ability slot!
- No longer requires enemies in your Gut to cast, but there is an energy drain for being in your Pulverize form with an empty Gut. Now you are incentivized to keep Feasting to stop the energy drain!
- Speaking of, players can now cast Grendel’s other abilities in Pulverize.
- General movement improvements for the ability.
- Heal over time added while in “meatball” form, which decays the longer you stay in the ability.

More wonderful videos from the wonderful Pablo! As a quick recap of what is discussed in the highlight above, Yareli is receiving the following changes:

Sea Snares:
- Enemies captured in Sea Snares now have 200% Damage Vulnerability from all other sources. This includes enemies who are immune to being crowd controlled by her snares (Eximus with Overguard, etc.) -- they will still get hit extra hard after being caught.

Merulina:
- For the first 4 seconds after casting, Merulina will gain Health instead of losing it when being attacked, similarly to how Iron Skin functions. Additionally, Yareli will be temporarily invulnerable during the damage absorption.
- Merulina will persist with your Warframe when transferring to and from Operator.

Riptide:
Riptide can now be cast in different ways for different effects:
- Tap to create a Riptide water tornado that pulls in nearby enemies.
- Upon expiry of the ability, or when recasting while Riptide is still active, the existing Riptide will explode.
- Press and hold to create a Riptide that automatically pulls enemies in and explodes them out (how it used to work before).

We have discussed Self Damage returning at length in previous Devstreams and we initially had it slated for release with Lua’s Prey. After much further testing and discussion, this system change was pulled from Lua’s Prey as we believe it requires further tweaking -- we want to ship a revision that we are confident in, and the expansive complexity of this change requires more time.

For transparency, we do not anticipate release with Duviri either, but we do intend to revisit this topic and release a Dev Workshop when bandwidth allows!

We’re on the third and final part of our Augment Review, where we are revisiting old and underused Augments! You look forward to actual details on the changes in our update notes on Nov 30th, but here is a list of all augments that are being buffed:

We’re buffing Eximus Health values as part of our on-going review of this foe revision. While Health is being increased, we are greatly buffing the threshold needed to Mercy kill them, for those who like that approach. Now Eximus will only need to be below 80% to trigger a Mercy Kill, versus the original 40% health requirement. For clarity, their Overguard values are not being touched.

Additionally, we are looking to make their spawn rate more consistent overall, so players can expect to see Eximus units show up after the first 60 seconds of a mission.

- Health Orbs now give 50 instead of 25 health.
- Trinity’s Well of Life is getting a buffed range. Additionally, allies within range will be protected against status effects.
- This update also fixes some Cross Play bugs: Players will be able to view profiles on other platforms. Fixed players losing their Relay blessing when returning to their Orbiter. And fixed Players being unable to see each other in Relays!
- We’re adding an Arcane Segment to your Arsenal to help you better manage this equipment!
- While reviewing the stats of some weapons with a semi-automatic mode, we noticed that certain weapons had an unsustainably high fire rate for most players. We lowered fire rates to a more humanly achievable level and improved their damage or reload stats to compensate.

Rebecca mentioned new Arcanes that are coming that will be acquired via Lua Conjunction Missions. While she didn’t go into specifics, she did mention that one will make your health value scale with every health orb that you pick up.

- Players can find the Tenet Plinx in the weapon pool while hunting down Sisters of Parvos!
- Ergo Glast will offer the Tenet Ferrox in his shop in the Relays.

Players can expect Platinum-purchased Supporter Packs with this update. Previously our Supporter Packs could be purchased only with real money, but we are exploring different ways to offer monetization options that have less scheduling restrictions on our end.

We’ll leave you with a little look at what to expect with Duviri in 2023.