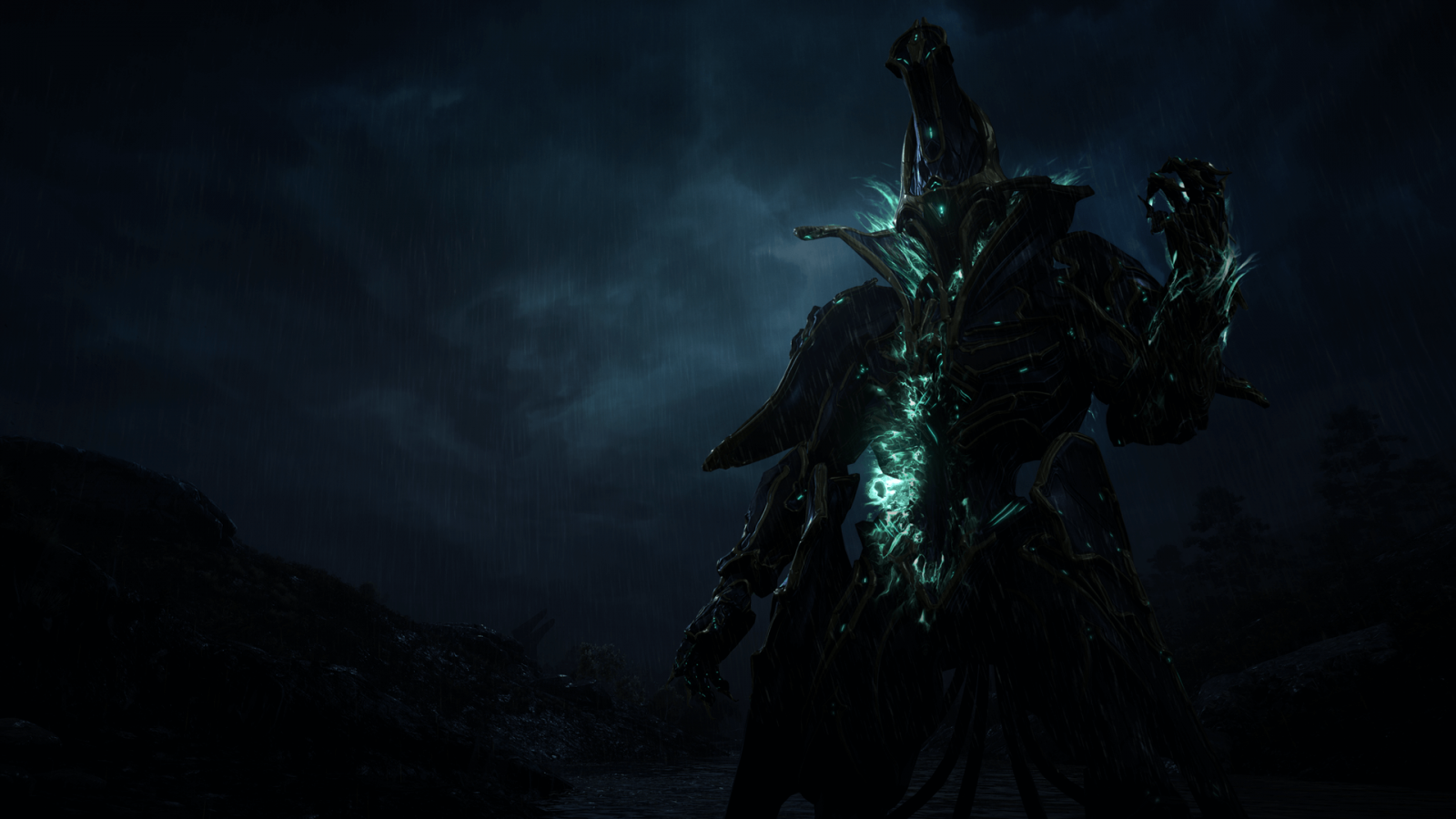 We’re back with Devstream 164 and with it came a look at Echoes of Veilbreaker, Revenant Prime, Crossplay Testing, and more!

We’re joined this month by Rebecca (Creative Director), Megan (Community Director), Pablo (Lead Designer), Erich (Lead Sound Designer), and Eric (Lead Concept Artist). Double Eric(h)s on the couch, it’s gonna be a good one. You can catch all the action in our full episode on our YouTube channel, or read the highlights in our overview below:

Prime Resurgence has returned as a replacement for Prime Vault! Players can expect the next rotation will be Valkyr Prime and Saryn Prime on November 3rd.

Gift of the Lotus Alerts are live for 24 hours after the stream! Don’t miss out on your chance to grab a Rifle Riven Mod and an Exilus Warframe Adapter.

September 30th is the National Day for Truth and Reconciliation in Canada, which is why you may have noticed lots of orange on-stream! In honor of all victims and survivors of residential schools, we have made a donation to True North Aid. We invite all who are able to donate as well.

On the note of fundraising, our Quest to Conquer Cancer event is returning on October 3rd! Join us for the month of October to help raise funds for the Princess Margaret Cancer Foundation, and unlock extra incentives in-game.

Our kick-off stream is on Monday, October 3rd at 2pm ET on twitch.tv/warframe. You can check out the full schedule of fundraisers for next week in our official forum post!

Tennotober is back for the month of October! For those not in the know, we provide daily Inktober-style prompts for our community to draw -- which we then show off in our Prime Time streams.

This year we are also expanding official support to our Captura community with the same prompts. We were inspired by the incredible community-run Captober campaign last year and we are happy to launch an official DE Tennotober for Captura this year!

You can learn more in our forum posts below:
Tennotober Thread
Tennotober Captura Thread

Just in time for spooky season, Revenant Prime is coming October 5th on all platforms! With him, you can also grab:
- Phantasma Prime
- Tatsu Prime
- Vetala Prime Armor
- Prime Syandana 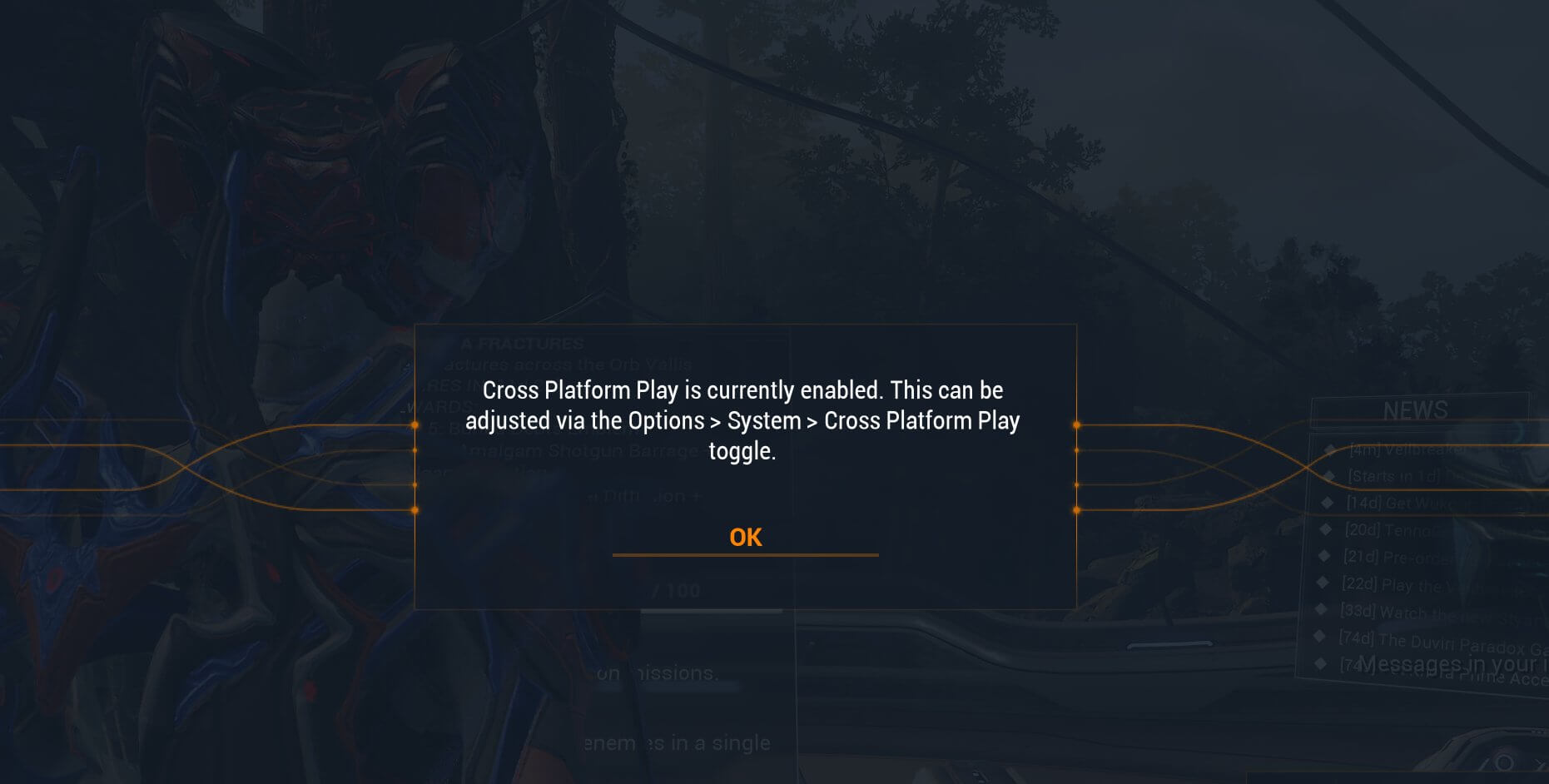 “Crossplay when??” spammers rejoice -- we have some news for you!

If you missed it, we ran a short test earlier this week of Cross Platform Play between our PC and Xbox players. We’ll be running more tests across various platforms in the future, but this was a major step in our crossplay journey. As a note, we will not be announcing these events ahead of time to ensure that we have an accurate representation of playerbase activity, so keep an eye out for cross platform logos in region chat just in case! 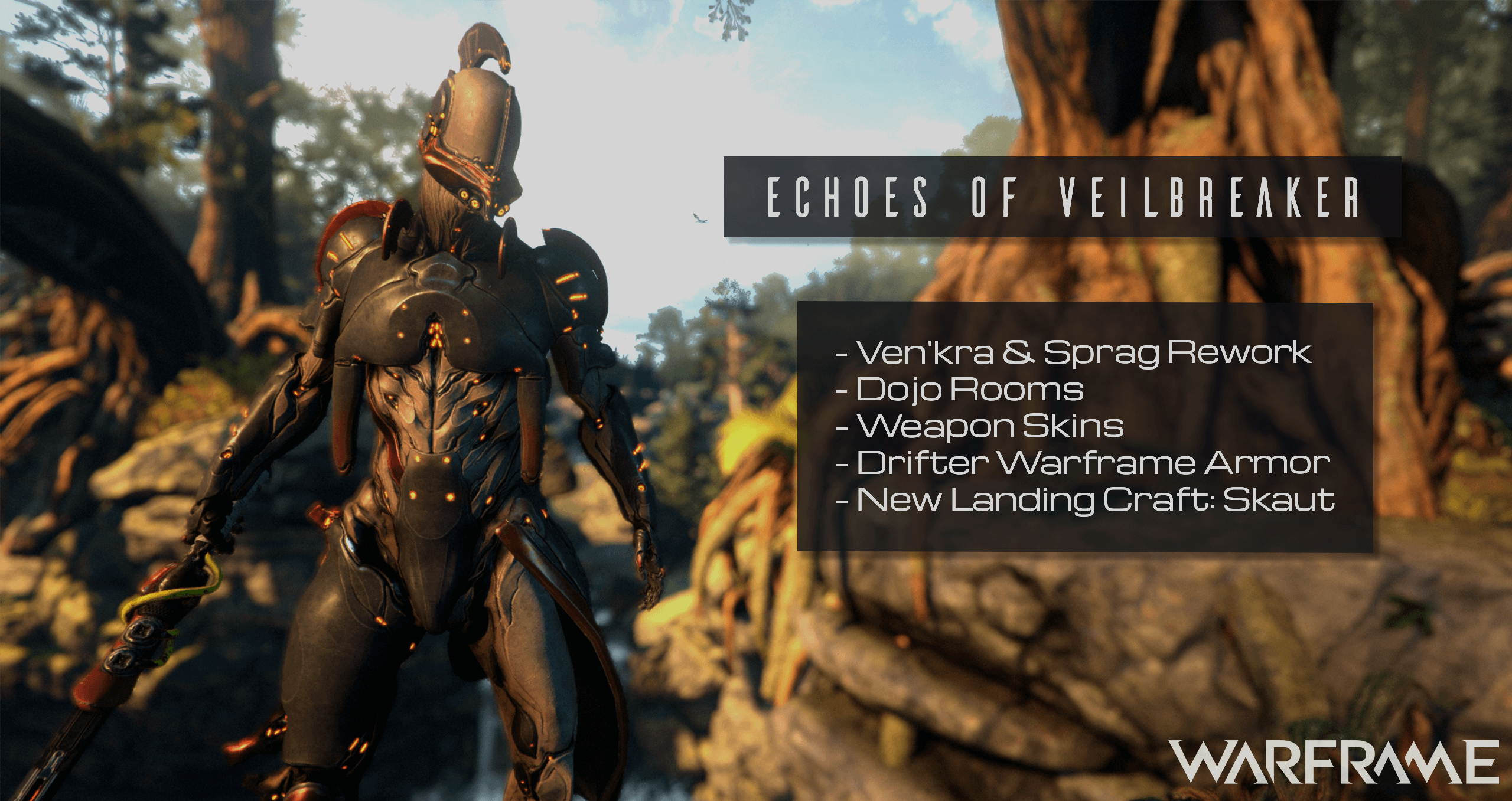 This year you may have noticed a trend of “Echoes” updates (Echoes of War, Echoes of the Zariman, etc.) -- and we intend to continue that with Veilbreaker. In a coming release, players can look forward to a blend of community feedback iteration, as well as content that didn’t quite make it into the initial update.

Here’s a quick overview of what we’re planning for Echoes of Veilbreaker: 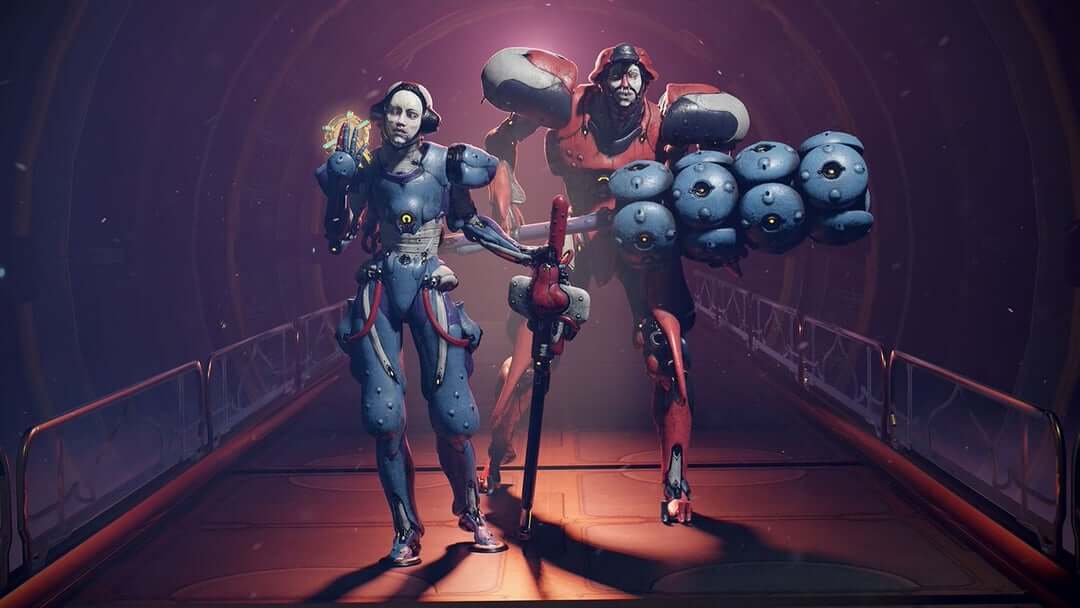 Devstream veterans may recognize the image above. A rework of these two Void Sabotage enemies was discussed in the past, and now players can expect them soon -- but with a twist.

Their new fight mechanics will make an appearance in Kahl’s weekly missions, as they have a different relationship as Grineer. For the usual Void Sabotage missions, they will be getting an aesthetic update, but their mechanics are currently staying the same.

Speaking of looks, their weapons will also be available as Weapon Skins for players to use.

Dojo lovers will find a new room available to them with this update: the Ostron Cove! With it are also 200+ Ostron-themed decorations to make it feel like Konzu is saying “Swazdo-lah” every time you walk in the door.

There’s a lot of work that goes into getting your weekly Archon Shard and we want you to be able to show it off more! We’re working on a heavily work-in-progress version of an Ephemera that will let you do just that:

As your work in Kahl’s Garrison continues, we are iterating on some community feedback and looking to expand on the side content available in the Break Narmer missions.

One major piece of feedback we are working on is making bonus challenge progress cumulatively track across missions. For example, if you found 2/5 Genestamps in your first run, you’d only have to find 3 more in a following run to complete the challenge. We’re still nailing down which challenges this will apply to, so stay tuned.

To set expectations, we are focusing our narrative content on Duviri so we are not looking to expand on the Kahl’s Garrison story with our Echoes of Veilbreaker Update. But perhaps you’ll see more in the future!

- Operators and Drifters will be able to equip Warframe Armor, similar to Kahl and Railjack Crew! There may be some pieces that are excluded, but we have been working on this functionality for quite some time and are excited to finally launch it.
-New landing craft - Skaut!

With discussion of iterating on player feedback with Veilbreaker, understandably damage attenuation is part of that conversation.

At this time, we are actively working on ways to improve Archon Fights to address player feedback but we do not have a concrete plan just yet. Balancing the wider array of Tenno power level and enemy difficulty is not easy, and we want to ensure that our next iteration feels right. This is an ongoing process of trying different approaches, and we’ll share more once we’ve found a change that we’re ready to move forward with -- in short, we’re not quite there yet.

Additionally, for those curious about Area of Effect and Ammo Changes, we did mention that we may do further tweaks as needed, but we feel it is too early for us to assess if further adjustments need to be made, if any. We’ll keep you updated!

As a treat, Erich from our Sound Design team brought us a banger of a video showcasing all the work that went into Styanax’s ability sounds. The best way to consume this content is via video, so we’re prepared a highlight of that specific section to watch here! 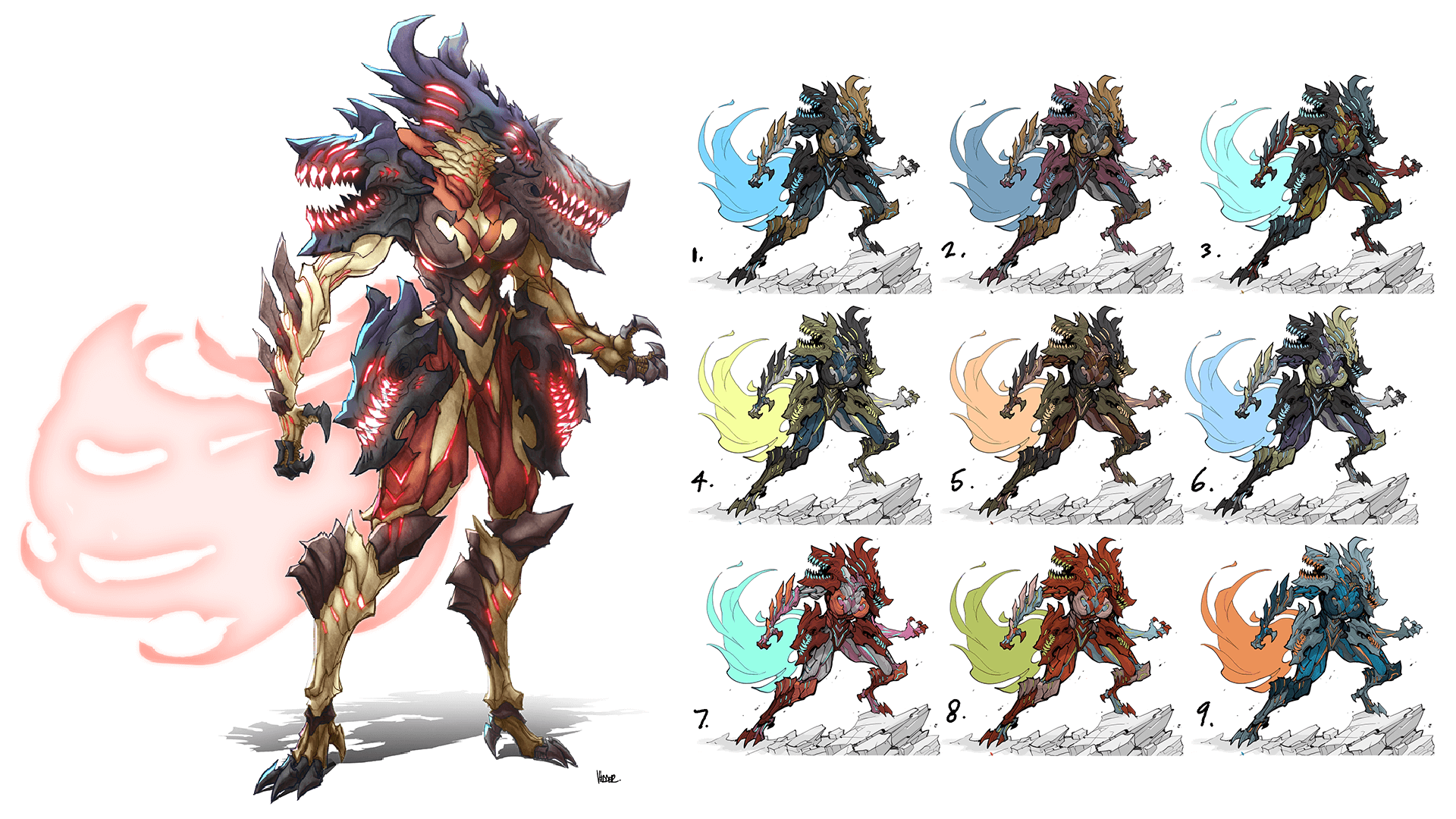 Revealed at TennoCon, designed with help of Joe Mad, our wolf-inspired Warframe finally has her official colour palette! The main image is the final design, and you can see some of the colour explorations beside her.

Additionally, our Design Council has the opportunity to submit name ideas for our Wolf. We’ve added an incentive to our Quest to Conquer Cancer campaign where the entire community can vote for her name from a curated list pulled from the Design Council thread.

Finally, what is a bad-ass wolf without a bad-ass weapon? Below is a concept of her first (of two) signature weapon: an axe!

Daughter is returning in her Naberus garb on October 5th, and is bringing the Naberus Celebrations with her! Log in during the event to exchange Mother Tokens for some spooky wares.

This year we are introducing some new offerings to her store, including:
- Jackonaut Statue
- Revenant in Action Glyph
- Halloween Orbiter Decorations
- Sheev Blueprint and Components!

With our Ammo Pickup changes, we noticed that the actual models were looking a little out of place in 2022 Warframe. So we’re working on updating their looks to help them be visually distinctive outside of colour differences, and also make them feel a little more up to date: