Sign Up
Devstream 162 Overview
A look at Echoes of the Zariman, plus TennoGen 22, and more!

We’re back with our final Devstream before TennoCon 2022, and we’re taking a look at our next interim update: Echoes of the Zariman. Take a look at Cavalero’s new Offerings, Overguard Changes, Void Sling Directional, and more in our overview below.

Angels of the Zariman Spoilers are present throughout this entire Devstream, so tread carefully, Tenno

Gift of the Lotus Alerts are live for 24 hours after the stream. Don’t miss your chance at an Exilus Weapon Adapter Blueprint and an Orokin Catalyst Blueprint.  As a reminder, this is the last Devstream before TennoCon -- we’ll see you all again on July 16!

TennoCon is July 16, 2022! We’re so excited to have you all join us for our all-Digital event.

Speaking of Digital, here’s a look at the contents of our TennoCon Digital Pack, launching soon(TM):

The end of this clip also features a slight non-New War spoiler preview of the TennoCon Operator Suit.

New War Spoilers are in this clip, so tread carefully!

This pack will also come with a Glyph, a Sigil, some Platinum and a ticket to Baro’s relay -- and possibly more! Stay tuned.

We’re celebrating Pride this year with a brand-new Pride Glyph and Pride Display designed by Debbysheen! We’re also releasing a new Pride Celebration Color Palette featuring the Progress Flag colors. The palette, Glyph, and Display was designed with consultation from Rainbow Railroad, and will be available in the Market for Credits.

Prime Time on June 2nd is going to be our kickoff celebration stream with continued LGBTQ+ Warframe Creator spotlight streams every Friday during the month of June! Check out the full schedule below: 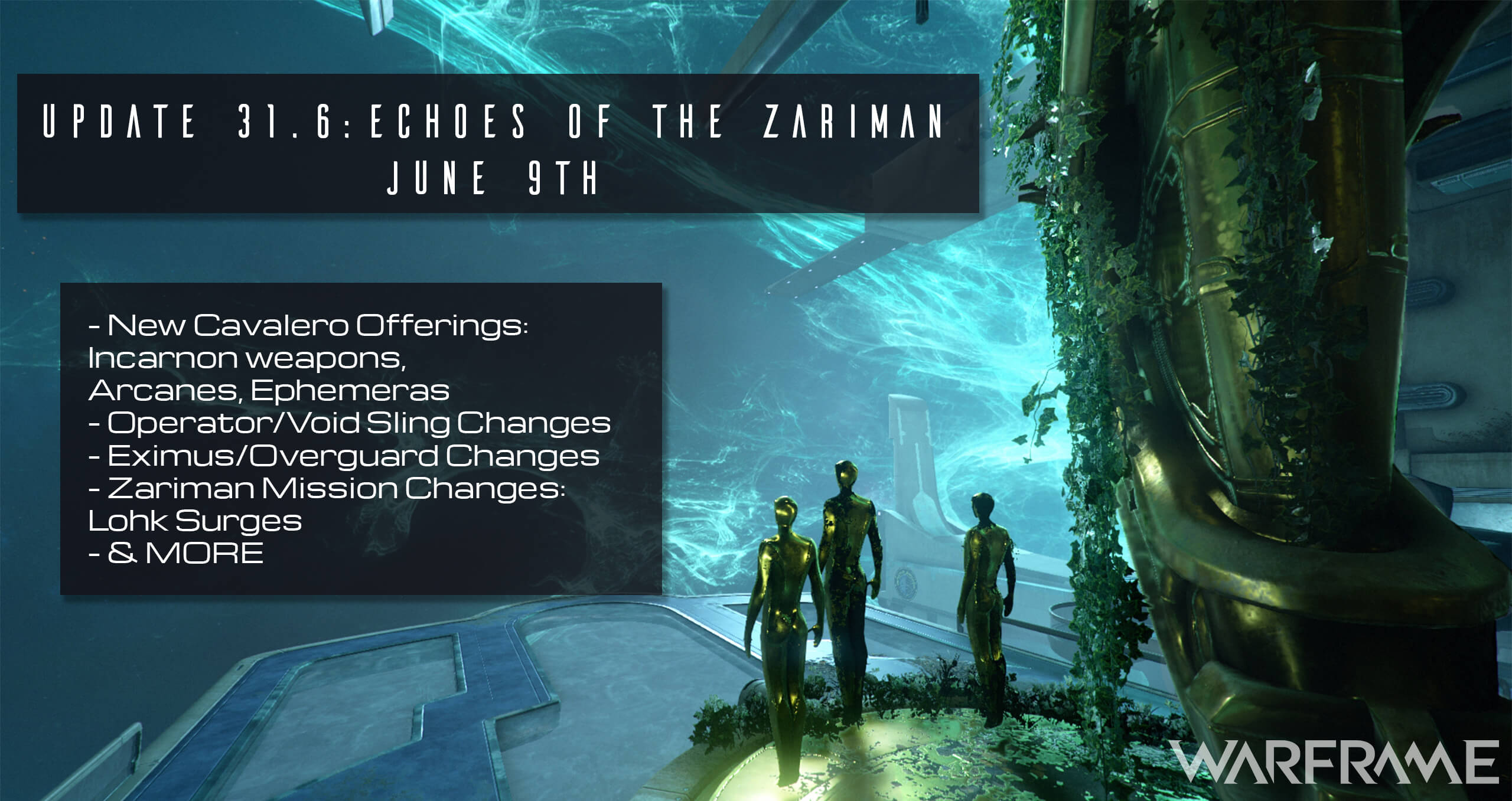 In our last update before TennoCon, we’re bringing some new content to the Zariman tileset, and some quality of life changes as well! Take a look at what to expect on June 9th on all platforms.

We are adjusting Eximus and their Overguard mechanic after much discussion and feedback from the community! Below is an overview of the changes that are coming:

We are modifying the ratios for Eximus to have less Overguard and more health/shield. We are reducing the Eximus Overguard values by 50% and we’re adding 50% health back to make up the difference. The end result is considerably less EHP for Eximus.

This change does not affect Thrax units!

Nox Eximus units are also getting a specific change to reduce the overlapping damage reduction they get from Overguard and from their Helmet mechanic. Now, if you break the glass of the helmet, you destroy the Overguard -- or you can just do enough damage to the Overguard to remove it as well.

Hear Pablo talk more about these changes, including fruit analogies, in the clip below: 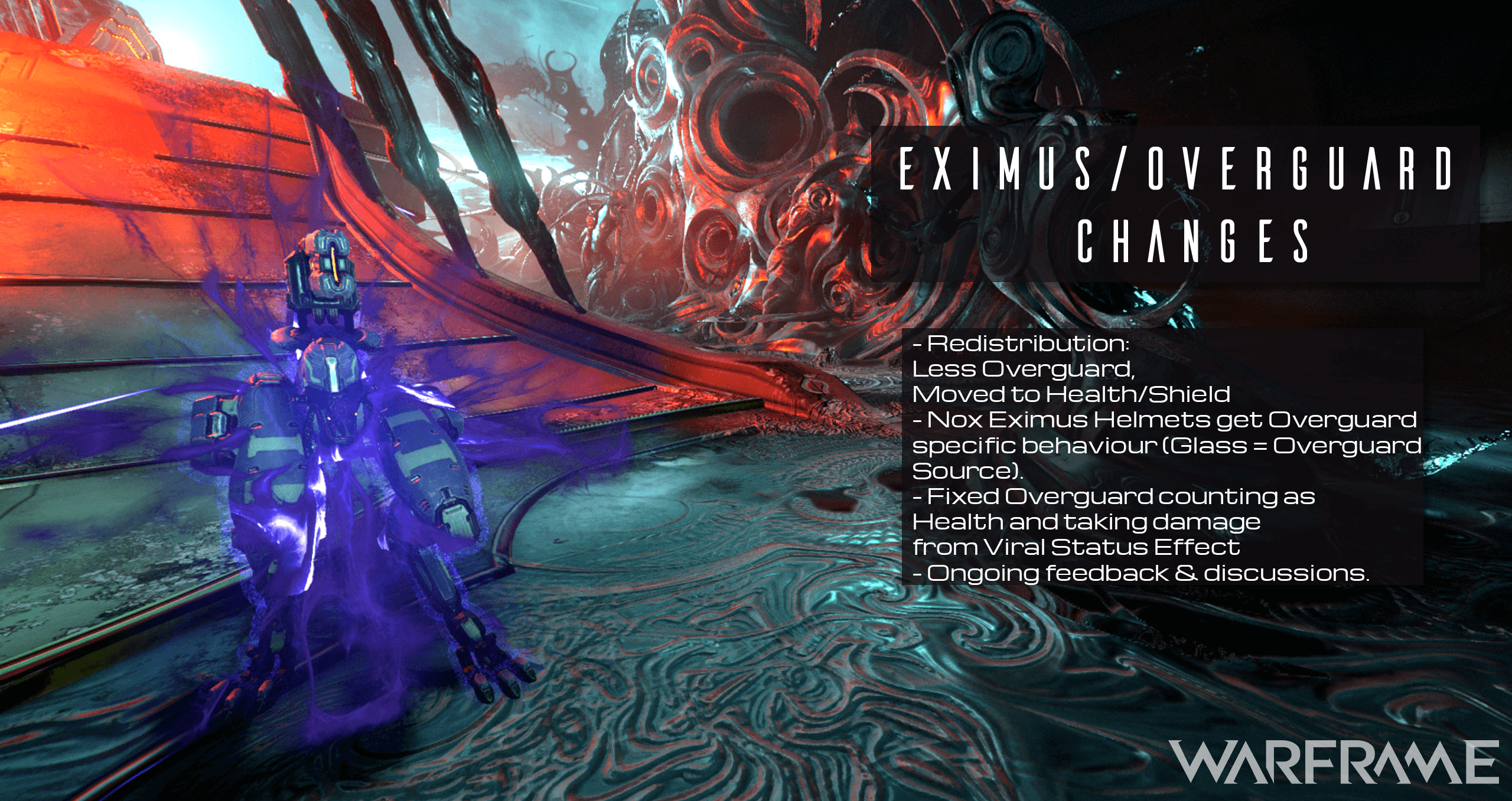 If you’re like a deeper insight at the design reasons and discussions behind Overguard, Rebecca and Pablo reflected on these near the end of the stream:

For these changes, and for other changes in this Devstream, it’s important to remember that Warframe is an on-going process and we will always be iterating. 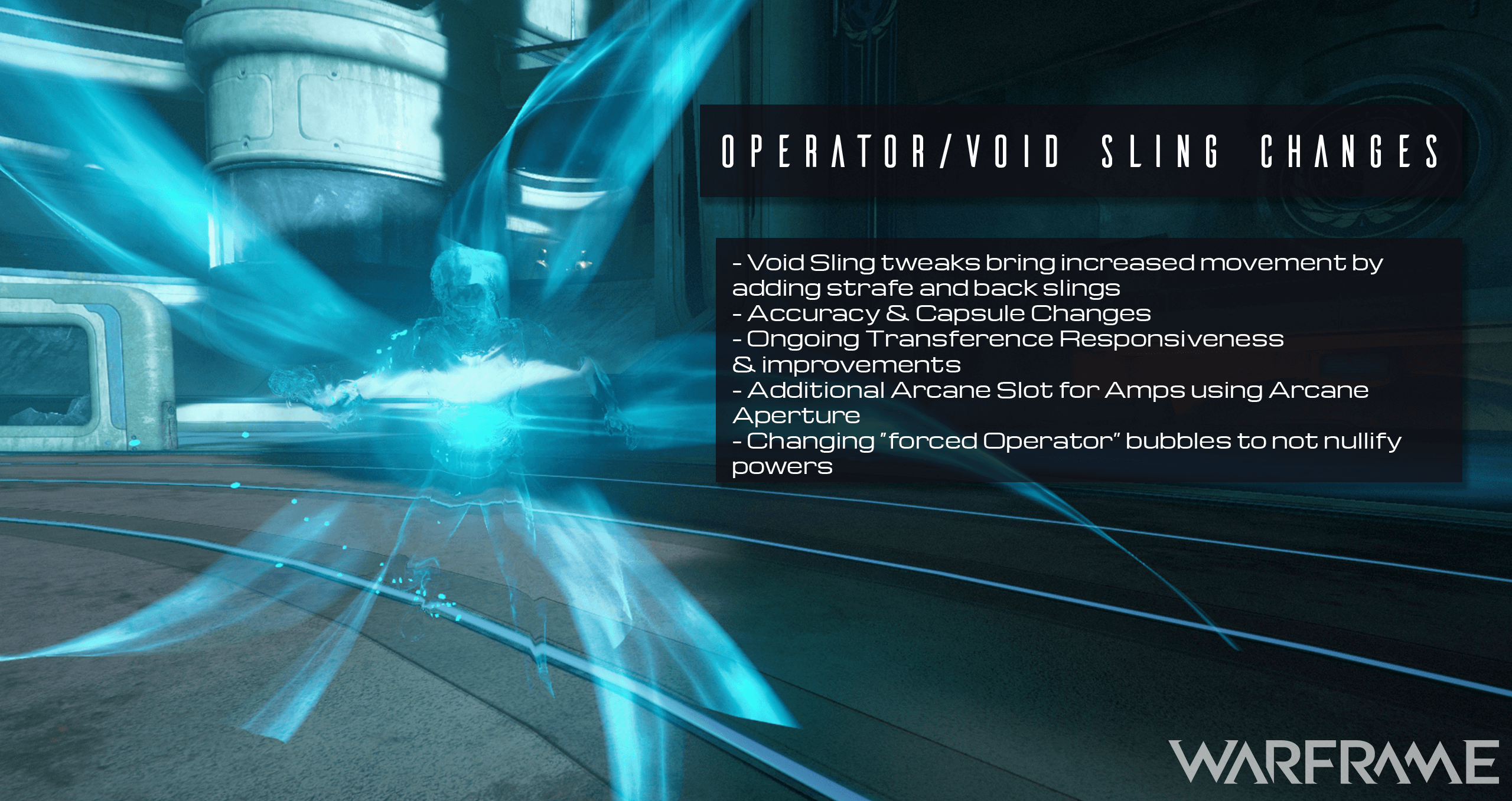 We’re adding multidirectional movement to Void Sling! As it stands on current Public build, Void Sling only lets you sling forward in the direction of the camera.

Now it’s all about player direction input, and is no longer dependent on the camera. Using PC keybinds as an example, holding the S key and Slinging causes the Operator to move backwards. The same goes for other directional keys!

General Operator Transference delay is not intended. We’ve made some changes to attempt to reduce any sort of delay in Transference, but are also doing a deeper dive to identify what is causing this, so that the overall process is faster and smoother for players.

For those with plenty of Voidplumes to turn in, Cavalero in the Chrysalith is receiving new wares in Echoes of the Zariman!

INNODEM - Dagger
Here’s a look at its base model:

And a look at its more sinister and larger Incarnon form: 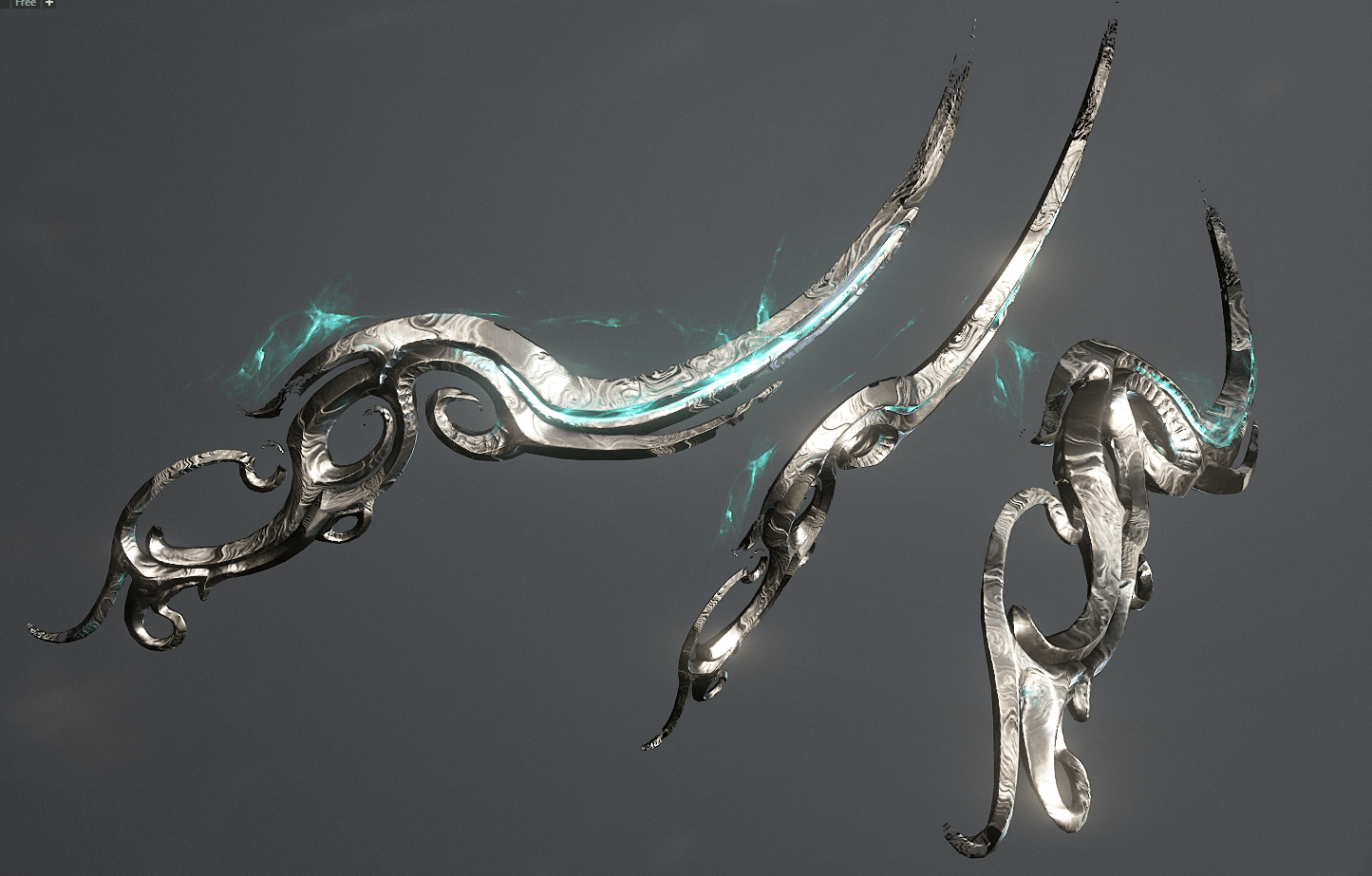 Take a look at some new Arcanes that are coming. As always, final values are always subject to change.

Molt Reconstruct (Warframe)
Heal yourself and allies 10 Health for each point of energy spent on abilities.

Fuses with an Amp to unlock an additional Arcane Slot.

Cavalero is also updating his wares with new Ephemeras that are very inspired by Void Angel and Void Energy designs. Purchase the blueprints for standing and craft them for the following effects:

Raptwing Ephemera
Give yourself an extra set of helping hands with this Angel-inspired Ephemera. The Ephemera’s arms will move to mirror your original set of arms:

Seraphayre Ephemera
Cloak your Warframe in Void Energy with this new Ephemera:

LOHK SURGES (Power Rifts)
We’re adding a new dynamic gameplay element for Zariman missions: Lohk Surges. They’re intended to be an overall benefit to your mission, but come with a bit of risk should you choose to engage with them.

Three Lohk Surges spawn throughout the tileset for players to find -- each with their own buff to activate! Upon finding it, the icon will reveal the buff it offers. Whenever you trigger it, it spawns an Eximus that you have to defeat.

There is a 10-minute cooldown for Lohk Surges after activating the buff -- but once that’s up, you can go back and activate the buff again. 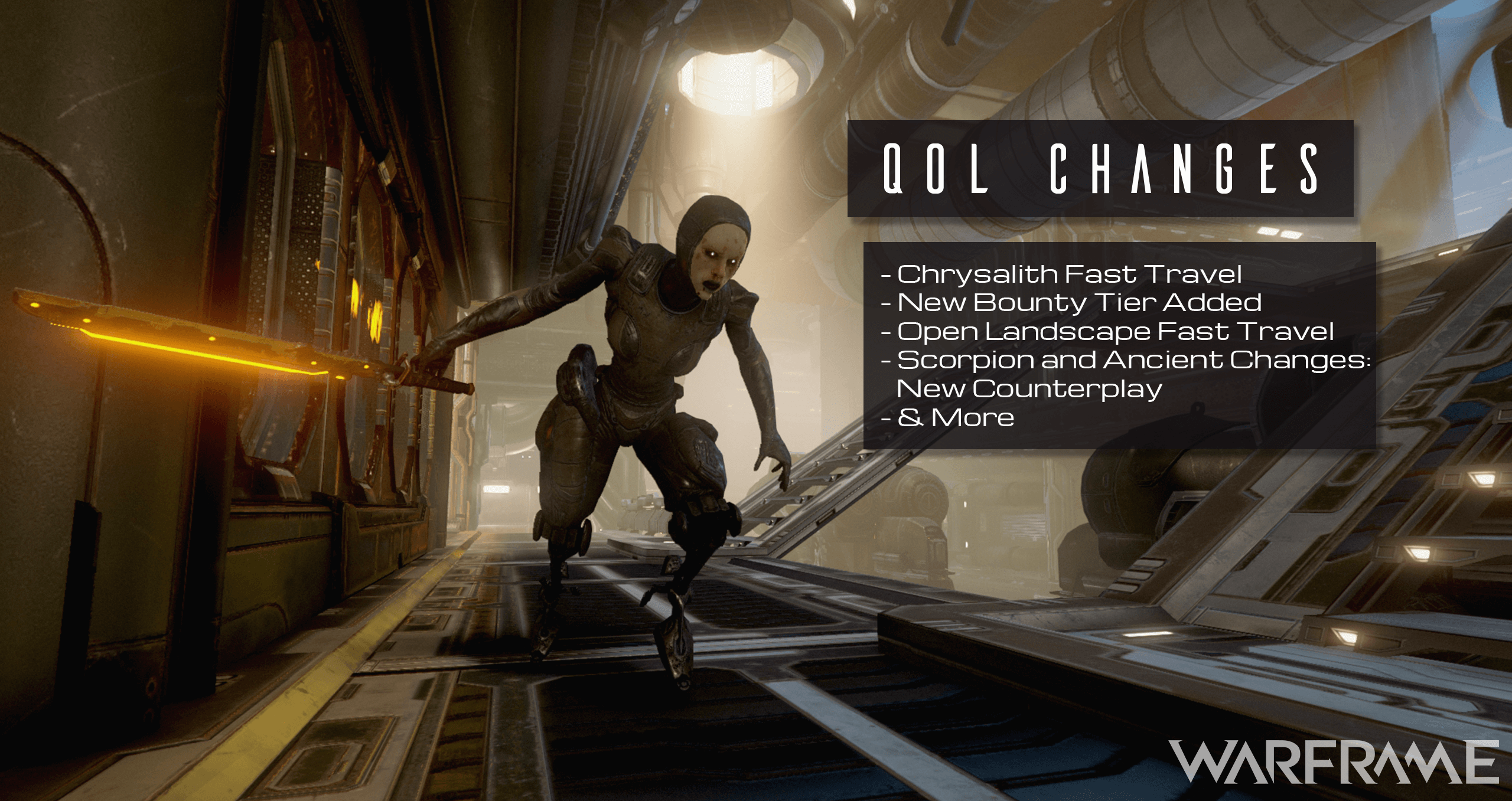 A fifth Bounty tier is being added to the Chrysalith. The fourth tier bounty’s rare drops have now been split, meaning the Hespar and Aeolak will be rare drops from different Bounty missions.
You will be able to trade resources for Voidplumes from Archimedian Yonta.
Thrax Mag Procs are changing to no longer drain players of their full energy. They will now only drain 50%!
Once accepting a bounty from Quinn, a portal to fast-travel to the Zariman Elevator will spawn! Great for those like me who are laz-- invested in speed running:
Changing “forced Operator” bubbles (Cascade + Kuva Trokarian) to not nullify powers.

We are adding the ability to fast travel in Open Landscapes (Plains of Eidolon, Orb Vallis, and Cambion Drift) using Blinkpads! These are strategically placed around key landmarks in these worlds to help you get to where you want to go -- only faster.

Players can travel to a Blinkpad when interacting with another Blinkpad, or by opening the Map in-mission.

Following the theme of counterplay added with the Eximus rework, we’ve revisited the mechanics of Scorpion and Infested Ancients to help players better escape their grasp.

When whipped and pulled towards these enemies, players will be able to roll or bullet jump to break free -- or, in classic mobile game fashion, they can cut the rope!

The Defense mission total waves are reduced from 15 to 10
The missions’ level range has been lowered to Level 25-30.
Eximus enemies will no longer spawn in at a level higher than the intended mission level range. This is a change that applies game-wide as well.

Here’s a look at other changes and content that are in the works, but do not have an explicit release timeline. Do not expect these with Echoes of the Zariman on June 9th!

We’re finally ready to announce Round 22 of TennoGen! Check out the full list below in our forum post, or the showcase in the highlight below:

We’re adjusting the values of older Arcanes with the goal of making lower rank Arcanes more viable. In short, there are three stats that each Arcane tends to have (speaking generally here) -- for example, a percentage chance, a stat buff, and the duration of the buff.

Certain Arcanes on the live build increase all of these stats per rank, but we are changing it so that only one stat is affected by rank. The other two stats will now be at the max-rank value regardless of the Arcane Rank, thereby buffing lower-rank Arcanes as a result.

This change only affects mostly older Arcanes -- Pablo mentioned 40+ are getting this treatment -- as the majority of newer Arcanes already follow this system.

We’re making database changes to Veiled Rivens with the goal of increasing the amount of Rivens players can own. This is similar to how the Wreckage changes work, where your Veiled Riven would not show the challenge until it is equipped onto a weapon. This way, Veiled Rivens (that do not have a challenge active) would not take up slots in the player’s inventory.

We are in very early stages of this discussion, and have other problems to solve with this new system before it can be released, but this should be positive news for Riven hunters!

You can listen to Pablo go a little more into technical details below:

As a result, this second batch has been split into two. We are releasing the next wave from L to S -- a total of 18 Augments -- and the following S - Z changes in future updates.

We did not reveal Void Angels until after the Angels of the Zariman update went live, so we wanted to give you a behind-the-scenes look at how these were concepted and how they evolved.

Much of the inspiration behind the Angel’s visual design came from the incredible layout art for the tilesets themselves, as revealed by the team!

Here is also a look at the Void Plume concepts, with Excalibanana for scale:

Steve spoke about some landscape upgrades that are being integrated into existing Open Worlds. The changes allow for more textural detail to be seen from afar, due to adjustments in how our Sky and Lightmaps work in these environments.

Steve spoke a little bit about some Crossplay development progress, where the team is working on changing all the chat backend so that per-platform markers can be associated to players. This is only a tiny snippet of the work that our team is investing into infrastructure changes and more, but fun to receive updates nonetheless!


Operator Skin Tones are usually only traditional “human” colours, but players are asking for the ability to go full (green) goblin mode following a bug that allows them to use other colour palettes for their Operator skintone. The team discussed adding a curated palette of non-traditional skintones to Operator customization, so perhaps your dream of a Shrek cosplay may be realized in the future, my dear reader.
We are looking into more slots for Operator Customization!


New Landing Craft in the works based off of ships found in the Zariman. Its Air Support ability will reveal all rare items within 100 metres when activated. Here’s what it looks like: