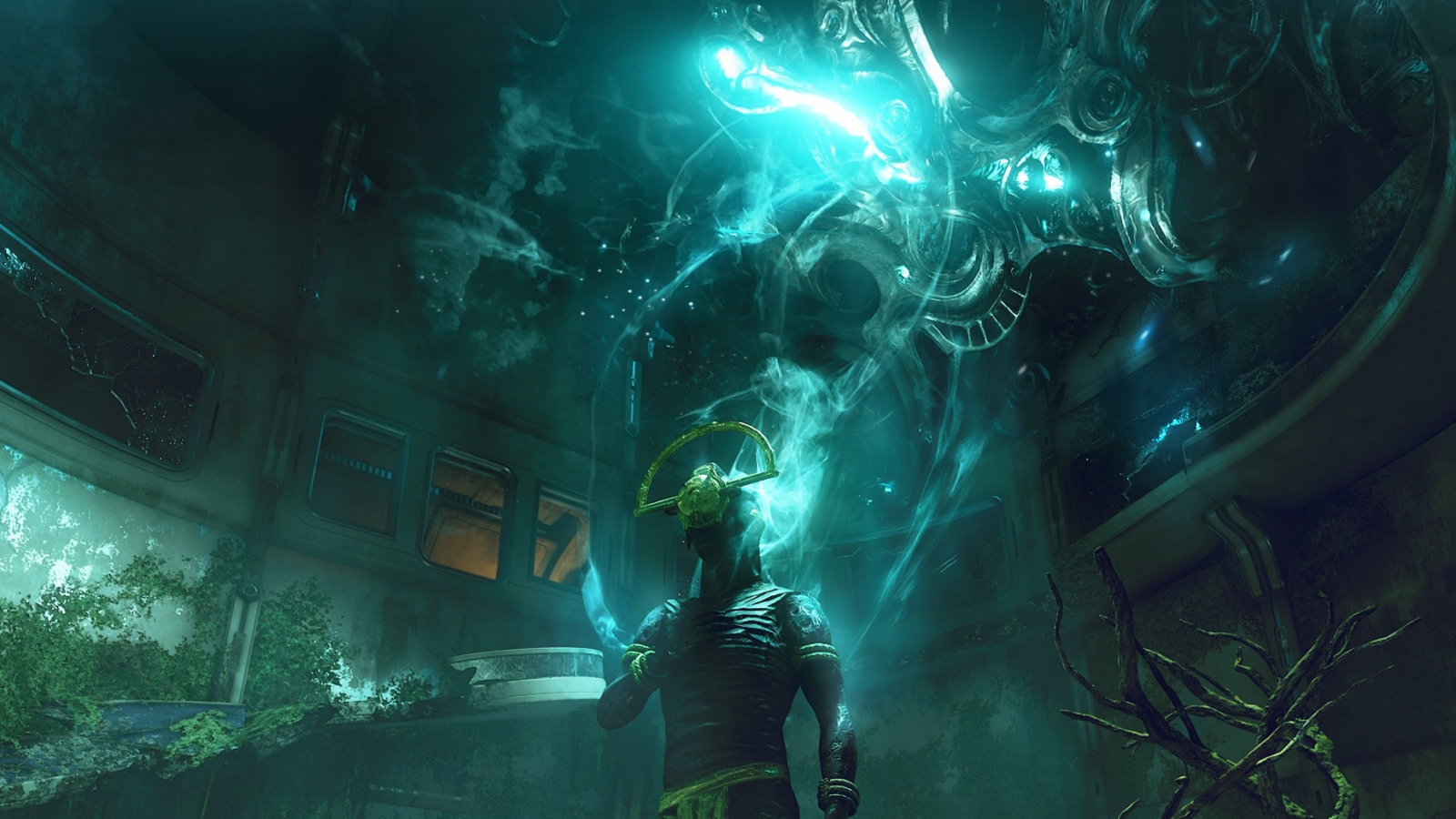 Our first Devstream of 2022 has come and gone, featuring a look back at The New War Quest, and a preview of what Tenno can expect in our post-New War world. For more details on the Lich & Sister of Parvos duplicate weapon changes, what to expect in our next Angels of the Zariman update, and more -- keep on reading!

This Devstream Overview will not contain spoilers for the New War, so if you’d like to see more reflections on the team’s experience making this Quest, you can listen here.

- Gift of the Lotus Alerts are live on all platforms for 24 hours after the stream! Log in to earn an Orokin Catalyst Blueprint and an Exilus Adapter Blueprint.
- Our Community Streams are being consolidated to one 2-hour Prime Time bonanza each week! Learn more here.
- Share your thoughts with us using the official 2022 Warframe Survey!
- TennoCon 2022 is officially a digital event. Expect more news later this year.
- Check out our 2021 Year in Review Stats page!

Before we dig deeper into the Devstream reveals, there are a few burning questions from the community that deserve a spot right at the top!

1. Cross-play and cross-save are in progress. This is a technical behemoth that we are actively working on but we will update you when we have more concrete details to share.
2. Characters from Act 1 of The New War may be making a re-appearance in the future!
3. Archons will be returning as a threat. (if you know, you know) 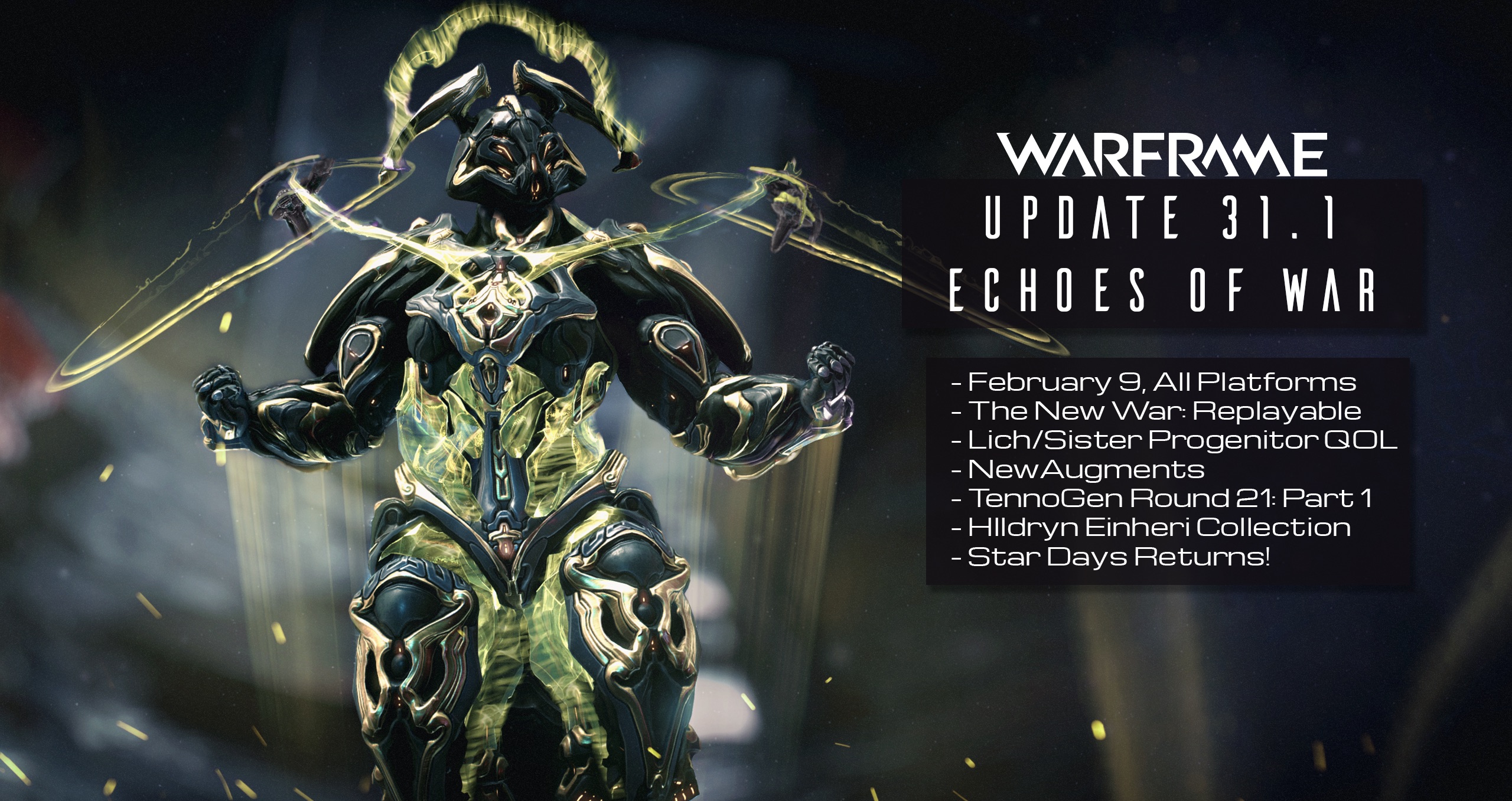 In the coming weeks, Tenno can expect the first update of the year, featuring some quality of life changes, new Augments, and new cosmetics! Echoes of War, Update 31.1, will be releasing on all platforms on February 9th. Here’s what you can look forward to:

You will be able to re-experience the New War with added replayability in this update! Additionally, Tenno will be able to scan new Somachord Tones in post-New War areas of the Star Chart to add three songs from this Quest to their Somachord. 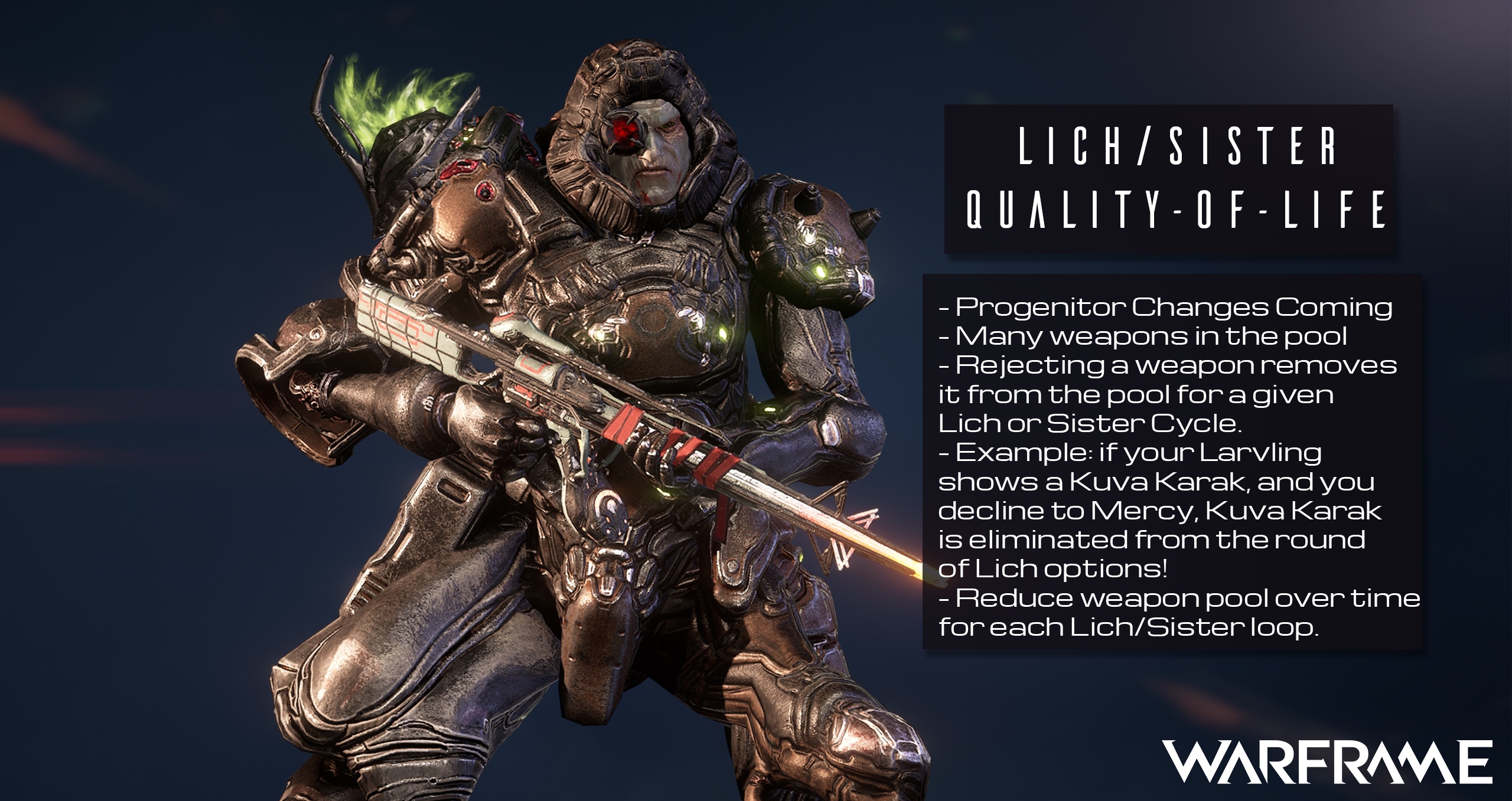 Weapon Spawning RNG changes are coming to the Lich and Sisters of Parvos systems. If you do not kill a Progenitor, the weapon it was offering will be removed from the spawning pool.. As an example: declining to mercy a Larvling with a Kuva Karak will mean that weapon option will not spawn again for this Lich cycle. Once you vanquish or convert your Lich/Sister, the weapon pool will reset.

The goal of this change is to overall reduce the amount of times you have to spawn Progenitors to get the weapon you are looking for!

Grendel: Gourmand: Feast
Instead of Energy, consumes 200 Health on cast and 30 Health Drain.

TennoGen Round 21 Release + Round 22 Deadline

Fashion Frame lovers can expect part one of Round 21 in our February 9th update, with the second half launching later in February on all platforms!

Tennogen artists themselves can look forward to the Round 22 Deadline on March 7th at 2pm ET. For full submission guidelines and details, check out the official announcement thread.

Star Days are returning to Fortuna! Visit Ticker to see new wares, and some updates to existing ones -- like voice lines added to Ticker’s Floof.

We are also adding Tennobaum items to these event offerings, as we were unable to host our Tennobaum celebrations in 2021. Expect a special stream in February with a donation to our charity of choice to carry on the Tennobaum spirit until it returns at the end of this year!

Hildryn is taking to the skies with a new look: the Hildryn Einheri Collection! Here’s a peek of what it looks like in-game:

Improvements to our enhanced mode are coming! Enhanced graphics users can see a significant change in metal textures, and more! We do intend to shift completely to the enhanced renderer, so stay tuned on news on that.

Additionally, we are improving our scripting system to be faster, which should benefit those with less beefy CPUs especially! Changes to our compiler might result in a bit of a bigger download in this February update, however.

Here’s a before/after of script changes: 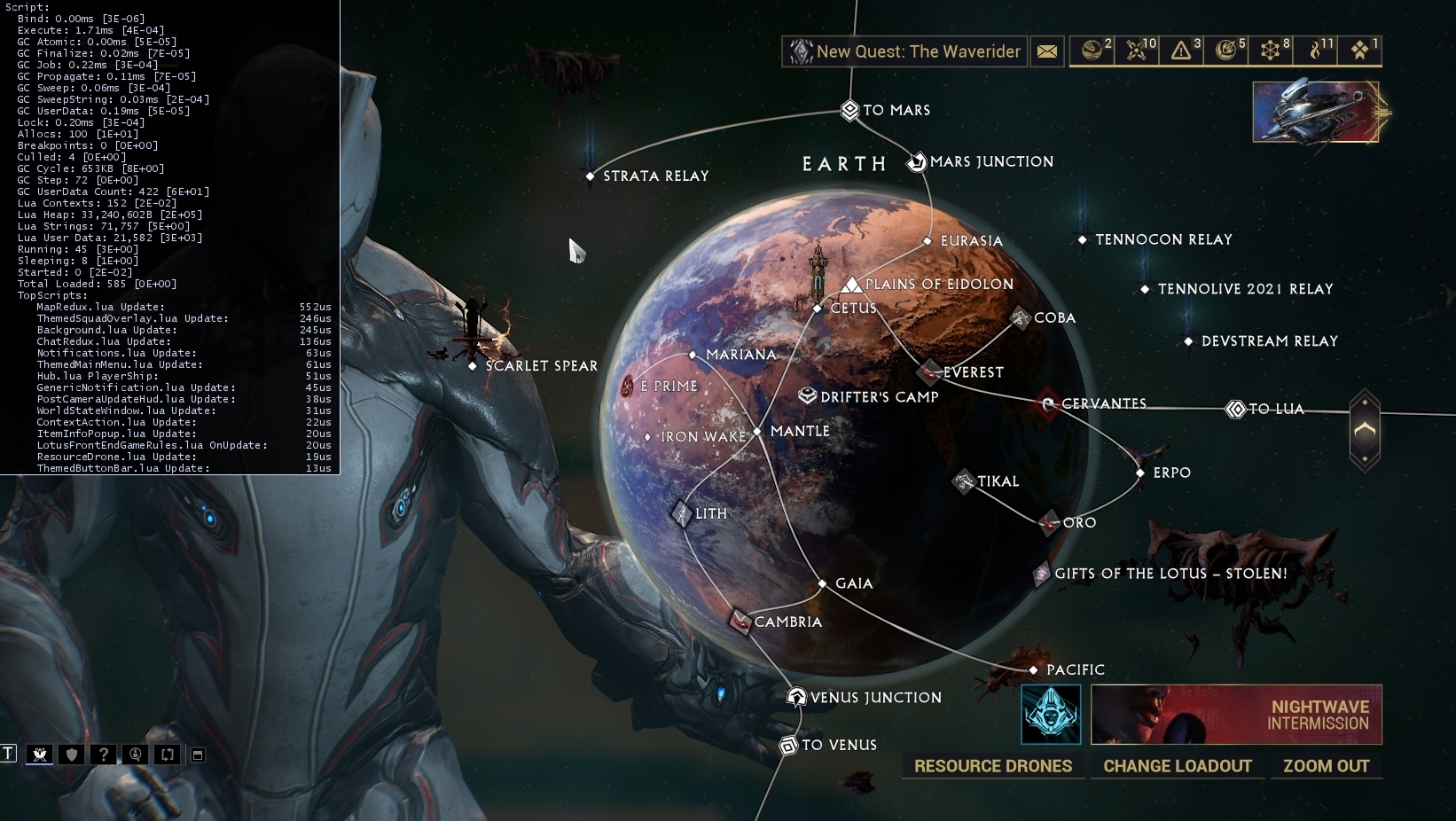 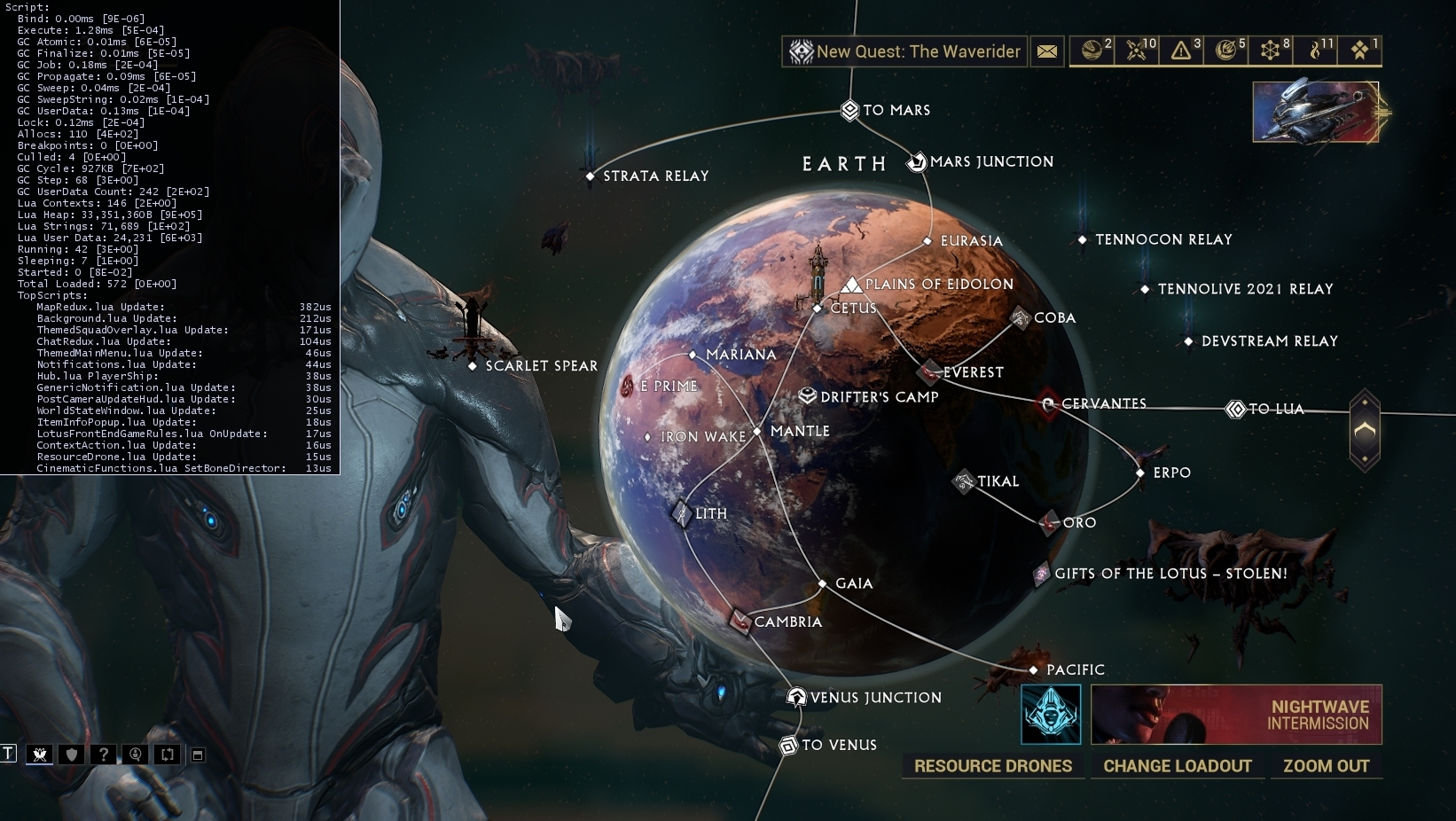 - Specific Accessibility Menu in your settings, allowing you to easily find accessibility settings, like colorblind pre-sets, and more.

Update 31.5: Angels of the Zariman 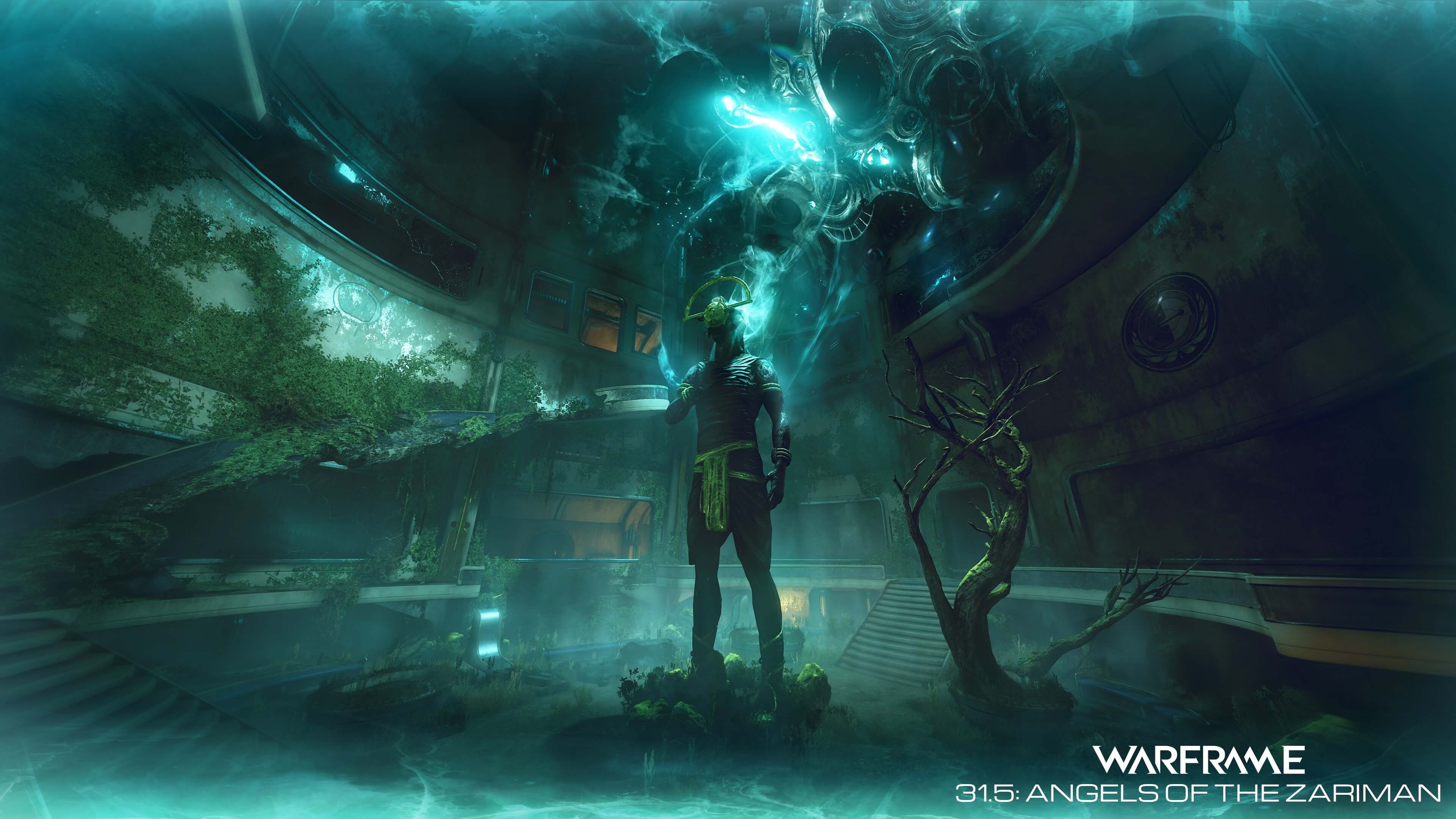 Our next major content update is a direct post-New War expansion aiming for release in early Spring! We are hoping to bring players two new game modes, a post-New War Quest, and a new Warframe -- in addition to a deeper dive into lore!

In this update, you will also see some quality of life reworks. Expect more details in our February Devstream, but here’s a quick overview of what to expect: 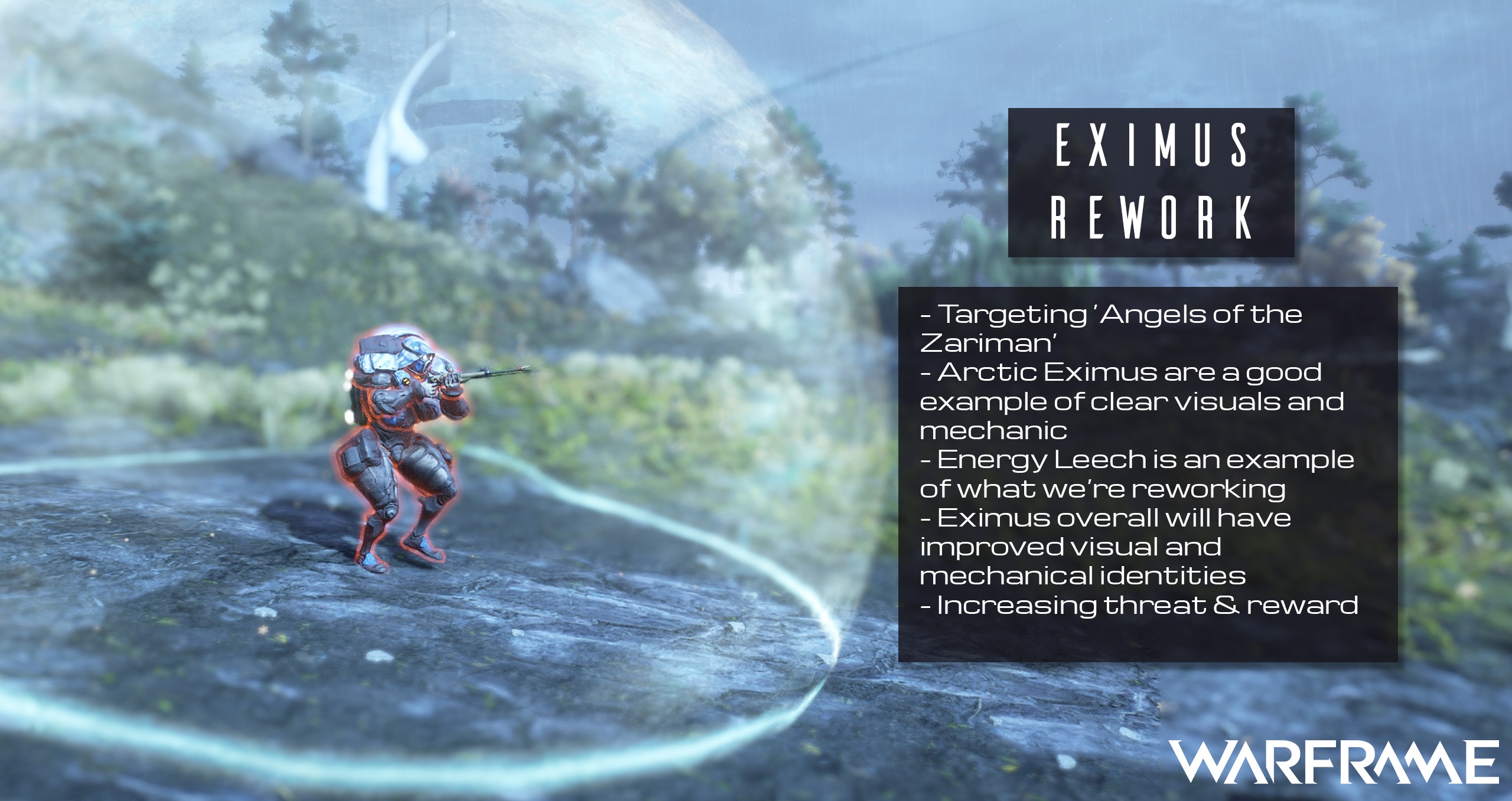 Giving each Eximus a clear visual identity to ensure that players understand how and why they are affecting your gameplay.

We’re intending to address many of the long-term thoughts and concerns players have had with these kinds of enemies! An Arctic Eximus is a good example of clear visuals and mechanics. An Energy Leech Eximus is an example of an enemy we are hoping to revisit, with their invisible draining auras.

Eximus can be a means to add variety to regular gameplay pacing. Expect a higher time-to-kill with these foes, but better rewards for the effort!

Again, this is more of a statement of intent vs exact implementation, so look forward to more details in our February Devstream.

We’ll be reviewing at least 16 lesser-used Augments for this update. Stay tuned for more news on that!

Valkyr’s next Deluxe Skin is shaping up nicely, and you can expect it in this major content drop! With her new look, you can also look forward to custom animations done by Elyse on our animation team, that elevates Valkyr’s aesthetic:

Designed by the amazing Liger-Inuzuka, here’s a first look at Xaku’s Deluxe Skin: 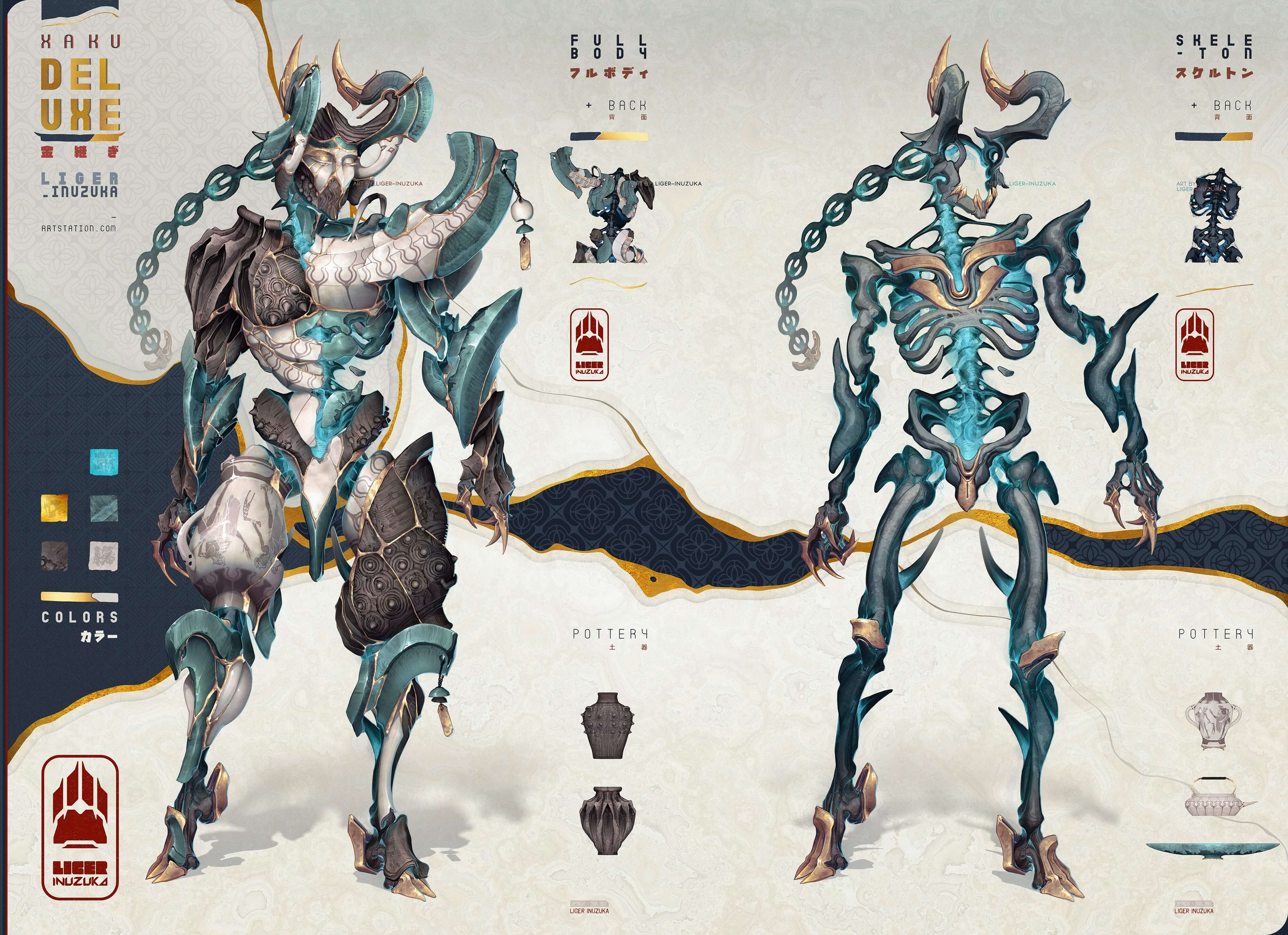 Players will be able to have different coloured eyes for the full anime aesthetic:

We are looking into making Operator suits compatible with its New War counterpart, but need to revisit our tech on how to approach this problem. The ultimate goal is total compatibility. 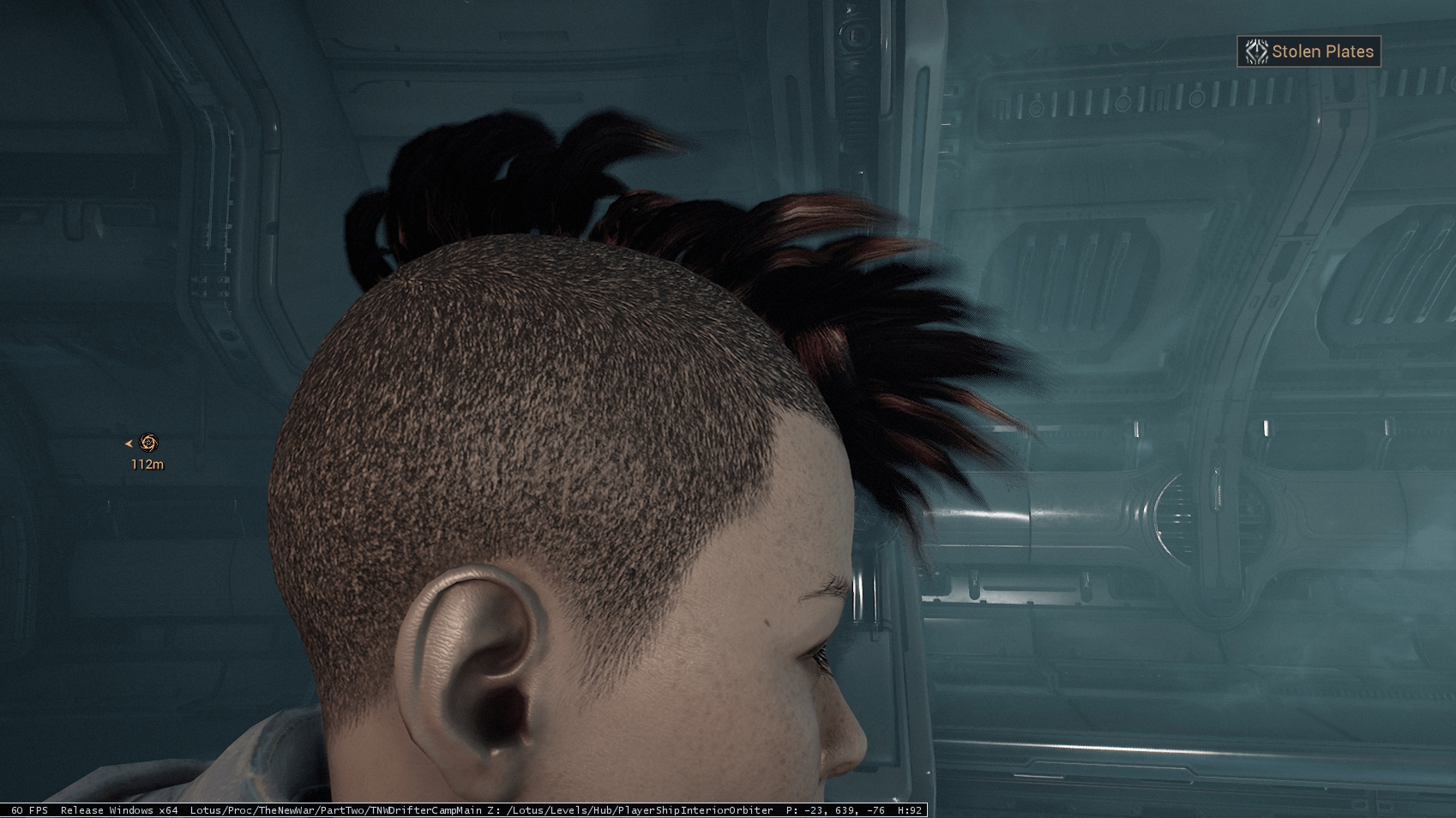 Hair tech improvements are in the works! Additionally, the team discussed exploring different hair customization options in the future. If you know, you know! 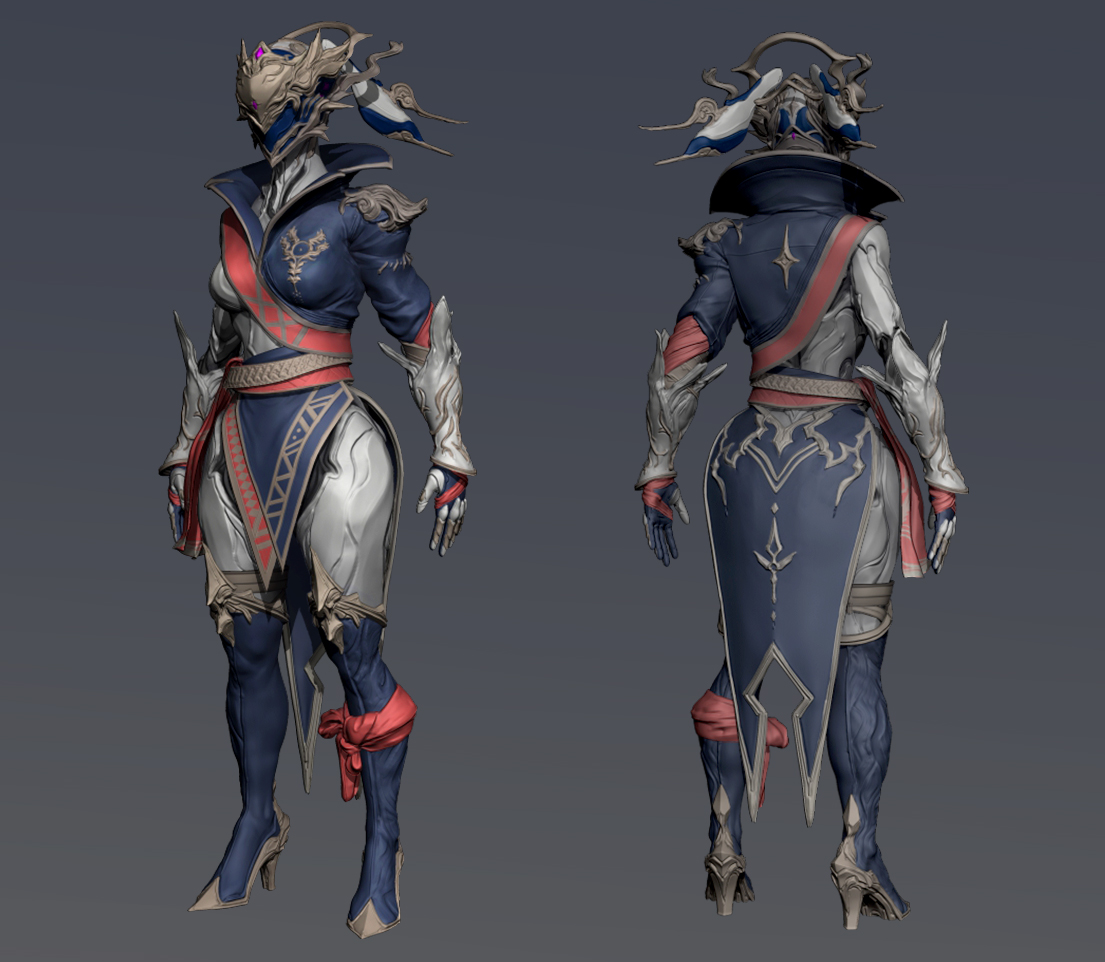 Concepted by community artist Asturisk, here’s a progress update on our Protea Deluxe Skin that we revealed at TennoCon!

Thanks for reading, Tenno!