Hi Tenno, welcome to our final Devstream overview for the year of 2021! As this stream is focused on all things New War, expect spoilers ahead -- tread lightly!

With that said, if you’re looking for a recap of everything discussed, keep on reading or watch the full stream in our YouTube link below:

Due to testing demands, the usual Gift of the Lotus alerts following our Devstreams are delayed until later in December! We’ll keep you all updated as to when to expect them.

Let’s just cut to the chase: Tenno can expect The New War to release on all platforms on December 15! If you haven’t seen it yet, the release date was announced in our newest cinematic trailer:

This the largest Quest we’ve ever made, which will take several hours to complete. For the sake of spoilers, we won’t say much more. But if you’re curious about what other content is coming with this update, here’s a peek:

Caliban — the next Warframe!

You might recognize the following Warframe from teasers at TennoCon 2021, but here’s an in-game look at Caliban, his Alt Helmet and his signature Weapon!

Expect to see his full Ability kit with The New War’s release! For now, catch a tease of his Ability to spawn Sentient allies (three of them, to be exact) in the clip above!

The edgiest Prime yet is releasing on December 15 with The New War — Harrow Prime!

Here’s a look at his Thurible Prime(TM) and Scourge Prime:

With this update, you will also see a few Quality of Life changes to Harrow’s kit!

Condemn
Radius growth now scales with Range.
Added a non-scaling area-of-effect around Harrow that gets hit by the Ability, similar to Protea’s Blaze Artillery, to address hitting enemies that are right on top of you.

Penance
Added an initial burst of healing based on sacrificed Shields that will appear on the reticle like it does for other Damage types.

Harrow and Harrow Prime now have the ‘Preparation’ Mod as a Passive, meaning Harrow now has more energy upon loading in!

We’re sharing some love for our Community Artists in this update as well, with two different Display collections!

The first is drawn by Kevin Glint, who created an incredible series of pieces inspired by the cinematic Quests thus-far. You will be able to obtain them in the “We Are Seasons” Pack in the Market for Platinum when The New War launches.

The second set showcases the talents of three other artists, in their depiction of some familiar faces from The New War demo: Veso, Kahl-175 and Teshin! Huge thank you to Karu, Casardis, and DatLoon for their amazing work. You will be able to obtain these three Displays in the Market for Platinum, and also from Twitch Drops following the update’s release!

Our Dojo enthusiasts can expect some Quest-related Dojo Decorations in this update -- but we won’t say much more as to not spoil the surprise! 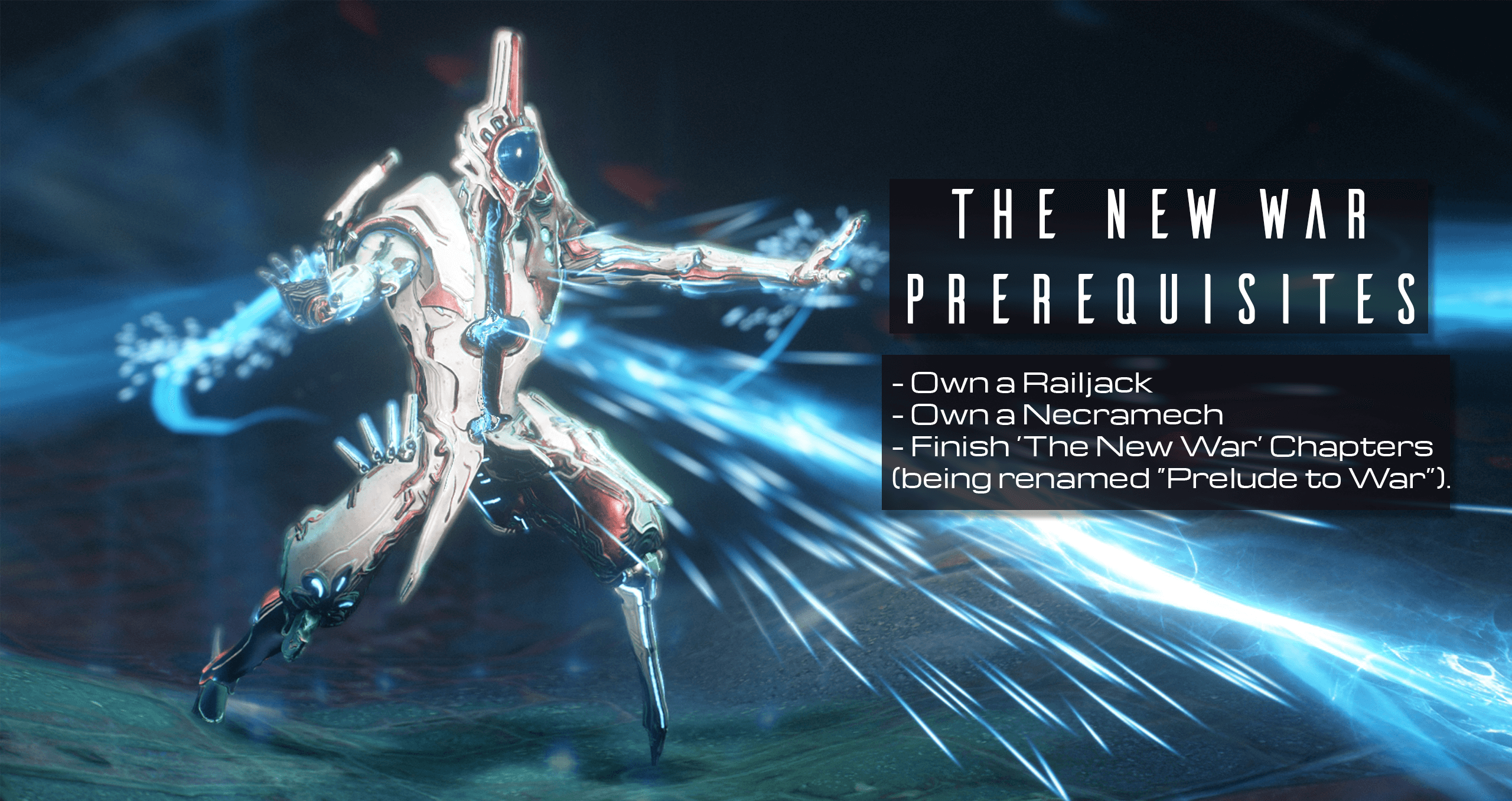 Make sure you’re ready for The New War by ensuring you a) own a Railjack, b) own a Necramech, and c) have completed “The New War” chapters! We’ve also released estimated update sizes so you can ensure you have the space to download:

In addition to those general prerequisites, the team mentioned a few other tips:

Make sure your Warframe and loadouts are ready to go! The Quest will not be replayable upon release, so make sure your Fashion Frame and Arsenal are up to snuff for your first playthrough.
Turn on ‘Creator Mode’ if you are streaming or recording. It won’t negatively affect your Quest experience, and will help you be extra prepared.
If your equipment can handle it, turn on Enhanced Rendering!

Upon starting the Quest, you will be given a commitment screen to help you understand what exactly you’re getting into -- so make sure you’ve looked over our tips above before diving in:

“Commit to THE NEW WAR?

The New War requires several hours to complete. You will be able to pause the game and your progress will be saved between Missions.

Prepare wisely. Loadout access will be limited and regular Warframe activities will not be available until this Quest is completed!

THE NEW WAR contains sequences of violence, frightening situations involving teens, and depictions of emotional abuse. It is intended for mature audiences.

Hmm. That didn’t work. Guess we’ll have to wait til December 15.