We’re back with our second Devstream of 2021, bringing a look at what to expect this spring for Warframe! From Railjack 3.0, to Update 30 and beyond, we’ll be recapping what was shared by our Devs.

This devstream was a mix of Q&A from content creators and community members, in addition to the regular content reveals / discussion. I’ll be blending in some of the questions for context if their answers aren’t related to the content revealed, but not all questions will be listed here.

If you want to listen to the full scope of the questions and the conversations that stemmed from them, definitely check out the full broadcast! If not, continue on to our overview below:

- The usual Gift of the Lotus Alerts are live on all Platforms for 24 hours after the stream! Log in and get your Orokin Catalyst BP and Rifle Riven Mod while they’re available.

- Octavia Prime is live on all platforms!

We will be working from home until at least September this year, meaning TennoCon 2021 will be a digital event. Full details to come! 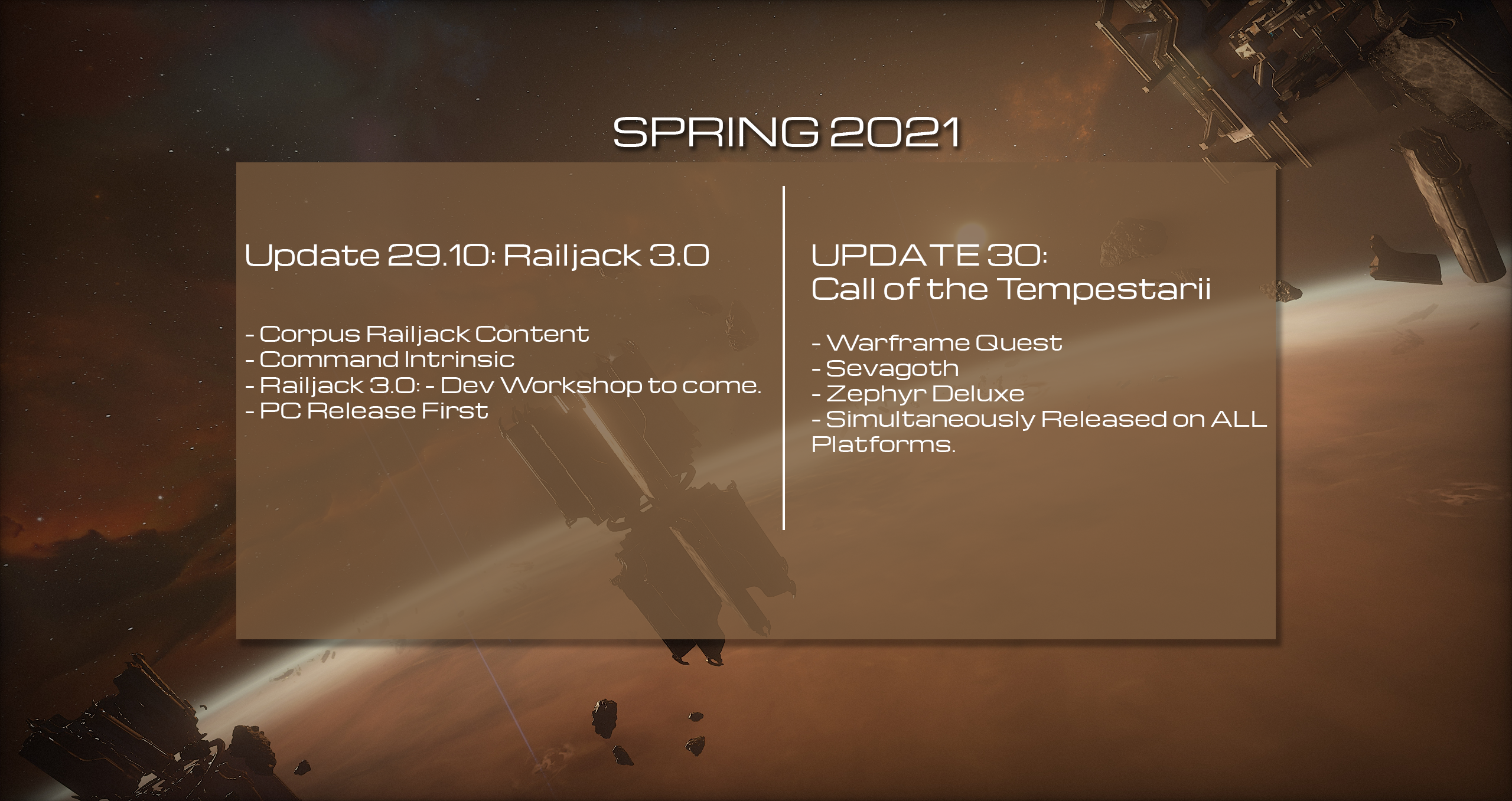 This Spring, you can expect two updates:

Update 30: Call of the Tempestarii simultaneously on all platforms! This update will include a Warfarme Quest, Sevagoth, Zephyr Deluxe and more.

We’ll dive more into what was discussed for each update below! 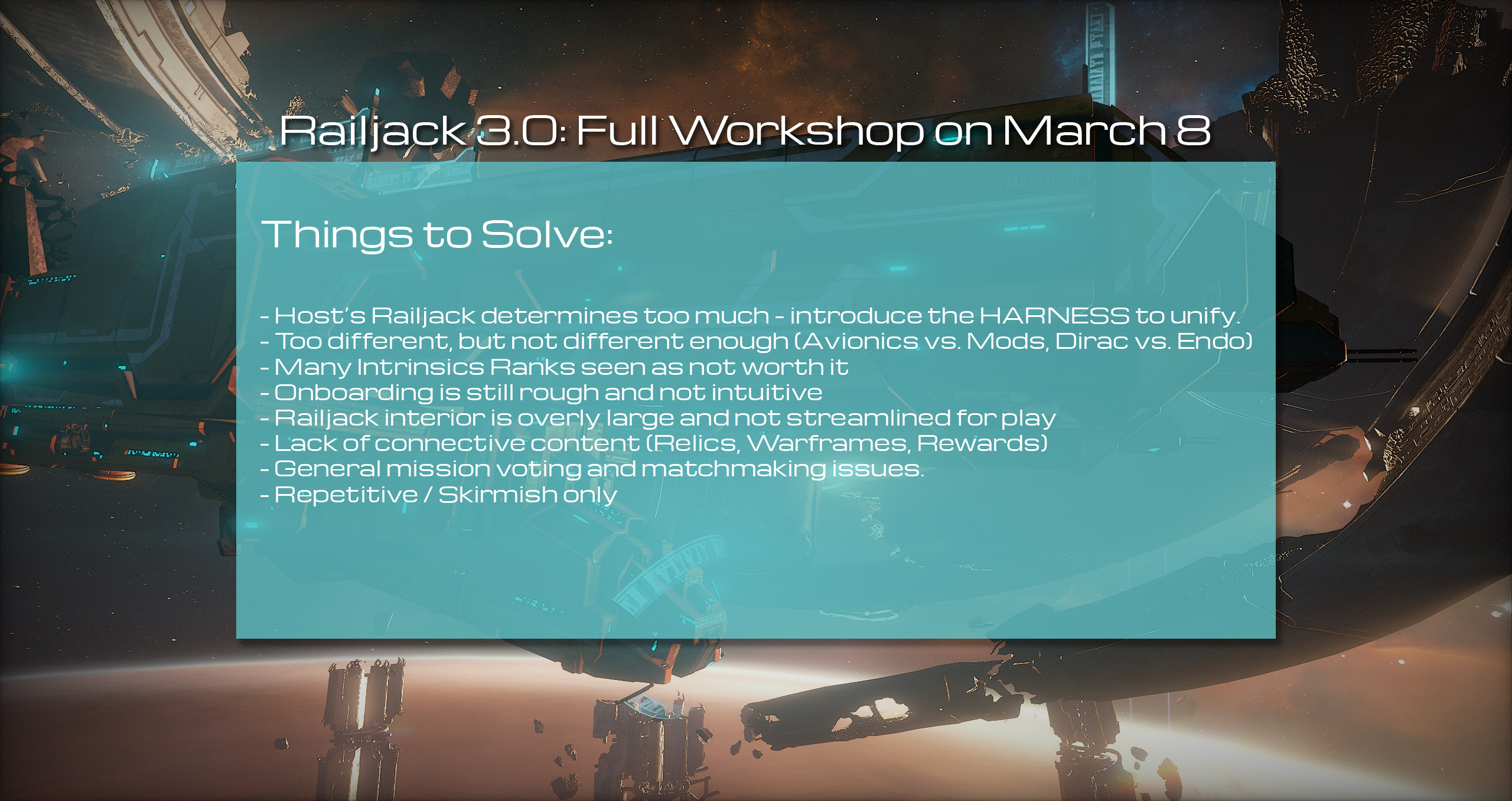 Railjack 3.0 is coming! In our last Devstream, we mentioned “surgery with a chainsaw” being applied to the Railjack system, and we officially have more details on what to expect. Overall, our approach is to fix the mistakes we have made and add more connection to the rest of the game.

This is a short overview of what is coming, expect a full rundown in a Dev Workshop on March 8th!

The host’s Railjack determines too much -- soon players will be able to bring their own Avionics with them, allowing for them to carry their hard work put into progressing their Railjack into any Railjack mission. Host Railjacks will still determine the customization and equipment, but Avionics will be your own: 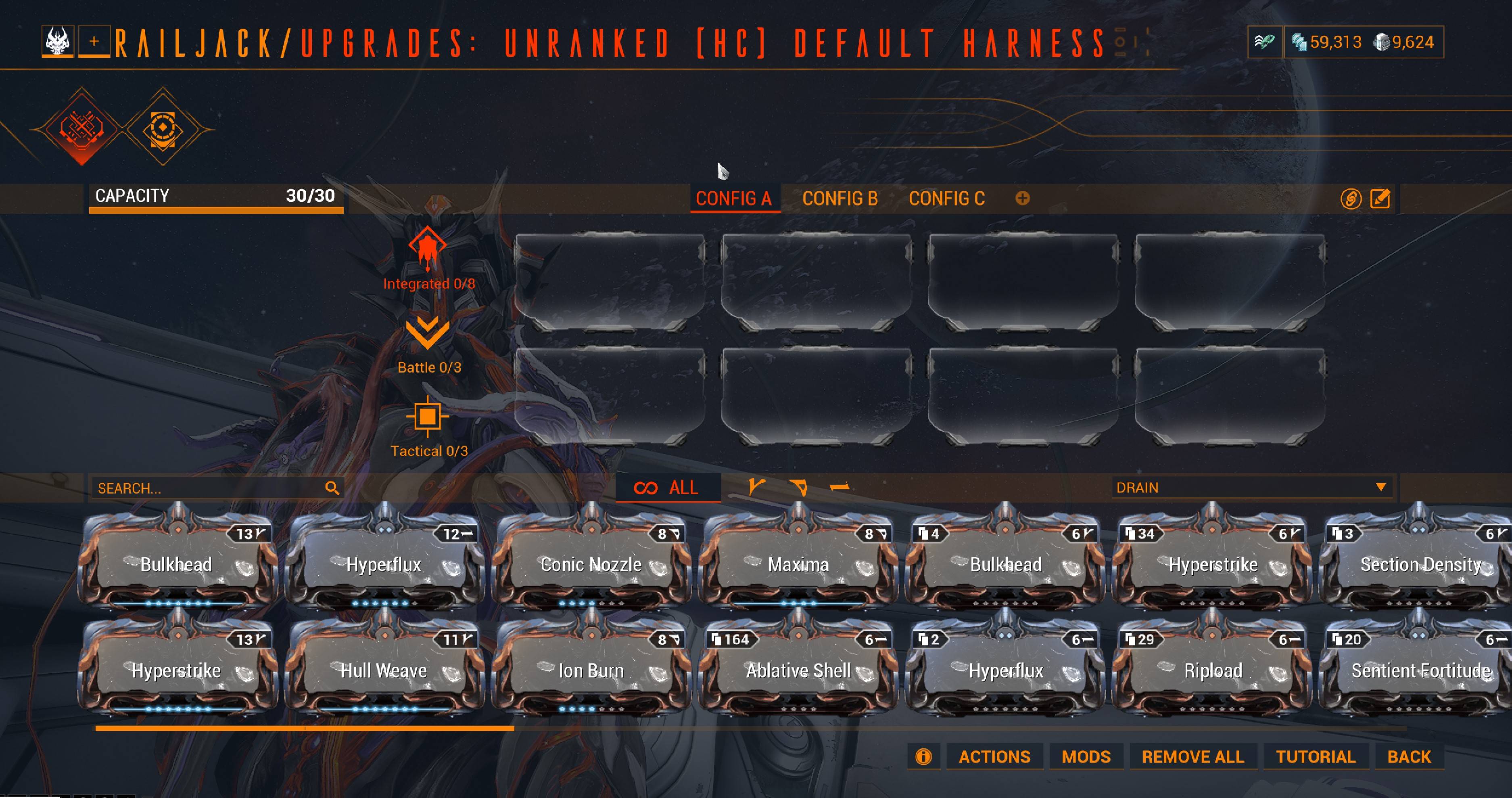 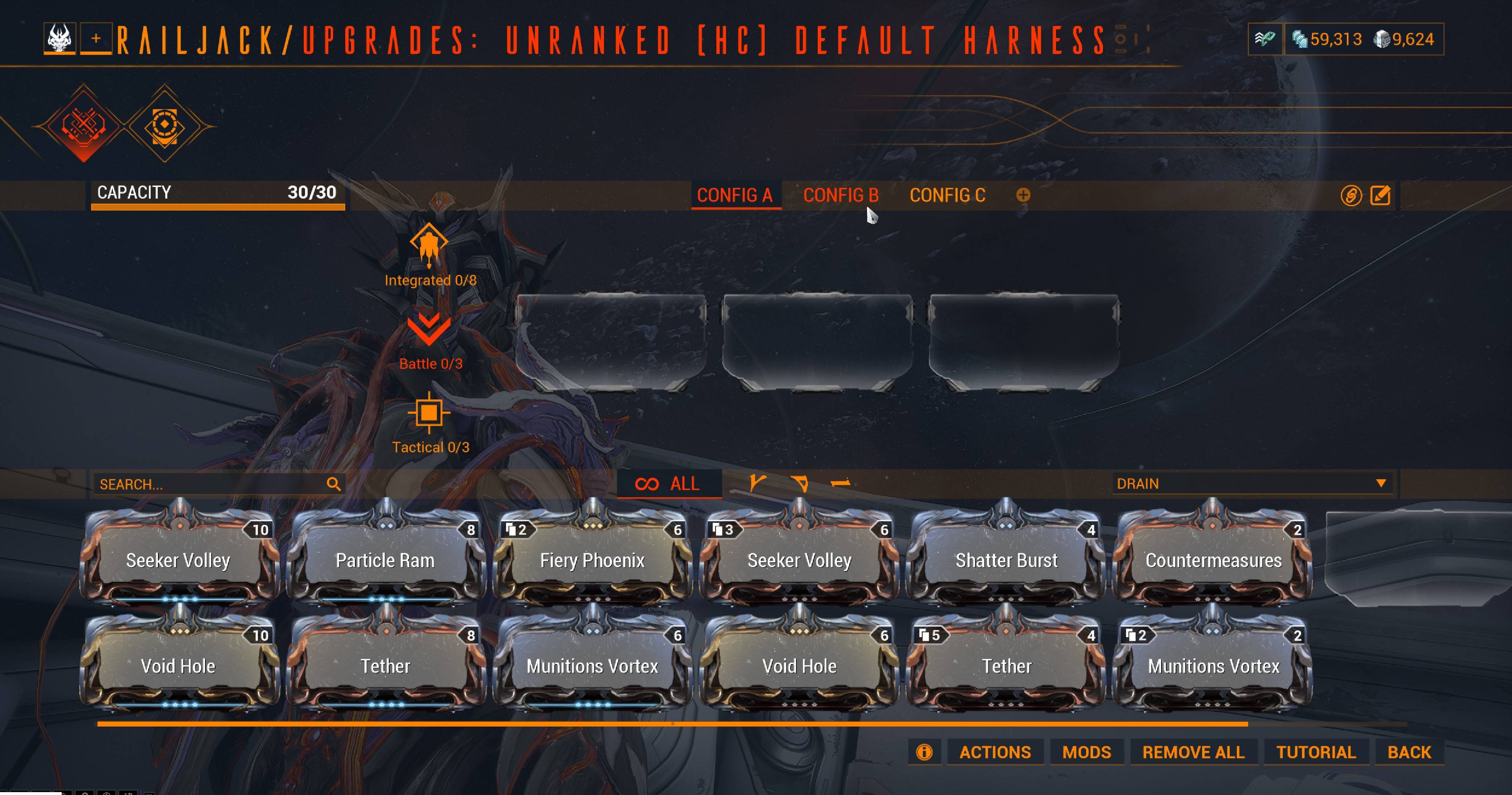 We’ve seen from many Tenno that certain Intrinsic Ranks are not worth the time investment, so we are rebalancing them and improving them -- one example Scott mentioned was an Intrinsic that allowed you to summon your Mech in-mission. You will be able to respec your Intrinsics on this release!

We are adding more connective tissue between core Warframe and Railjack to make it an extension of your Warframe experience. Some of these changes include:

- The ability to unlock Relics in Void Storms
- Certain Vaulted Primes having their Relics available in Railjack missions
- Ash moving from Manics to Railjack.
- Orphix Venom in Railjack with Arcane rewards, as an alternative to Eidolons! 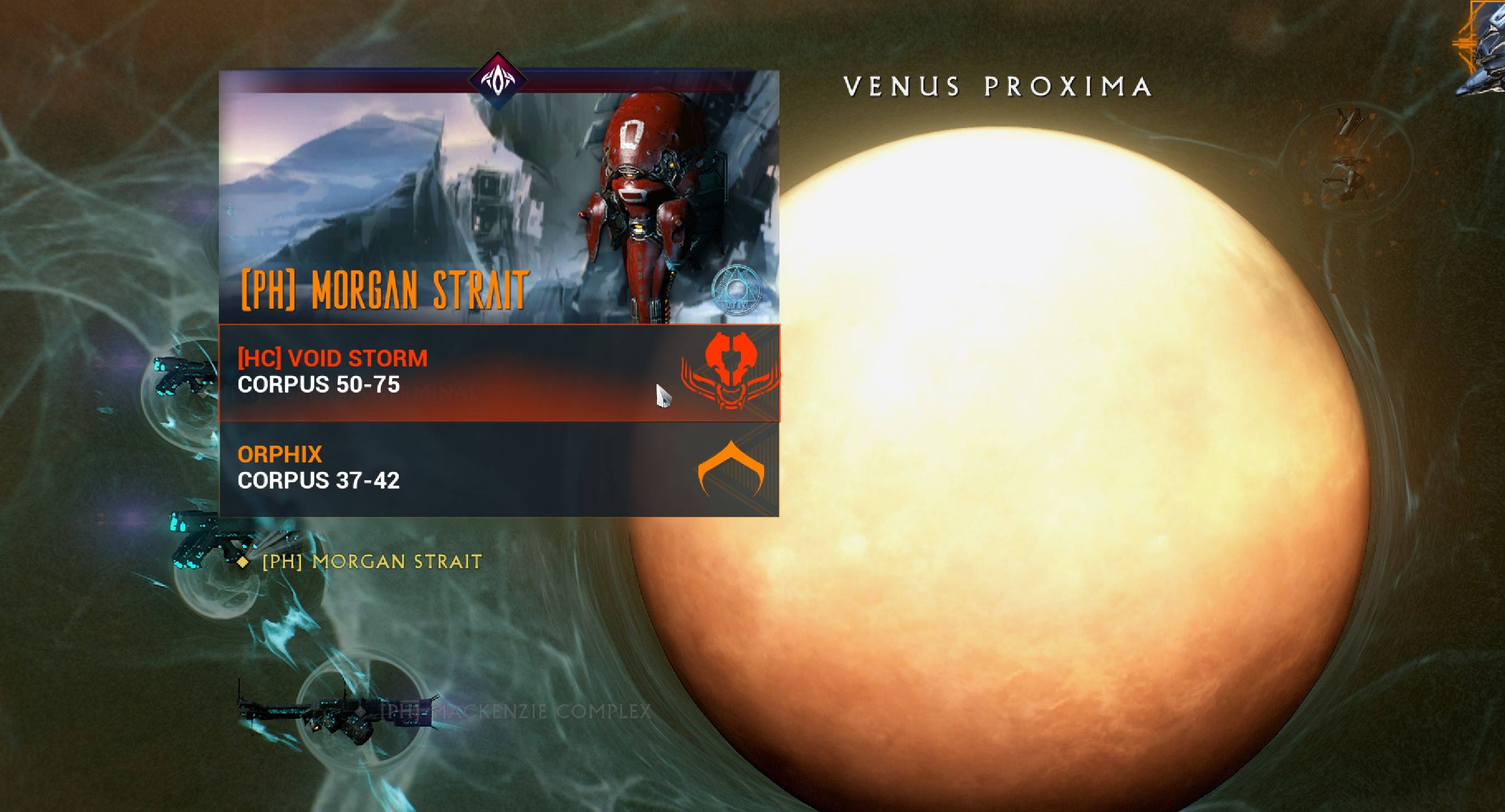 - We are “renovating” the interior of Railjacks to be better suited for Warframe gameplay.

This and more will be explained in our Dev Workshop on March 8th!

As indicated, this update will be releasing on all 4 platforms simultaneously. With it is coming Sevagoth, and his Quest. The team chatted a bit more about Sevagoth especially, which we’ll include below:

Sevagoth comes with two Exalted weapons: his Shadow, and his Shadow’s Claws. You can customize and mod his Shadow separately from Sevagoth himself!

His Signature weapon is a wrist-mounted sidearm that gives him enhanced damage on headshots! It has two fire modes:
- Quick tap that is perfect for headshots
- Charge shot that slows enemies with a cold proc!

Here’s a look at his Shadow, including new custom dodges and a custom camera angle due to his size:

Finally, here’s a look at his Agile animation, which Rebecca was suspiciously excited for:

We also had questions about his subsumable ability: it will be his 3rd, Gloom!

We have even more to show for the Ghoul Saw! Here are some GIFs of more combos from this new weapon type:

Guns versus Melee! Is there any plans to bring the damage of primary and secondary weapons up in line with Our melee scaling to balance things out or are you happy with the current gulf between our weapons.

We are aware of the current Melee meta and are exploring changes to bring our Primary and Secondary weapons closer in power to Melee.

Part of this exploration involves new mods for Primary and Secondary weapons, in addition to bonuses that incentivize Tenno to use more of their equipment: do more damage with your Primary after hitting an enemy with your melee, as an example.

Another aspect of these changes are tweaks to Melees to maintain the Warframe power fantasy, but add more danger back to gameplay. Currently every melee hit is a stagger/stun, offering free CC not seen in gunplay. There was also discussion of adjusting the speed at which you can swing your melee weapon.

Overall, the goal is not to nerf melee -- we have aspects of it we want to tweak, but the majority of our focus is on bringing guns up to its power level!

Nothing is set in stone currently, so keep an eye out for a Dev Workshop that goes into more concrete details on our plans.

Is there any chance in future that the Steel path reward vendor could be revisited? If I could play steel path to farm up as many umbra forma as I want I would play it non-stop until I have all the umbra forma I want, but because I need to wait 8 weeks a time to get one umbra forma the grind isn't appealing enough for me personally.

After our next update, we’ll be revisiting rewards in various places, including in the Steel Path!

Open worlds have seen a lot of advancement in terms of overall quality since Plains of Eidolon through story and reward structure but tend to have objectives that boil down to "mobile defense" in many cases especially for bounties. Is there a want to lean towards more active objectives in the future or is defense core to overall design in open worlds?

There is a huge desire to evolve that and Expand on open world gameplay. We are looking at more active and/or diverse gameplay. There is a new gamemode in Railjack that might reflect this, but we are also looking to revitalize old gamemodes and make them fresh.

Because of the player's power and damage being so high and fairly easy to output from an execution standpoint, is there a plan to focus on other forms of difficult content? Something similar to the old raids, an 8 person mission split between a Railjack and Ground squad (Scarlet Spear), etc?

We are focusing much of our Boss design on mechanical difficulty in lieu of straight up gear checks. Making the game more difficult beyond gear is something we’re always looking for.

With that said, we are exploring the possibility of Trials returning with the 3rd Orb Mother.

- Level designers are working on waypoint issues! The process is being automated: waypoint utopia is coming.
- Locking stats in Rivens is not something being discussed at this point, as we are focused on what is coming in Spring 2021.
- No more Umbra Warframes are in development at this point. Definitely something possible in the future.
- Pets 2.0 is still being worked on! Corpus Queenpins are coming with new companions, so perhaps then -- no promises though!
- Captura Improvements are something we are interested in working on, but the team is currently focused on other content.
- Sprag/Ven’kra refresh is finished on the Art side, it’s a matter of finding time to implement it into gameplay!
- Cross-Progression is a request we are very much aware of! We don’t have anything to announce at this time, but you are heard and seen.
- We think adding the ability to move Sigils more on the body and change their size more would be cool!