We’re back with potentially the last Devstream before Fortuna’s launch, and we came with a lot to share! As always, you can watch the full stream to learn all the details, or you can read our top-level recap of what was discussed/revealed in our overview below:

• Don’t miss the two 24-hour Gift of the Lotus Alerts after the stream!
• Warframe launches on Nintendo Switch on November 20!
• The Hallowed Nightmares Tactical Alert is now live until November 1!
• We hope to see you at our TennoVIP events at Paris Games Week and at TwitchCon next weekend!
• Pre-order your own Excalibur Umbra statue here

Let’s get the most burning question out of the way now: Fortuna when??? Well – we officially have an answer: we are hoping to launch this update during the first week of November! As a general reminder, this does not include Railjack; that content will come at a later date.

Here’s a quick recap of what else was revealed for Fortuna during the stream:

• Caves will have many purposes, including but not limited to: the ability to fish in them, mine, and have K-Drive races pass through them.
• There are new Bounty types for Fortuna! One example shown on-stream was having to kill a certain type of enemy, however and wherever you’d like.
• K-Drives will come with their own mods!
• Fortuna fishing comes with new spears and a new mechanic. Instead of just impaling them, you’ll need to aim your EMP spear at an area marked on the fish to disable it. You’ll need to time your throw to match a certain frequency, so both aim and timing will be required!
• No new Operator mechanics are coming with Fortuna, but new Operator Amps are!

Your first look at the next Warframe is officially here! We’re trying to avoid categorizing her, but Geoff described her as the contrast to Valkyr in that she’s “elegant and refined” (sorry Megan). Descriptions are nice and all, but let’s take a look at what she can do:

PASSIVE: The lower her health, the more damage she does.

ONE: Cast upon an enemy to tear them apart with your claws. Doing so summons a shield in front of you to protect you, for a set duration. Additionally, you harvest their blood that can the charged by draining your energy and thrown at enemies to do damage.

TWO: Cast upon an enemy to impale them, creating an AOE that drains their life force to heal you.

THREE: Cast to lower your health, giving you energy based on the amount of health drained.

FOUR: Summon a flurry of blades around you, pulling in enemies and shredding them. You can move around while in the vortex.

She also comes with her own signature crossbow!

The new Moa pets coming with Fortuna are modular! You can customize 4 different components: the Heads, which determine the precepts of the Moa, the Core, the Gear, and the Brackets! Precepts can be used across all Moa heads, but you need to unlock each Head to get the Precepts! One example from the Devstream were the following Precepts given by the Para head:

• Deploy a tether mine.
• An attack that temporarily reverses gravity and does impact damage.

They also come with “Emotion Modules” that include their own voice lines, reactions, and animations to add more personality to your new Moa friend:

Here’s what your little buddy will look like when it follows you around:

For attacks, they use the Sentinel weapons you equip on them. You will also be able to use Vacuum on them. To help even the playing field for our equally cute beast companions, we will be introducing a new “Fetch” mod for them: 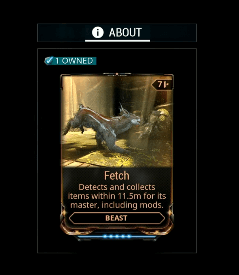 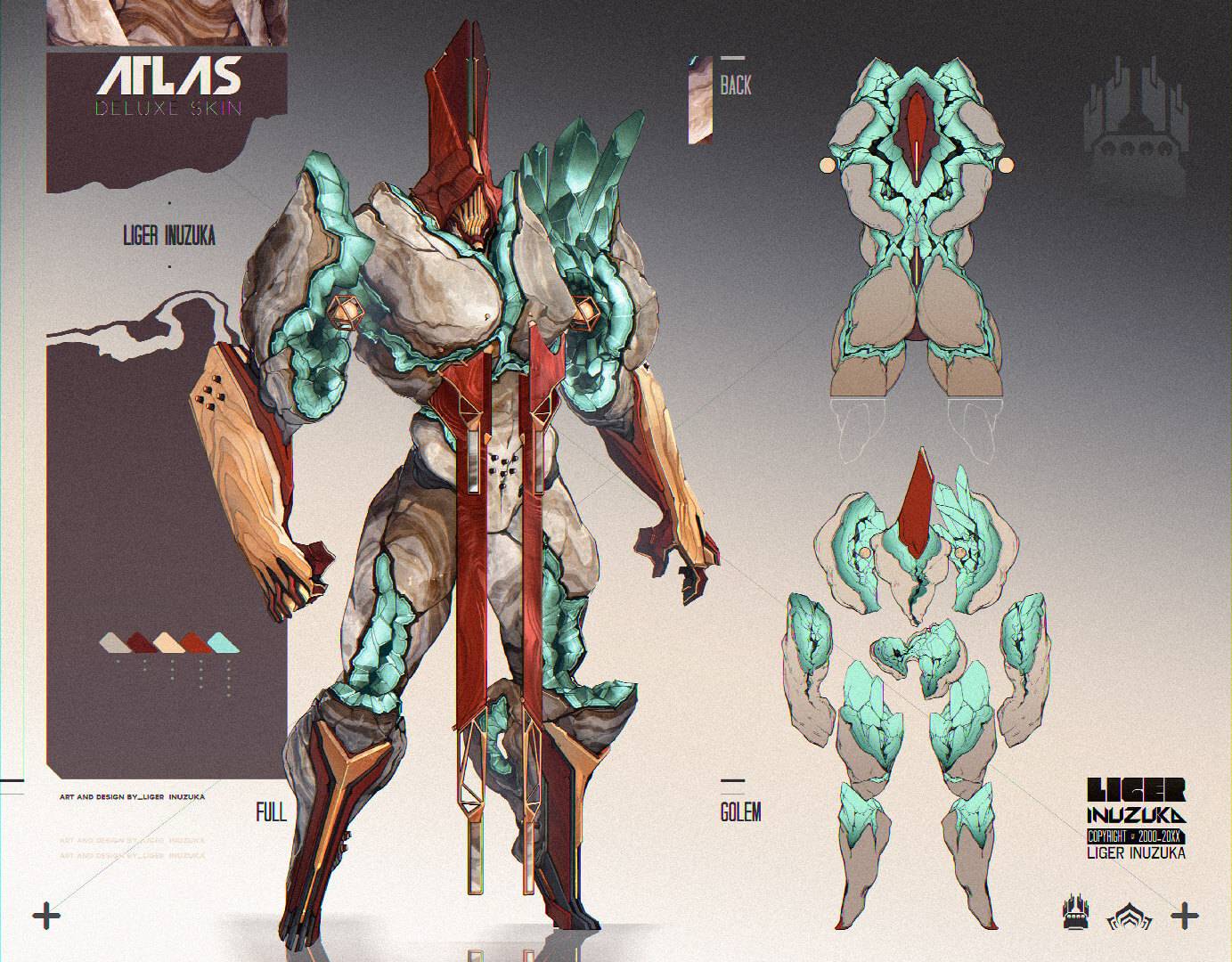 Designed by Liger-Inuzuka, the artist behind the Nezha and Nidus Deluxe skins!

Some significant changes to mining are coming! Instead of tracing a shape, you’ll have to heat an ore spot to the right temperature – this way it’s quicker and more skill-based! Depending on the ore, the cutter you use, and your skill level, you can even get multiple items from one mining spot.

Here’s a look at four new Operator Suits coming with Fortuna, all of which are work-in-progress. These feature the new seaming we added in the Chimera update. We have reverted the initial Chimera update seaming changes, but we will be working to polish those changes further and reintroduce them. The ultimate goal of these new seaming changes is to allow for better mix-and-matching of suit components.

Those of you waiting for new Operator hair will have to wait until later this year to receive it.
Finally, we are adding the ability to access your Focus schools in the Arsenal: 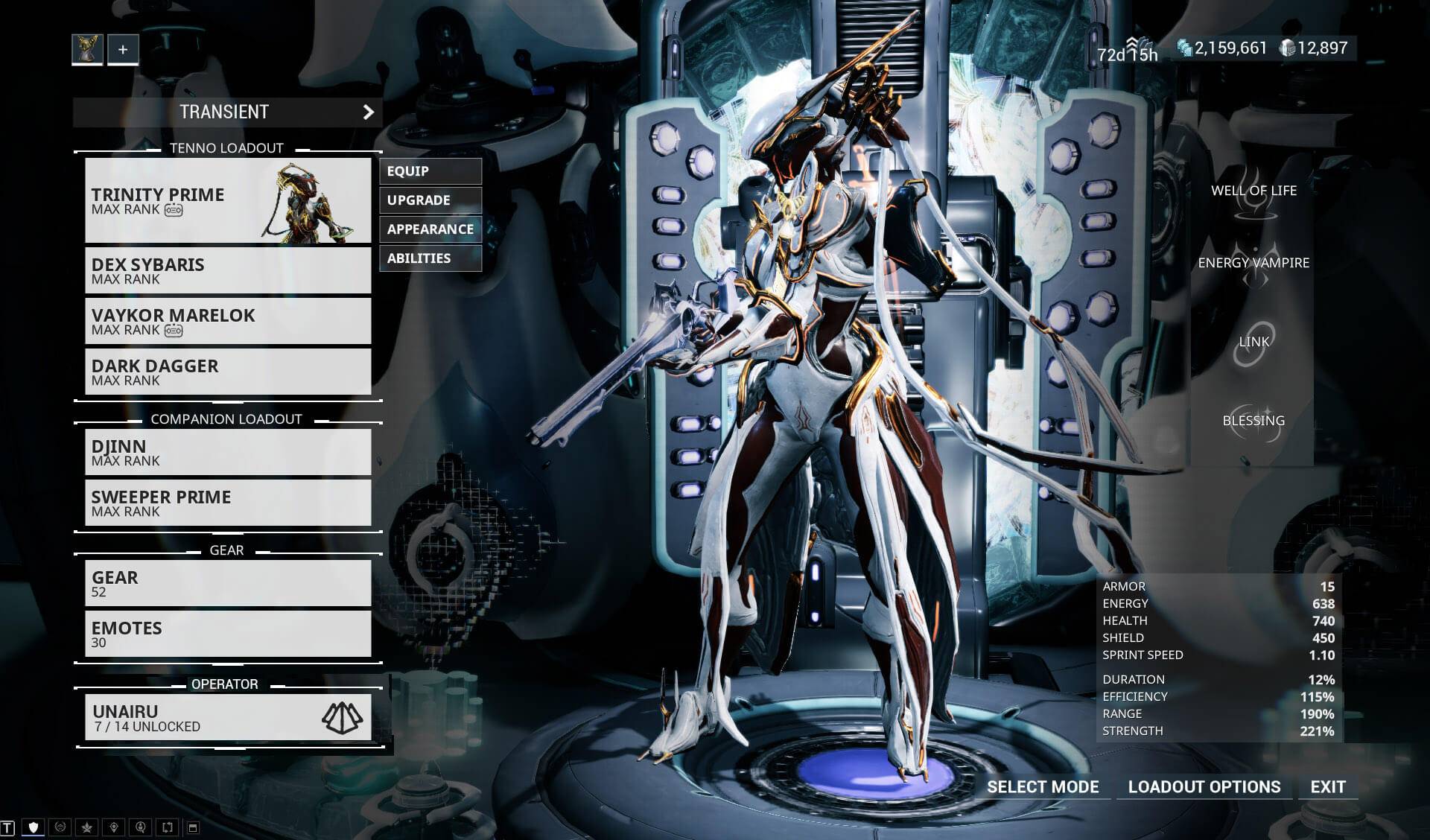 Titania Changes
• Tribute now only requires 1 target to maximize each buff.
• Lantern can be cast up to 4 times at once. Lanterned enemies can be detonated when the cast button is held down.
• Razorwing is getting a loot vacuum, similar to Archwing!

Nyx Changes
• NEW PASSIVE: Misfire -- enemies can't seem to truly target Nyx and all receive an accuracy debuff against her.
• MIND CONTROL: Target will absorb any damage done to it 4 seconds after cast. The amount of damage absorbed then increases the output damage of the target.
• PSYCHIC BOLTS: This ability is completely being redone. All enemies hit lose defenses (armor/shields) for a short duration. Infested units will be slowed, in addition to the deactivation of any infested auras.
• ABSORB: The math and potentially damage type is being changed. No other details outside of that!

Other Tibdits:
• The game optimizations PanicButton helped us with for the Nintendo Switch port went live on PC with the Chimera Update
• Gas City rework will be coming shortly after Fortuna.
• Hoping add all remaining Dual-Stat mods to Archwing.

A lot of patches have gone out on PC over the past week, so we’re here to give you a recap of important changes you might have missed:

• Added an ‘Auto Install’ button to the Ayatan Sculptures screen for Mastery Rank 10+ Tenno! This long requested feature allows you to auto install Stars from your Inventory to your Ayatan Sculpture with one-click.

• Added ability to swap your Mod loadout order and A B C Appearance order in the Arsenal! This is done by dragging and dropping each loadout slot into place.

• Reverted Operator Suit Mesh Changes introduced in Update 23.10.0 to restore Operator Suit Meshes to their pre-Update 23.10 state. A more careful re-release of the Operator Suit Mesh Changes will come at a later date.
• Improvements towards Vomvalysts spawning underground while fighting the Teralyst and Hydrolyst.
• Fixed Mask of the Revenant quest not progressing once you meet the prerequisites listed in the Codex. If you were affected by this bug, talking to Nakak in Cetus will allow you to progress.
• The Gear Spiral now restricts duplicate Gear items (Apothics, Stims), with the exception of Dragon Keys! The bug turned feature of ability to equip all Dragon Keys shall live to hobble another day!

With our Mainline update, we refactored the Locomotion system (which is the code that controls how AI find their way around the level) - primarily to allow us to have AI switch between different movement modes (eg walking & flying). These AI code changes have resulted in multiple scenarios of AI struggling to respect current level pathing, which are the issues being noticed post Update 23.10.0. Below are improvements to the new issues and investigation continues into other reports (Arbitration AI, etc):

• Fixed inability to defeat the Juggernaut due to no weakpoints opening.
• Fixed Lynx not engaging or reacting to players attacking it.
• Fixed Zura (Rathuum) not engaging players.
• Fixed Palladino not engaging enemies during the Chains of Harrow quest.
• Fixed Grineer Dropships immediately dropping passengers upon arrival in the Plains.