It’s been a while since we’ve been back on the couch, but we’ve brought a ton of content to make up for the short hiatus! Want more info about K-Drives, see new places on Orb Vallis, and so much more? You can catch all the details and gameplay in action during our full livestream (highly recommended if you just want to marvel at all the work put into Fortuna), or just read about the highlights below:

· Don’t miss the two Gift of the Lotus Alerts that are live for 24 hours after this stream!

· Warframe's Official Soundtrack and We All Lift Together will soon be available on all major streaming platforms (Spotify, iTunes, Google, Amazon, and more)!

You’ve been well-acquainted with the members of Solaris United from past streams, but it’s time to learn a little bit more about the Vent Kids. If you’re not in the know, the Vent Kids are the orphans of Fortuna who have gathered together and repurpose Corpus technology for their own very important cause: making K-Drives.

Here’s a peek at their hideout in the Twitch clip below. The posters you see on the walls double as deck art for your K-Drives.

To gain standing with them, you can either successfully complete tricks on your K-Drive in Fortuna, or complete time trial K-Drive races.

Each day, players can search for Boon and his gang in Vallis to partake in their Time Trial K-Drive races. These races challenge players to pass through all gates before the timer expires. In the clip below, you can see the race, as well as the Standing counter in the bottom right-hand corner as Reb completes each trick:

Our sound team also provided us some more videos of the audio work done for the Vent Kids and K-Drives specifically.

Here’s a clip of the production of the Vent Kids’ hangout music:

And the recording of sounds for the K-Drives themselves using a Tesla (thanks [DE]Dean – and Elon!):

You might have noticed the large structures at the various bases we have visited – well you can actually go inside! A lot of bounties and missions involve infiltrating these places, and working your way through a winding maze of vents to complete an objective.

In the clip above, you can see the new and improved Corpus buildings and more – Fortuna comes with a remaster of Corpus materials, some of the oldest things in-game! You will slowly see these new materials filter into other Corpus spaces following its release as well.

Another fun tidbit of trivia from Steve: the Corpus have fashioned a parabolic sun reflector that shows the time of day. The sun will perpetually be out, but depending on its position along the horizon, different ambience and mood will pass across Orb Vallis. This is a nice alternative to Venus’ actual day/night cycle (which is a 115 extra day wait in comparison to Earth’s).

“The Gang Searches for Poop”

There’s bonus Devstream footage of Reb spending 40 minutes looking for animals via the new conservation system. If you just want to see the final reveal of the new animal, you can see it (and hear the collective sighs of relief) in this clip:

Take a look at our Equinox Deluxe Skin concept, hot off the presses courtesy of Eric Vedder! The concept is focused around a “Samurai Angel” for her Day version, and a “Demon Ninja” for her Night. 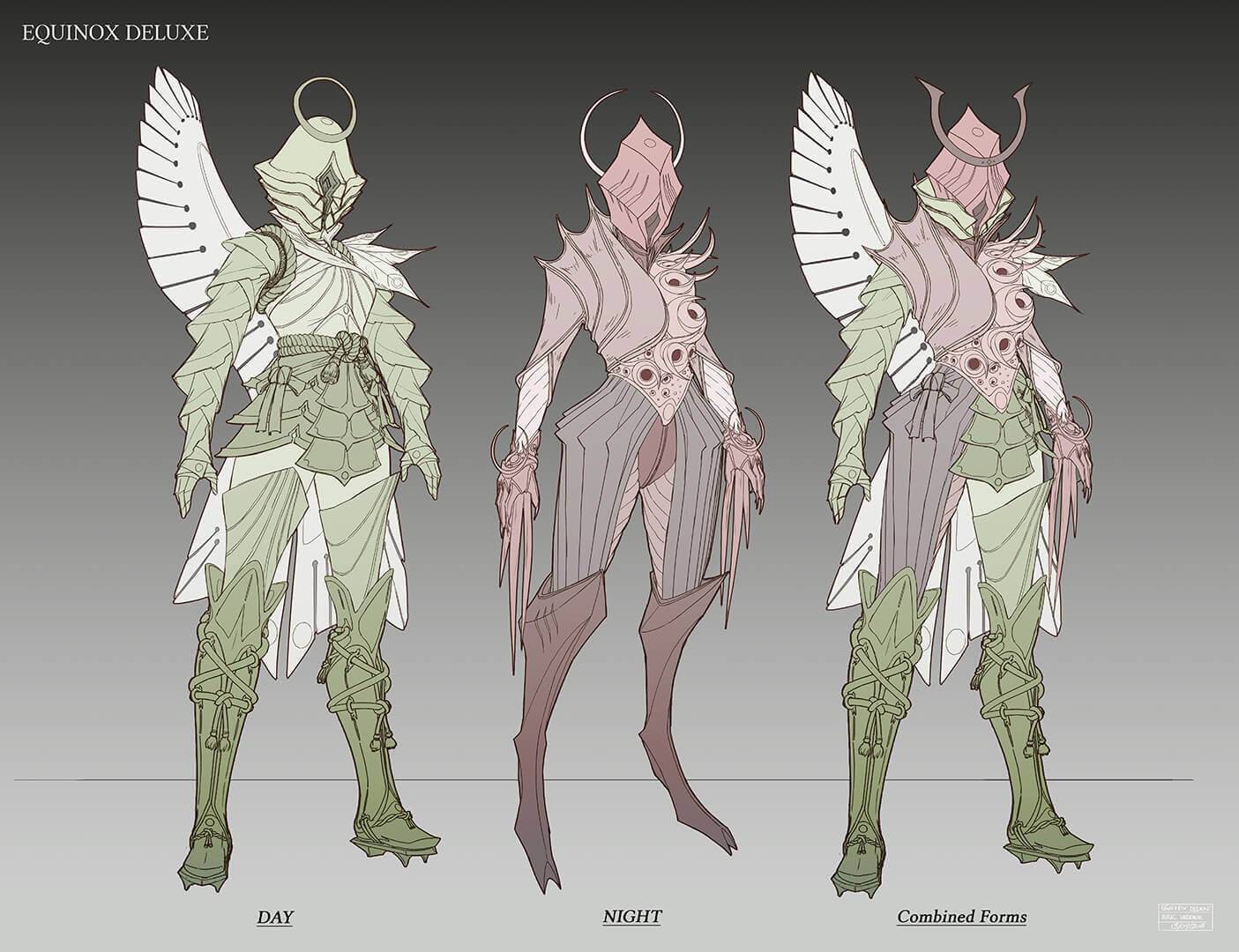 You might have seen blurry screenshots of this bad boy elsewhere but we wanted to show him off in his full glory. Chroma Prime will be coming with the Gram Prime and Rubico Prime, which were shown at TennoCon:

There are some design changes internally, so we’re not prepared to show you more of the system just yet! But we do have a fun change to share with you related to the fluidity of swapping between weapons.

With the new system, tapping your Quick Melee button will bring out your melee weapon completely, allowing you to make use of your stances. Shooting will bring out your primary or secondary (whichever was equipped before pressing quick melee) to help you rapidly and easily change up your gameplay:

There are two exciting changes on the Operator horizon for those of you heavily invested in your Tenno. Firstly, after much feedback, we will be adding A/B/C slots for the Operator suits and accessories. Faces and hair will not be included in these loadout slots, since those are integral to your Operator’s identity (and we don’t feel comfortable recreating Face/Off in our game):

Secondly, new hair is coming! We showed off some beautiful curls back in Devstream 106 but we have prepared some other styles as well. Here’s just one sampling of what to expect:

We’re hoping to ship these by Christmas at the latest, with the addition of another hair tint channel for ombre/frosted-tips goodness!

· A PS4 theme is coming with the Fortuna update, a preview of which you can see here! Icons still needed to be updated to their custom, Fortuna versions.

· Here’s some comparison shots of the Corpus Gas City Remaster This might be coming with the new mainline update, and will come with some lore foreshadowing.

Too busy ogling Nezha’s peachy-keen new skin to read our update notes? Worry not, we’ve compiled all of this week’s highlights down below:

[DE]Pablo has been working hard on tweaks, with two primary goals in mind:

For the sake of space, you can read more about this ability refresh in the update notes here.

Spider – can create inpenetrable snow storm around you that you need to figure out how to stop before you can hurt him.

Also known to laser you in the face.

We have made changes to have Thralls have more value in life AND death - just as Revenant did. The goal is simply to have an easy supply of Thralls to make use of in both Life and Death. Here’s what changed:

· It creates a damaging pillar that has homing projectiles similar to the alt-fire of the Phantasma!

· The pillars can now be exploded to output their damage radially if hit by Danse Macabre.

· You can now recast Mesmer Skin to recharge it! A charge will also be restored when using Reave while active.

· Revenant is now fully immune to damage while Reaving - it's meant to be a life-saver!

· When Reaving Allies with Mesmer Skin active, it adds the protective energy to your allies who happen to be in range.

· Slightly increased the spawn chance of Oxium Ospreys in all Corpus Defense/Interception missions at higher Waves/Rounds.

· Rhino now has a HUD buff indicator for his Iron Skin!

· Reduced the cost of Nav Coordinates required to craft the Mutalist Alad V Assassinate Key from 3 to 1.

· Reduced the cost of Animo Beacons required to fight Ambulas on Pluto, Hades from 40 to 20.

· Reduced the cost of Vestan Moss scans required to craft the Sunrise Apothic from 25 to 12.

We included some highlights in our previous volume of the Remote Observer, which you can read here, but here’s some more excellent changes and fixes that came in this update:

· Updated the ‘High Contrast UI Theme’ based on feedback in an effort to better aid colorblind Tenno.

· Fixed an issue with not being able to fully pause in Solo missions.