Sign Up
OPERATION: BURIED DEBTS
AVAILABLE NOW ON ALL PLATFORMS

Please Note: There have been some changes made to the Operation's pacing for its Console Release. More information is available here.

Deep in the bitter heart of the Orb Vallis lies a hidden mystery.

Band together to complete the first community event of 2019 and work to bring a secret to light in Operation: Buried Debts. Take control of Hildryn and her devastating Abilities as you unearth clues with your fellow Tenno and strike down enemies with the revamped Melee system. Act quickly, time is short.

Thermia fractures are cracking open the surface of Venus, a consequence of Nef Anyo’s unrelenting greed. He’s willing to do whatever it takes for a quick profit, including putting the whole Orb Vallis at risk. Over the next several weeks, work alongside the community and Solaris United to locate, uncover, and solve a multi-part Operation and the mystery lurking below the surface.

You’ll earn unique items throughout the Operation like an Emblem and Sigil, Amalgam Mods, and the Opticor Vandal, but you’ll need to take down a tremendous foe to unlock your final reward. The Orb Vallis has everything you need to begin.

The best defense is a good offense. Hildryn draws from her Shields to fuel her Abilities, while Energy works to recharge them. Take to the skies and rain down destruction with Hildryn, the newest Warframe.

SHIELD PILLAGE
Pillage a percentage of Shields and Armor of nearby enemies to replenish Hildryn’s own Shields and Overshields.

AEGIS STORM
Take to the skies and rain Balefire rockets down on the enemy. Nearby enemies are blasted into the air where they will create an Energy Orb every few seconds. When Shields run out the enemies are smashed into the ground.

A new spark of action has arrived with Phase 1 of the much-anticipated Melee revamp! With these changes, you’ll experience more fluid combat, and a smoother, faster, bolder system to harness as you slash your way through the Origin System. This first phase includes: 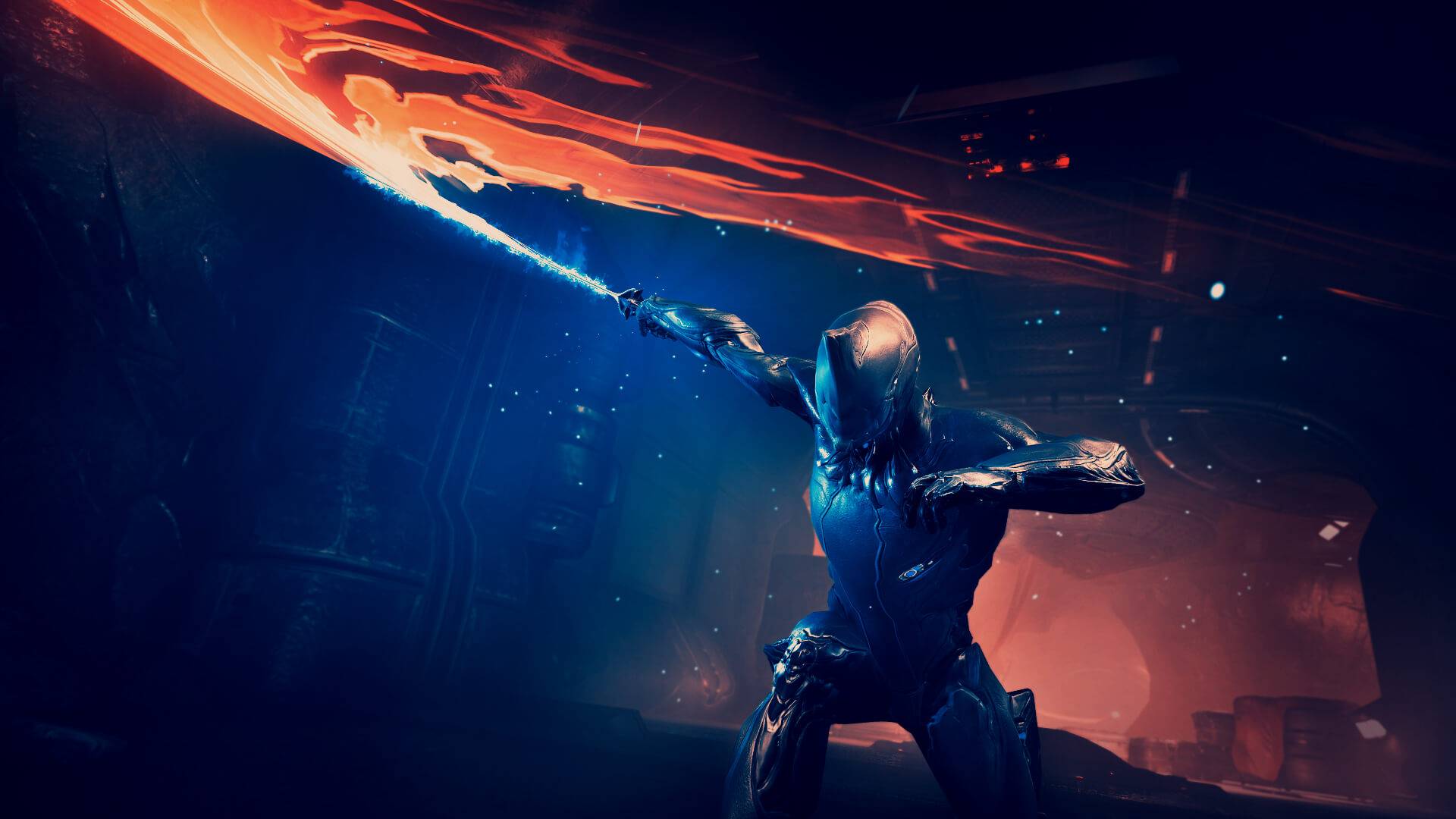 UNINTERRUPTED COMBAT
Immediately engage in all things Melee, without needing to lock yourself into Melee mode. This means seamless combat and combos -- no more interruptions between firearm and Melee!

COMBO RESUME
When interrupting a combo with gunfire, dodging, bullet jumping, or any parkour your next Melee attack will begin exactly where the combo left off !

KEYBINDING CHANGES
Blocking is now automatic and is no longer keybound! The 'F' button exclusively swaps between Primary and Secondary weapons with a tap. Your mouse is now all gunplay; the left is gunfire, and the right is aim. Worry not Tenno, if you used your mouse to melee attack, there's a toggle option for you.

These changes are just the beginning as we iterate and improve on our Melee system. You can find everything you need to know about Melee: Phase 1 in our Dev Workshop.

Introducing a new way to customize your Warframe: Ephemera! These effects can only be earned and crafted by the brave through a variety of ways including Arbitrations, the Stalker, and Elite Sanctuary Onslaughts. Once crafted, they'll appear in your Arsenal under ‘Attachments’!

Expand your personal armory with these new Weapons and Customizations:

LARKSPUR
From death blooms the Larkspur. A unique and menacing Arch-gun with a wild initial attack that locks onto a target then chains other targets close to the first. It also sports an explosive projectile mode. In Hildryn's grip the Larkspur carries more reserve ammo.

HILDRYN ASURON HELMET
The battle-visage of a formidable warrior. Inscrutable as a monolith, implacable as a hammer-blow. 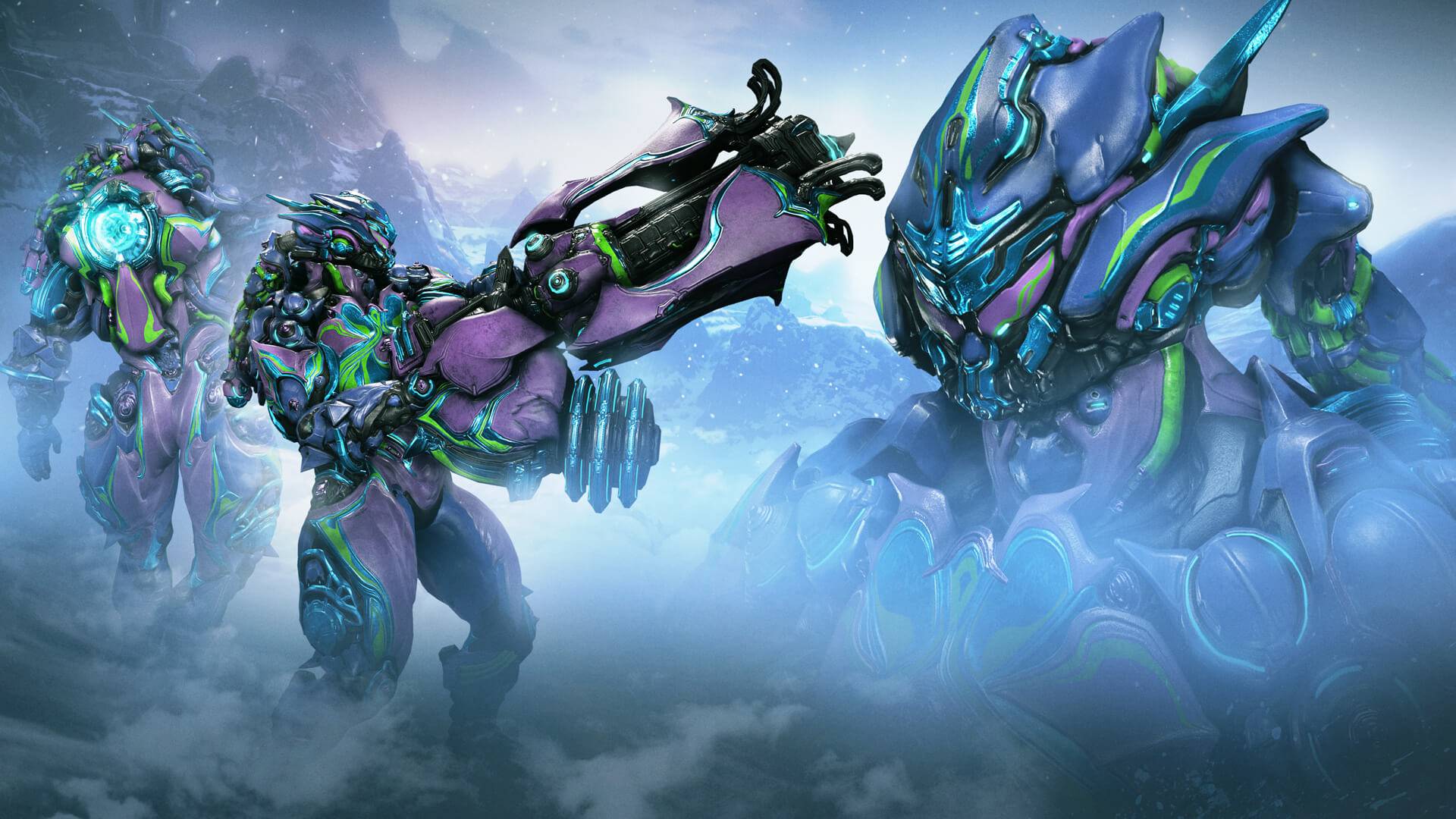 K-DRIVE MODULAR PARTS
The Vent Kids have been hard at work, Glinty! They’ve scavenged some new modular K-Drive parts to customize your ride with. Since a recent Hotfix, we’ve increased the Standing you earn from competing in K-Drive Races -- so you can unlock these parts even faster. 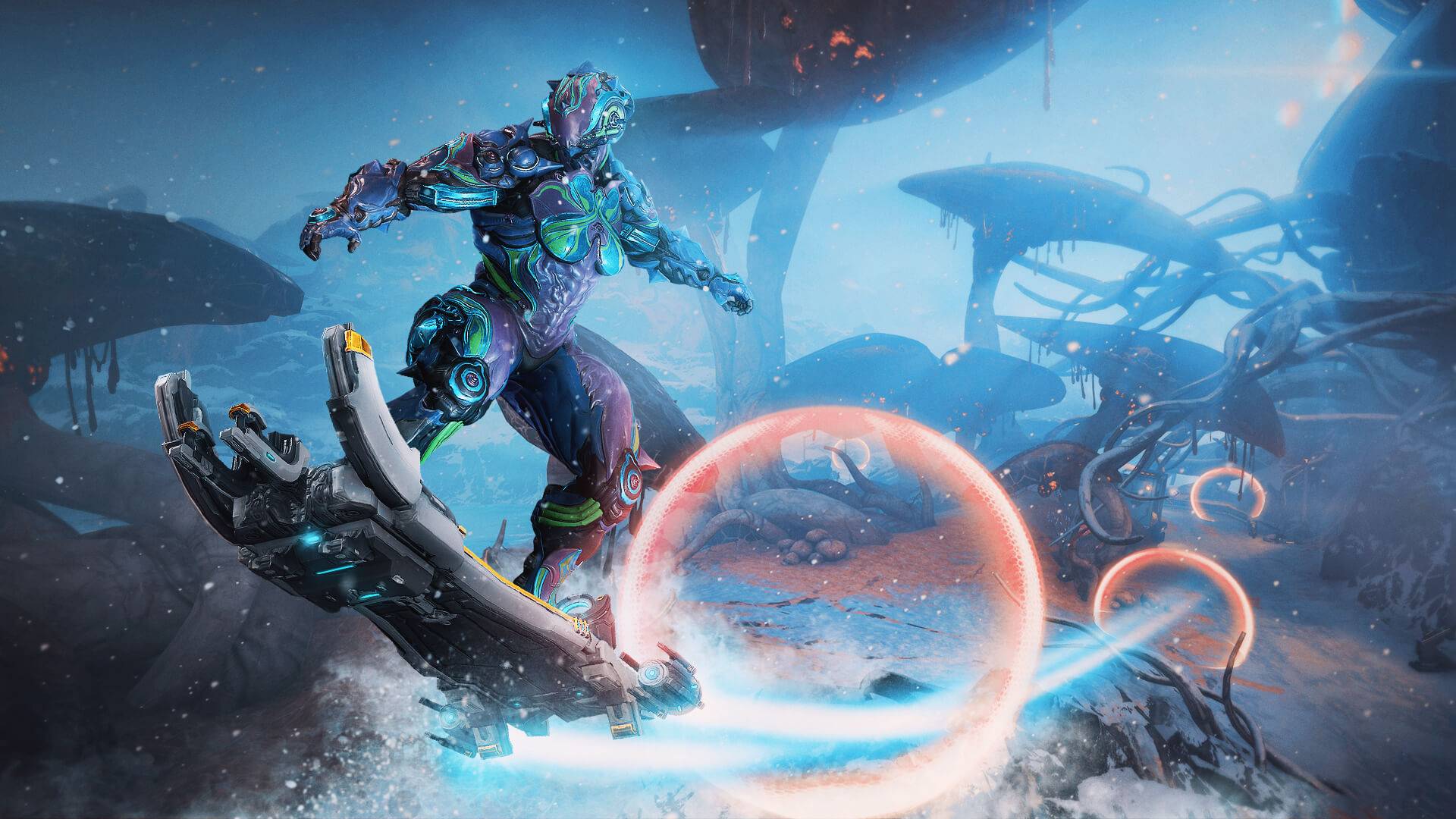 LIMBO LIMINA SKIN
War-garb for the liminal; a new form for the in-between.

INTERGA SUGATRA
This Sugatra has been seen adorning the weapons of myths and monsters alike, its provenance unknown.

TATSU
Fearsome and noble, the elegant two-handed nikana is the pride of any arsenal. 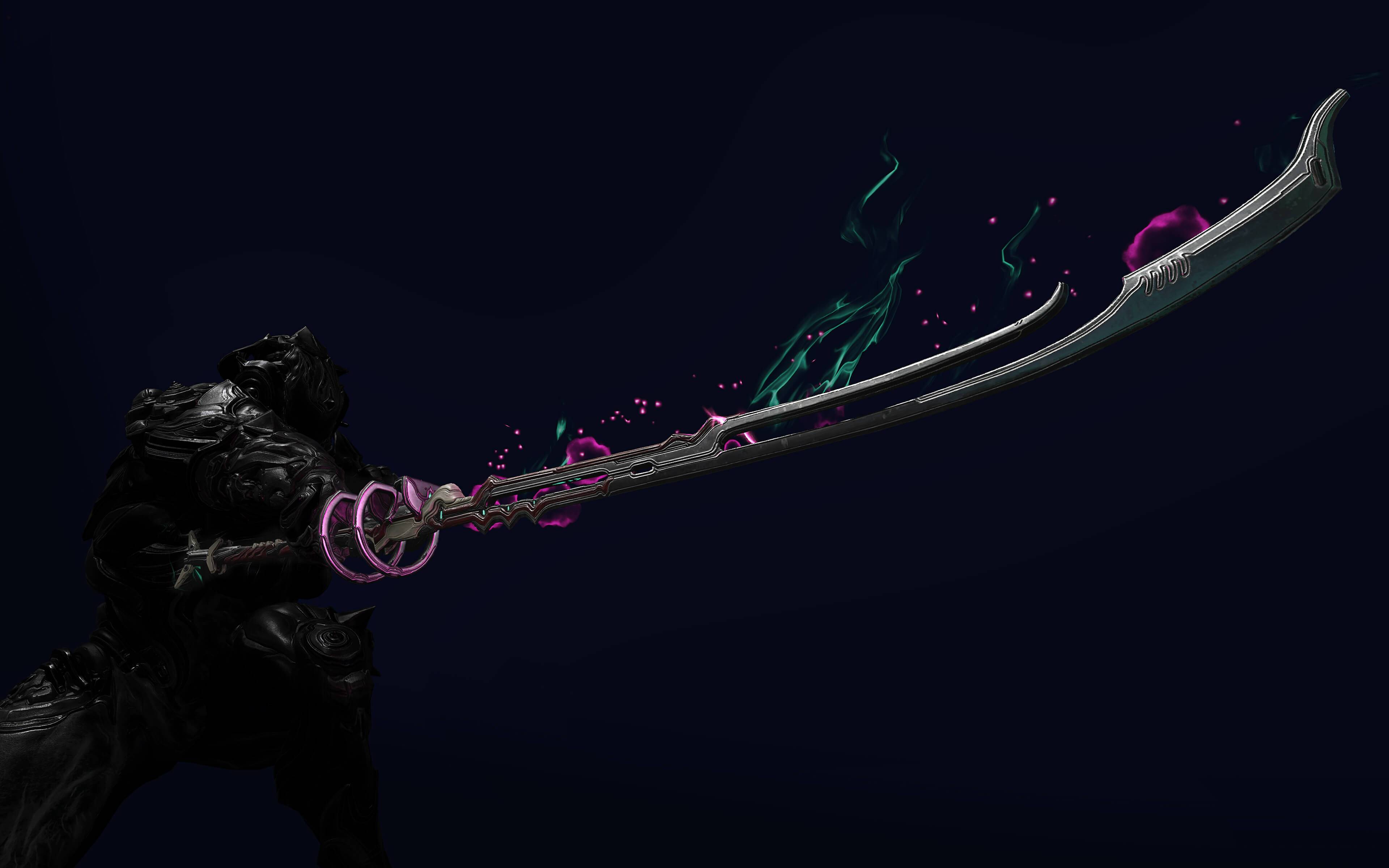 CURLY OPERATOR HAIRSTYLES
Three new curly-haired Operator Hairstyles are now available! Choose from a bun, braid, or ponytail. In addition, a fix has been applied to Operator hair to show less scalp. 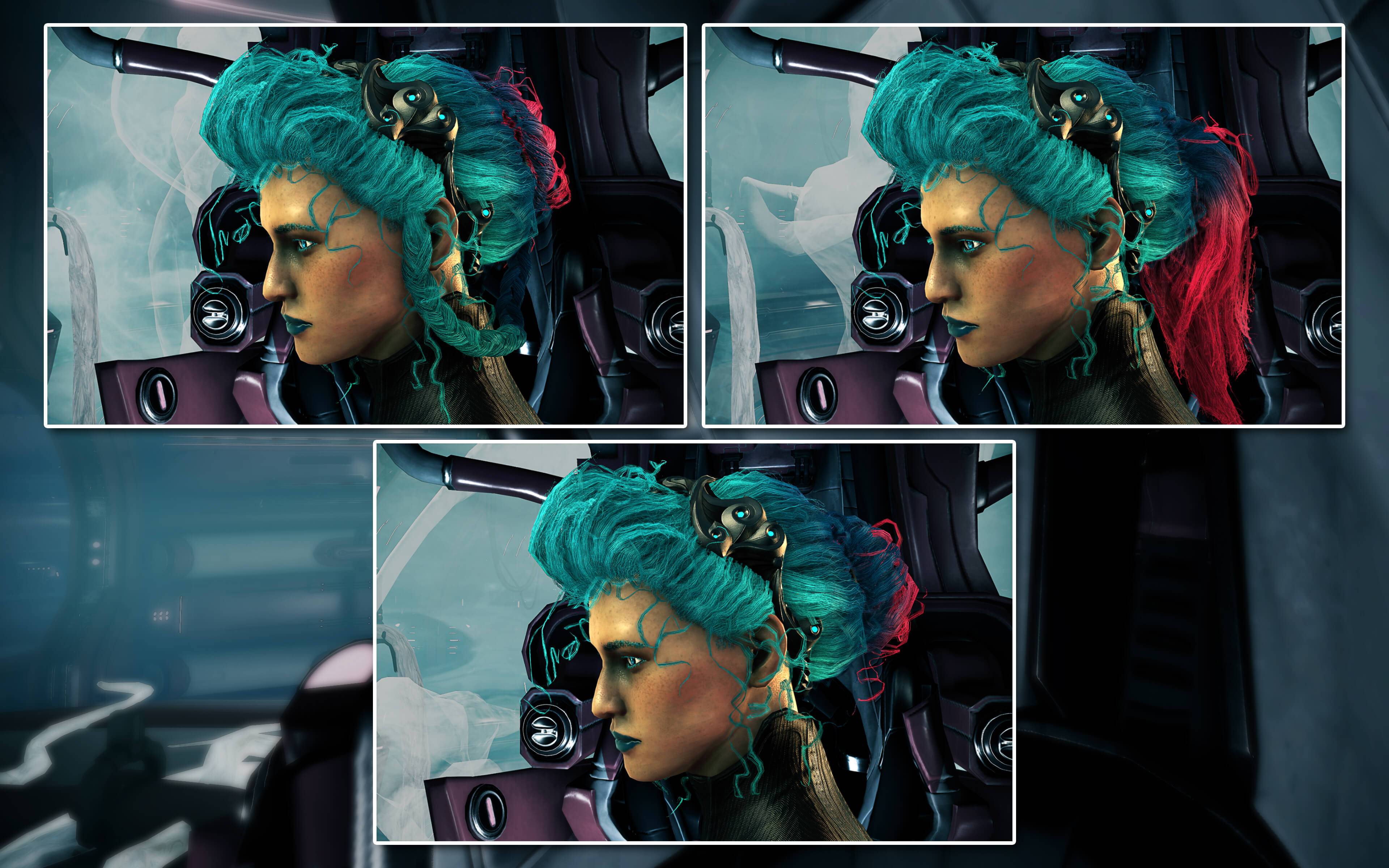 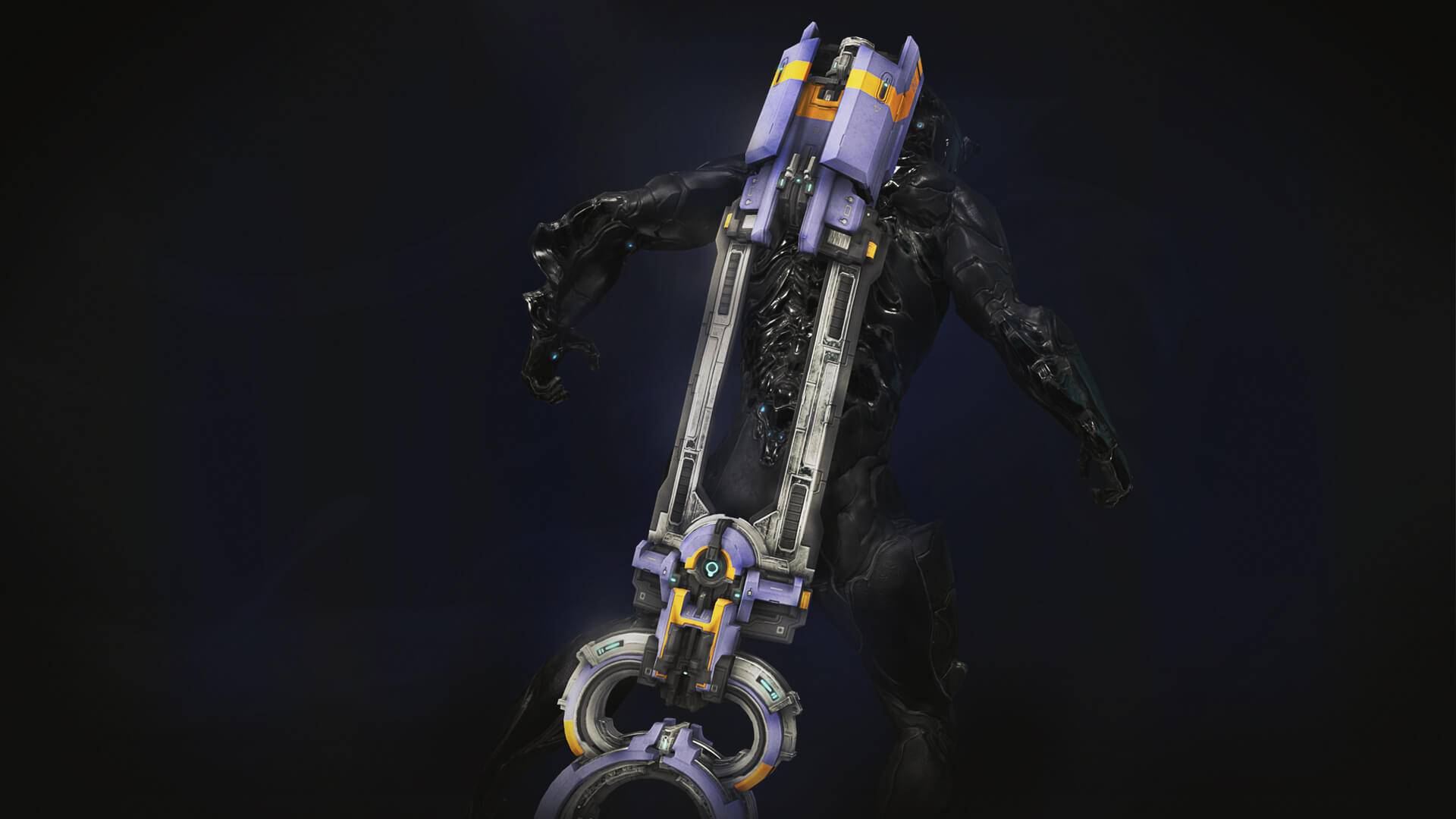 • Individual Extraction: You can now extract individually from Survival, Excavation and Defection Missions. This means that if one player decides to leave at 10 minutes, the rest of the squad can soldier on!

• Weapon Swapping: Weapon Swapping is more responsive than ever! Client-side weapon swapping means that you should experience less lag when switching between weapons.

• Collect Bounties in the Plains of Eidolon: Tents have been placed throughout the Plains containing a console that allows you to contact Konzu himself and acquire new Bounties!

Along with this update, Nintendo Switch players can enjoy two additional TennoGen Bundles: